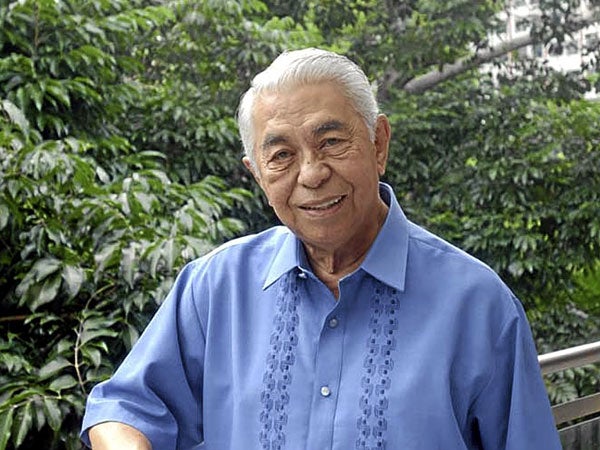 Tony Joaquin: Nick Joaquin was “too much of a free spirit” (photo by Romy Homillada)

The Nick Joaquin he knew

Ever creative and enigmatic, Nick Joaquin ranks among the greatest Filipino writers of all time. He certainly towers over everyone else when it comes to writing in English. Here was that rare exemplar who could do everything well. He wrote poems, short stories, novels and plays, and constructed powerful journalistic essays under his pen name Quijano de Manila. He also became the most sought-after biographer in Philippine literary history.

But as much as he was publicly admired and his work loved by generations, Nick himself was a quiet, sensitive man whose inner workings were known to very few. He was one writer who kept to himself all the time. Beloved fiercely by those close to him, Nick left a gaping void when he died in 2004 at the age of 86.

Now, thanks to the vividly engaging biography “Nick: A Portrait of the Artist Nick Joaquin” by Tony Joaquin and Gloria C. Kismadi, readers finally get a compelling glimpse of how this National Artist for Literature became the writing giant that he was. Published by Anvil Publishing, the portrait is anchored on  the memory of a nephew who fondly remembers his uncle.

Antonio “Tony” Cabigting Joaquin turns 81 on August 24, but still remembers a lot about his famous uncle. “He was a very warm person. In fact that word ‘giving’ is very much like Nick,” the younger Joaquin writes.

From the biography that his nephew wrote, we learn that:  Nicomedes Marquez Joaquin was born on May 4, 1917, the fifth of ten children, to lawyer Leocadio Joaquin and teacher Salome Marquez. Tony got to know his uncle when Nick began staying on and off with his parents, Porfirio or Ping and Sarah, in what they called the “big house” on Arlegui Street. Ping, the eldest of Nick’s siblings, was a gifted pianist and was often out in the evenings performing. “There was some kind of an arrangement made,” Tony says.” “My mother was alone in the evening, so my father asked Nick to keep her company. They hit it off very well.”

The most illuminating and voluminous portion of “Nick” is definitely the chronicle of Nick Joaquin’s early growing up years. The book focuses heavily on Nick through the prism of his family. To his nephews and nieces, he was Tito Onching, generous and kind, whose Roman Catholic faith was one of life’s most important pillars. “The family had known, even from the time Nick was still very young, that he believed he had a vocation for the priesthood. His spirituality showed in the way he lived his life. He never missed daily Mass and prayed the rosary everyday.”

Nick would later be given a scholarship by the Dominicans to study at St. Albert’s Monastery in Hong Kong, but he only lasted a year before returning to the Philippines. “He was too much of a free spirit,” Tony adds.

There are many memorable scenes in “Nick,” but probably the most heartbreaking was that of Nick surveying  the ruins of Intramuros after it had been razed to the ground during  the Second World War: “Intramuros was so familiar and close to Nick’s heart. He knew where each building had stood. As he gazed around him and took in the destruction and realized all that had been destroyed and lost, a deep loud groan escaped from him and his body began to shake all over as sobs rose from the very pit of his stomach.”

The book then follows Nick as he rises to the top of the literary scene. And here we begin to see the Nick that the public knows, the prolific award-winner. Here we can imagine the man who wrote “May Day Eve,” “The Woman Who Had Two Navels” and “A Portrait of the Artist as Filipino.” Here we can imagine his distinctive profile, even remember the deep, grainy voice that belied his gentleness. And of course, the drinking:  “On the other side of the spectrum, others today are more familiar with the way he guzzled down his beer, although family and those close to him attribute his drinking habits to his need for a crutch to loosen his tongue since in reality, Nick was quite shy. This began only after he had gained some degree of popularity and would be asked to talk and then be surrounded by admirers. Close friends attest to the fact that despite all the beer he drank, Nick was never drunk. He may have acted it, but he knew exactly what was going on around him all the time.”

“Nick” introduces the people close to his heart, detailing the start of longtime friendships with stalwart companions like Gregorio Brillantes and Pete Lacaba, as well as Nick’s time at publications like the Philippines Free Press.  Nick would become an inspiration to many other writers, and their tributes are collected at the end of the book, words from the likes of Jose Garcia Villa and Carmen Guerrero Nakpil.

As he grew frail in his later years, Nick kept to himself apparently. “He never saw the doctor. No check-ups, nothing. He never said anything,” Tony muses. “I suspect he was sick of something and that he knew it was going to kill him, but he never told anybody. He never complained so no one knew.”

Nick died on April 29, 2004 quietly, at home. Tony found out via e-mail from his cousins based here.  By then, Tony and Chita were living in retirement in Antelope, California. “I grieved for several days,” Tony recalls. “And when I was writing the book, I felt [the loss] again.”

It later occurred to Tony that someone had to write about the Nick – “Tito Onching” – that his family loved. Tony had taken seven years to write his own autobiography, “Simple Glories,” and so this task fell naturally to him.

“If I didn’t write it, no one would come out to write and no one would know what to write about. It might sound immodest, but I was the only observer close enough to know how he was. I thought, I’d better write this because it was about time.”

Tony makes for a fittingly interesting biographer, having taught extensively as a trainer for human resources in schools, among them the Far Eastern University.    He has also worked for the United Nations in Ethiopia, before settling in San Francisco, California. It would take Tony two-and-a-half years to finish “Nick,” collaborating with longtime friend Gloria Castro Kismadi, who is based in Jakarta.

Launched in July, “Nick” presents a unique view of the National Artist: “The most surprising thing about him was that he earned millions but he died a pauper. He didn’t know how to manage his finances.” says Tony, who described a typical Nick Joaquin day: “He would write all day and then, when the sun goes down, there would be a taxi that would pick him up. Nick never drove. He’d go bar-hopping or hotel-hopping. The only thing he would drink was San Miguel Pale Pilsen. Then when the waiter delivers the beer to his table, he would tip the waiter one hundred bucks!”

Nick would give readily to those in need – perhaps a bit too generously. “He should have managed his giving,” Tony says. “Because he didn’t have any money left for himself.”

He may have finished writing his uncle’s biography, but Tony isn’t quite through burnishing the Nick Joaquin legend just yet. “I might need some technical help, but I’m vaguely toying with the idea of doing a Nick Joaquin documentary,” he says. He has after all done a lot of directing of such TV shows as “Student Canteen” and “Two for the Road,” as well as managed channel 13. “I’ll need not just the still pictures but commentary from Pete and the rest. Maybe I’ll go to UST. (The docu) doesn’t have to be long, maybe ten minutes, but it’s still up in the air.”

“Nick: A Portrait of the Artist Nick Joaquin,” according to its author, is  just the tip of the iceberg as far as telling more stories about  life and times of Nick Joaquin is concerned: “This is just the start, and I encourage others to write more about Nick.” •

“Nick: A Portrait of the Artist Nick Joaquin” is available from leading bookstores.