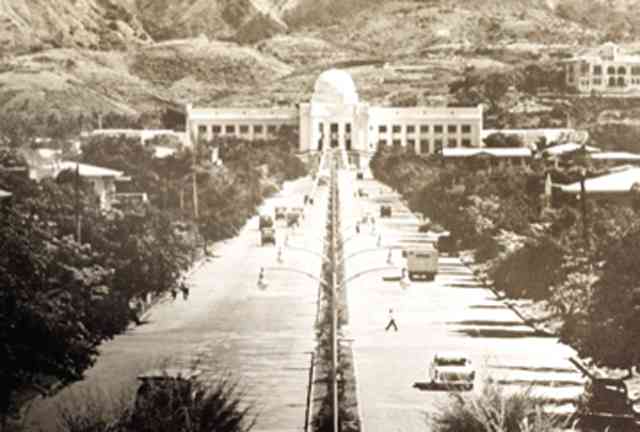 A SIMMERING river of concrete leads to the Cebu Provincial Capitol.

We’ve had to endure the summer heat long enough. Thank God summer is ending; the rains are insinuating the impending arrival of the wet season.

But despite sporadic rain, heat and humidity still remain. Summer is not ending as quickly as we’d like.

It’s been a deadly summer. We simply sweated it out when temperature soared to record heights that even tropical Filipinos have seldom, if not never, experienced before.

The 21st-century Filipino pastime has adapted into spending the day cooling off in an air-conditioned mall. It’s a great way to avoid the heat.

Malls have replaced the town plazas—open areas where older generations would spend late afternoons, strolling or sitting on benches in the shade to catch up (gossip) with friends and neighbors while children played on the lawn.

It may have become that the neighborhood plaza is an anachronism no longer appropriate for the lifestyle of today’s urban Filipino, but certainly its social, and especially its environmental, values continue to be very relevant.

Socially, the plaza was the town’s living room, where townspeople would go to see each other; where their children played with friends; and where social events like dances, concerts, or political rallies were held.

As hard as they try to, malls cannot substitute the intimacy and familiarity that a town plaza has offered to generation after generation of local residents.

Equally as important are the environmental qualities of the plaza, the most obvious being that it is the green lung for the town.

In many plazas around the country, the heritage trees are routinely being cut down in the name of modernization and landscaping. Grass is being replaced with concrete, and the planting that once abounded in the open plaza space is now confined to designer plant boxes and concrete urns.

Needless to say, the loss of the green canopy, compounded by the heat generated by the designer concrete, renders the plaza useless in the daytime, and still uncomfortable in the late afternoons until the concrete cools down in the early evening.

The old town plaza, where people could gather under the shade of age-old trees all day long, is gone.

Urban green is becoming rare in rapidly developing cities where our new image of growth is measured by how much concrete can be poured over the environment. And like the town plaza, the more concrete that is poured, the hotter the place becomes.

There are still outdoor places to go to in urban Philippines to escape the summer heat, where trees still shade people and provide fresh air to breathe; where a breeze can usually be coaxed into cooling down our bodies.

We need more trees to cool down our cities and make our summers more bearable.

Pictures of some of these green places are shown, but surely there are more places like these that are unknown to many.

To find these unknown places, we make a request to readers from all over the country to e-mail pictures of green places that they know.

Who knows, after receiving your pictures, we may find out that our cities are greener than we think.

E-mail your pictures to [email protected]