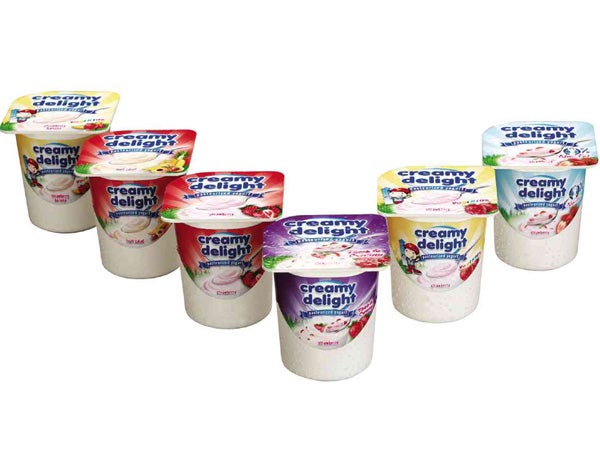 Used to be that yogurt, a fermented milk product, was only for a select group of people who loved its acquired taste, appreciated its health benefits, and could afford its dear price.

Then, a few years ago, frozen yogurt hit the malls and endeared itself to a broader spectrum of consumers, mostly young ones. Still, ordinary people were reluctant to try yogurt.

That shouldn’t be the case now.

Selling for only P15-P20 a cup—almost half the price of the leading brand—and readily available at your corner sari-sari store, Creamy Delight is out to expand yogurt’s growing market.

The new yogurt brand found its way to Manila through a joint venture with Asia Brewery Inc.

Interestingly, what sets Creamy Delight apart from other brands is the sophisticated method by which its yogurt is produced—fermented and pasteurized using ultra-modern technology that preserves its nutritional values and allows it to be stored at room temperatures without spoiling.

(Pasteurization is a process that kills bacteria by heating milk to moderately high temperatures for a short period, then rapidly cooled.)

Inquirer Lifestyle had a chance to meet GLP executives and visit the company’s much-talked-about plant in Madrid one cold afternoon two weeks ago.

GLP, a 44-year-old family business, is a food and beverage industry leader in Spain. It was founded by the late Tomás Pascual Sanz, who, at age 12 during the post-war period in Spain, started working by selling sandwiches at the train station in Aranda de Duero (Burgos). He earned a strong reputation as a food distributor and feed manufacturer in the area.

In 1969, Aranda de Duero’s dairy factory went bankrupt and the local savings bank asked Sanz to take over and save the bottling cooperative from closure. This was the beginning of a successful business venture. In just a few years, GLP evolved from being a single-product company to a diversified business.

Today, GLP has a range of more than 200 products, including flavored yogurt, rice puddings, milk and fruit juices; it operates nine production plants with over 2,500 employees.

“My father was a salesman and a teacher,” said Tomas Pascual Gomez-Cuetara, son of Sanz and president of GLP. “When he was alive he taught his people how to manage life and business, how to make decisions and become a good entrepreneur because he was an entrepreneur himself.”

The company exports its products to over 70 countries.

“Success is the result of doing things right,” Pascual said. “My father would always say that if you do things right, good things will come. To sell and be successful, you do the right things with the farmers, workers, clients and employees. They will pay back your investments.”

Pascual was in Manila late last year to formalize GLP’s commitment to supply quality yogurt in the Philippines and partnering with Lucio Tan’s Asia Brewery. Through AB’s nationwide

distribution network, even people in far-flung barrios will be reached.

“We signed with Asia Brewery because it has the characteristics we are looking for—a big company and a family-run business,” said Tomas Melendez, GLP managing director.

The partnership, called AB Pascual Foods, aims to develop the yogurt market in the Philippines with possible expansion to Southeast Asia.

“The Philippines alone is a very huge market with a 90 million population growing two percent per year,” added Melendez. “For us, the Philippines is the perfect platform to introduce Creamy Delight in the (Asian) region.”

If the demand for yogurt increases, the prospect of building a factory in the Philippines to supply neighboring countries is not farfetched.

In the meantime, Creamy Delight products are imported from Spain.

TV personality Maricel Laxa-Pangilinan and son Benjo have been tapped as endorsers.

The brand name Creamy Delight is exclusive to the Philippines. In Spain and other countries, GLP calls its product simply as Pascual yogurt.

“We would like to build the brand from scratch,” explained Melendez. “It is easier for us to build a new brand in the Philippines with our new partners. When you try our yogurt, you will really say it’s creamy and delicious.”

Creamy Delight’s taste-and-flavor profile has been slightly altered to suit the sweet palate of Filipinos.

“In Europe, we prefer our yogurt a bit bitter, not too sweet,” Melendez said. “The Philippines, however, loves sweet food with vibrant colors. So, we’ve made the yogurt a bit sweeter. But, we have a nonfat variant for the health conscious.”

No need for refrigeration

One serving of Creamy Delight is equivalent to ¾ glass of milk. It is gluten- and lactose-free, and comes in four variants: Thick & Creamy, Yogikids, Flavored and Non-Fat.

The fact that Creamy Delight yogurt doesn’t need refrigeration at all (but is best eaten chilled for sensory-rich eating satisfaction), makes it more affordable and easily available.

The non-refrigeration process has been perfected by the Spanish company. “That’s what we want to take advantage of because we can take this product to almost every place in any market,” said Pascual.

Pascual explained that in Europe, there are two ways of making yogurt—the French way and the German way.

“The first (French) way is to simply ferment the milk and the bacteria,” Pascual pointed out. “But, it’s difficult to control the fermentation because you usually get more acid and a tough, steel-like yogurt.”

(Fermentation is a process by which food or drink goes through a chemical change caused by enzymes produced from bacteria or microorganisms or yeast. It alters the appearance or flavor of foods and beverages, such as beer, cheese, yogurt or wine.)

In the German way, Pascual said, “you produce the yogurt in a steel tank where you ferment the milk. This way you have a better control of the fermentation. Once you have the fermentation, you move the product to different pipes and tanks to transform its thickness and obtain a more creamy, consistent produce. Then, you pasteurize.”

To have a better grasp of what Pascual was explaining, we visited GLP’s vast factory in Aranda, about a two-hour drive from Madrid.

Marco Delgado, GLP director for innovation, said that the plant uses about 1 million liters of milk every day—700,000 liters go to its packaged liquid milk, juices, and 300,000 liters to other products like yogurt.

First stop of the tour were the milk and fermentation areas, where gigantic tanks (eight of them) and cylinders are connected by huge pipes using highly automated equipment. As we moved along, we saw more gigantic metal tanks and smaller tanks (each carrying 1,000 kilos of real fruit pieces) connected this time for the flavoring.

Everything is done by machine, from filling and blending stations to fermentation and pasteurization.

The yogurt factory is divided into various operations: the milk is first fermented, then pasteurized. It is then added with real fruit bits, pasteurized again, and packed aseptically.

(Aseptic packaging is a system of packaging products with a minimal amount of air inside. Because oxygen is the major contributor of spoilage in foods, aseptic packaging can retain the product’s freshness for months, even years.)

To ferment the milk, Delgado said, the yogurt bacteria, specifically lactobacilus bulgaricus and streptococcus thermophilus, are added into the milk. After about 24 hours, the milk turns into yogurt.

“During fermentation, the yogurt becomes very acidic and there is water separation,” explained Delgado. “The yogurt shrinks, water escapes and remains on top. This is something we don’t like to happen because it becomes susceptible to contamination with other bacteria. For that reason, normal yogurt is kept under refrigeration and is shortlived.”

Therefore, the plant pasteurizes the yogurt to kill all the imperfections.

“It is through the pasteurization that we get long-life yogurt that is edible after many months without any kind of nutritional deterioration or microbial attack or danger to the consumer. That’s the combination of the pasteurization and aseptic packaging,” said Delgado.

Once the cup is sealed, its commercial life can be seven months or longer.

An area in the plant contains several conveyors carrying the sealed products. Next room is a place where crates upon crates of yogurt products are lifted, sorted and packaged by robotic machines.

Final stop was the laboratory with different equipment for analyzing and measuring compounds.

“The lab room is a sophisticated area to analyze anything you can imagine, such as flavors, vitamins and nutrients,” said Delgado, showing off tiny vials and test tubes and placing them in a white rotating contraption. “We want to ensure the nutritional quality of our products during its commercial life.”

Most of the people working in the lab are chemists, pharmacists, engineers, biologists and even veterinarians.

Delgado also showed us, through a microscope, samples of the live bacteria that are used for fermentation—they look like worms moving in different directions.

GLP buys the bacteria in pouches from four big companies in Europe that culture the yogurt bacteria. The frozen bacteria look like white pebbles and melts in your hand when you hold it.

In the Philippines, Creamy Delight has a growing market. Last March, it sold about 1 million cups.

“It’s a steady growth,” said Ricardo Antunes, AB Pascual country manager. “We went out of stock twice, which sort of brings down operations. But, it’s a good problem. We have about 500 sales people every day in the streets and these people reach almost 300,000 sari-sari stores.”

As part of its advocacy, Creamy Delight has been participating in various feeding programs organized by the Department of Education.