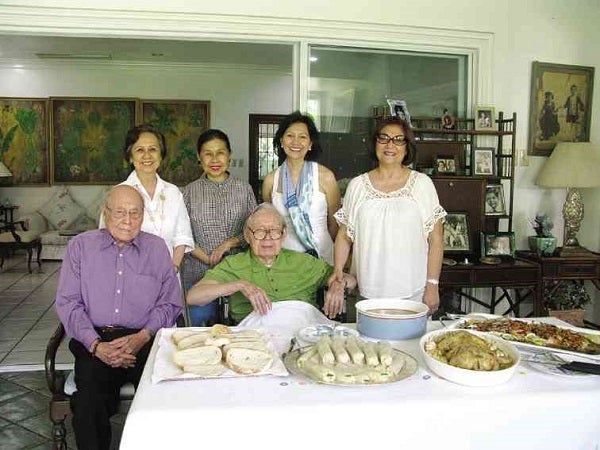 TITO PEPING and Tito Marcos with nieces behind them, from left, Sylvia, Ninit, Tina and the author

One call from cousin Tina is all it takes to set the plan in motion, inviting ourselves—Sylvia, Ninit, Tina and me—to lunch with a favorite uncle, Marcos. As it happens, we are, by his own public declaration, his favorite nieces from our paternal Rafael Roces-Inocencia Reyes line.

Feeling thus entitled, we presume he wouldn’t mind us preempting the celebration of his 96th birthday on Dec. 16 a half-year early—it is only April. Unlike on his 95th, this time we’re sure to have him all to ourselves—“a solos,” as he might say in our home tongue.

Tito Marcos has been the oldest living Roces since three years ago, when Dad, his first cousin closest to his age, died, five months short of his 92nd. Tito Marcos is the only son of our Lolo Rafael’s youngest brother, Marcos Senior, named for his own father as is his own son, nicknamed Mark.

Marcos as a first name has been revered among the Roceses, thus repeated, through generations, if sometimes to the confusion and annoyance of people who have had to deal with it. (Of course, having been dragged into historic ignominy by a man who owned it as a surname, the name Marcos is likely to survive longer.)

It is, however, second only to Alejandro, a name perpetuated from a progenitor much beloved as the archbishop of Asturias, where the Roceses trace their roots.

Lolo Marcos was closest to our grandfather, Rafael, in age, heart, mind and inclinations. “They were so close they were together almost all day of every day,” writes our youngest uncle, Alfredo (Ding), in his book of family history, “Looking for Liling.”

They breakfasted together, worked in the same office, in fact sharing a desk, came home to Lolo’s house for lunch. The most endearing detail of their closeness is that, before going back to the office, they took siesta together, with Lolo flanked by Lola and the welcome interloper, on the same bed, a vast four-poster kamagong, which survived the war and on which I myself, as a child living with my grandparents, sometimes took siesta with them.

It was at a rare time of separation—Lolo Rafael was overseeing the family’s horse-and-cattle farm in Bukidnon—when Lolo Marcos was suddenly taken fatally ill of something misdiagnosed and mistreated as appendicitis.

His death, by Uncle Ding’s account, changed my grandfather’s life. Almost overnight, he lost all interest in outdoor sports; he never went hunting or fishing again. But he welcomed the opportunity to be second father most especially to his nephew, Marcos, when his two sisters had chosen to live abroad with their mother.

Next to Tito Marcos in seniority is Dad’s younger brother Peping, 92, whom we have invited to the impromptu lunch to console him. He recently lost his college sweetheart, with whom he became reconnected after they both had lost their spouses.

“Como estas, Tito Peping?” I greet, planting a kiss on his forehead. My question unanswered, in fact unheard, he announces in a booming voice that “for the first time” he has forgotten both his wallet and his hearing aid. The party thus becomes louder.

“Malos senales, creo que es porque no tengo mas love life!” Bad signs, he bellows, giggling, attributing the memory lapse to a vanished love life. He reminds me of Dad, a giggler, too, although like Tito Marcos, atypical of the Roceses, not hard of hearing.

“Ay, basta ya de love life, Peping!” Enough of this love life, he sanctions his younger cousin as he welcomes him with a hug.

The dining room walls are like an album of memories. The whole house, in fact, is rich in memorabilia of a life long and well lived. On one wall hangs a huge painting of the Ideal, the family cinema he managed, on another pictures of him with Hollywood stars, and on yet another a plaque of his Separation Qualification Record from the US Army.

Tito Marcos made captain and was among those who landed on the beaches of Normandy in the war. His survival, he claims, transformed him into a prayerful man, keeping his part of a pact with the Blessed Mother to pray the rosary three times a day and attend Mass daily.

He points to a picture of him with Robert Taylor, a heartthrob of the ’50s. “In case you can’t tell,” he says, “I’m the one on the right.”

Oh, but he’s himself as handsome as they come, and so is his son Mark, his father’s son not only in looks but also in mannerisms and gentlemanly ways.

Tito Marcos’ memory is still amazing. He challenges anyone to play the memory game with him involving tennis Open champions, where and when they made their names, and has found a worthy challenger in my husband, Vergel, who gives him pleasure beating him—a very rare pleasure.

But, of course, he can go back to when tennis was first played internationally. He was quite a tennis player himself. He had owned a home court until he moved from Forbes to Alabang and back again to Makati, this time in Dasmariñas Village, to be near Makati Medical, when Tita Tuting became delicately ill.

He’s a romantic at heart. Until he’s had to use a wheelchair after a fall, he was a regular at the Manila Peninsula Hotel at lunchtime to listen to the pianist. We cousins knew where to find him and sometimes joined him there. He knew the old songs by heart and sang along with a proper voice, looking momentarily transported in time.

Lunch is laid out simply but elegantly, with fine silverware, crystals and china on a table for 12 covered with embroidered tablecloth. Except for the sudden increase in volume whenever Tito Peping speaks, the conversation attests to the keen memory of the two older men exchanging stories about Cine Ideal, which Peping later co-managed, about movies, and about other family memories.

Too soon, after brewed coffee and apple pie a la mode, siesta time comes and, after proper goodbyes, Tito Marcos is wheeled back to his bedroom.

In the company of our two oldest uncles, we are not only forced to speak Spanish but taken back to a golden time and place for family and country for that matter, a time when delicadeza, palabra de honor and other refinements meant something—was in fact the order of the day.

Tito Marcos likes to tell the story of a time he borrowed money from Lolo Rafael and, in exchange for his check, handed him a promissory note, which Lolo promptly tore up: “Between us… no need for this.”

Tito Marcos is living proof that once, just two generations ago, there was, indeed, such a time and place.