When Harry meets Mithi and all that jazz | Inquirer Lifestyle 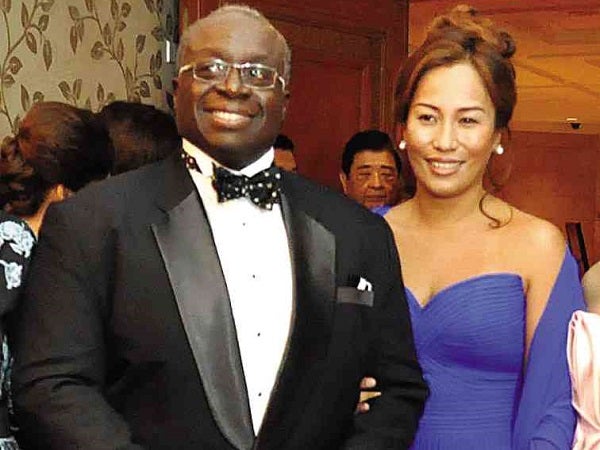 When Harry meets Mithi and all that jazz

MANILA, Philippines—Outgoing American Ambassador Harry K. Thomas Jr. loves music, particularly jazz. During a jazz festival, he was sighted with a dusky, voluptuous Filipina with a tattoo who leaned against his shoulder.

Since early last year, columnists have been writing about the envoy making sweet music together with Mithi Aquino (no relation to President Aquino), a human resource training officer of a British-American cruise line. She hails from Pampanga.

It has been said that they met on a cruise. They tried to be discreet about their relationship, with Thomas keeping their photograph in his private enclave away from the eyes of visitors.

In the past few months, they have been seen more often, leading some columnists to speculate that the relationship was getting serious. Still, the couple kept mum. During receptions which offer buffet services, Aquino would get his plate and serve him with affection.

During their travels, Aquino would maintain propriety by paying for her fare and accommodations. When her two children would join the trip with Thomas, they would seem like one happy family.

At the Fourth of July embassy reception, Thomas acknowledged publicly for the first time Aquino by saying that they both would be leaving soon.

He will be going to Arizona to take up a teaching fellowship. From the way Aquino has been looking after him, it seems that she is ready to start a new life.

Thomas has served as Washington’s envoy to the Philippines since 2010.

In November 2009, he was nominated by US President Barack Obama to replace Kristie Kenney as ambassador to the Philippines. His nomination was confirmed by the US Senate on March 19, 2010, and he presented his credentials to then President Gloria Macapagal-Arroyo on April 27, 2010.

Thomas, who joined the US Foreign Service in 1984, served as director general of the Foreign Service and director for Human Resources of the US State Department prior to his current appointment. He also served as a special assistant to the secretary and executive secretary of the department.

The career ambassador also served as US ambassador to Bangladesh from 2003 to 2005, and in the White House as director for South Asia at the National Security Council from 2001 to 2002.

Born on June 3, 1956, in New York City, Thomas earned his bachelor’s degree at the Jesuit-run College of the Holy Cross in Worcester, Massachusetts. He pursued further study at Columbia University and holds an honorary doctorate of philosophy from Loyola University of Maryland.

After graduating from Holy Cross, he worked as an urban planner in New York’s South Bronx for three years before joining the foreign service.

In an interview with his alma mater’s official magazine in 2007, Thomas said his heroes were Jackie Robinson, the first African-American to openly play in the major baseball leagues since the 1880s, and Nelson Mandela, South Africa’s first black president.

Thomas, who grew up in Queens, was married to jazz singer Ericka Ovette. They have one daughter, Casey Merie. Reports from Marge C. Enriquez and Inquirer Research