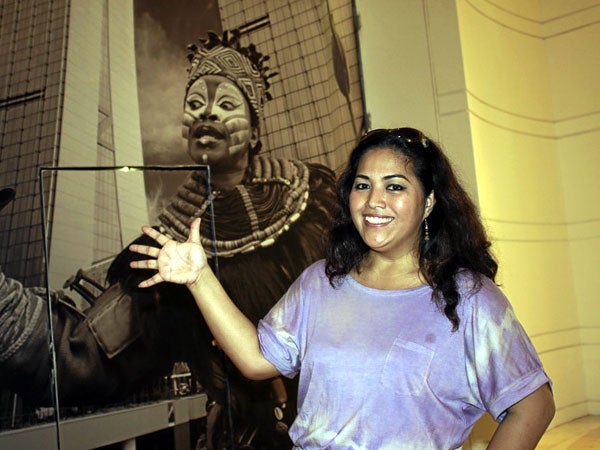 The performer and her role

A Filipina’s Circle of Life

SINGAPORE – Inspired by a deck of cards, Marina Bay Sands’ architecture leaves many tourists and locals mesmerized by the resort’s shimmering presence at sunset. But it was the stirring opening of the Marina Bay Sands’ resident show, “The Lion King” that left me in awe.

The Disney musical begins with Rafiki’s stirring call in Zulu to the animals at Pride Rock. As the sun rises onstage, two giraffes and a cheetah walk in. The amazing puppetry wowed me. Like a wide-eyed child, I was speechless as a plethora of dancers dressed as zebras, elephants, birds, rhinoceros, and ostriches appear.

While the visual spectacle was truly grand, so was Rafiki’s big, bold, powerful voice belting out Elton John’s moving words in “The Circle of Life”:

“From the day we arrive on the planet

And blinking, step into the sun

There’s more to see than can ever be seen

More to do than can ever be done;

There’s far too much to take in here

More to find than can ever be found

But the sun rolling high

Through the sapphire sky

Keeps great and small on the endless round

It’s the Circle of Life

And it moves us all

Through despair and hope

Through faith and love

Till we find our place

On the path unwinding

The Circle of Life”

The drums, the beat, the costumes all magically transport me out of modern Singapore and into the wilds of Africa.  It is impossible to be unmoved by the performance of this song. Undoubtedly, this is the most important song of the musical. For me, it is a fitting theme song for my life as a travel writer, and sums up the journey of OFWs.

The message of the song couldn’t ring any clearer than to one Filipina cast member of this musical in Singapore. Yael Alano Pineda has performed “The Circle of Life” hundreds of times.  The 41-year-old singer, dancer and actress has been with  the Disney production since 2003, performing in Sydney, Melbourne, Shanghai, London and even in Hong Kong Disneyland’s Festival of “The Lion King.”  In the Singapore production, she is the female swing, and covers Rafiki and Shenzi.

We meet at the Marina Bay Sands Theater at 3 p.m., on a Friday. She greets me warmly. We quickly trace where each one is from, as we share the same last name.  Her father hails from Quezon, while my dad is from Tarlac. She leads me into the Green Room, and as we pass through the dressing room, we see the mask of Shenzi, one of the three hyenas that she plays.

Once settled in the Green Room, she pulls out the tattered box of a Scrabble board game. “I play this while waiting for my turn during the show,” Yael shares. It feels as if I am a relative who has come to visit and see her life here in Singapore.  She excitedly opens her world to me.

The musical’s international cast has 50 members, coming from ten different countries. Naturally, most of the cast members are from South Africa, with artists from the US, Canada, UK, Belgium, Italy, France, Brazil, Australia, New Zealand, Switzerland, Taiwan and the Philippines.  Yael is the only Filipino adult in the cast, along with five Filipino kids playing the roles of the young Simba and the young Nala. She plays mommy to these younger Filipino actors.

But Yael is also “Momma” to the entire “Lion King” Singapore cast.  As cast members walk by, they call out “Hi, Momma!” One actor sitting by the couch eating a sandwich chimes in, “Yes, she’s our Momma away from home. She cooks for us and makes us feel at home.”  Yael smiles, “I cook adobo, make wraps, or bake a cake, then bring it to work.”

Being a mom comes naturally; after all this actress is a single mother to three children: 18-year-old Cheaulina, 15-year-old Franz and 12-year-old Maui.  While working abroad on “The Lion King” has forced her to be physically apart from her kids, she treats the cast and crew as her second family.  She has a gift of making the stage feel like home; after all, it is the only home she knows. Her parents are both performers. Her father is a musician and her mother one of the first Bayanihan dancers.  Yael says her mother was one of the first Filipinos who performed on Broadway in 1958, with the famed Filipino dance company.

Yael, too, was with the Bayanihan Dance Company for ten years in 1984 to 1994. She has also performed with Repertory Philippines, Atlantis Production and Celeste Legaspi’s “Musicat.”

Like most Filipinos working abroad, Yael’s path to an international career had not been easy. She distinctly remembers how she got to join “The Lion King.” In 2002, she was rehearsing for one of Celeste’s musicals. Someone distributed flyers for the auditions of “The Lion King” Australian production. Yael recalls: “Seeing the flyer, my heart went ‘Ka-boom, Kaboom.’ I could feel it. I really wanted this musical.  But I almost didn’t audition because I had no money.”  This single mother could not even afford to buy the musical pieces for “The Lion King,” costing P800.  Luckily, one of her friends invited her to be an extra for one commercial that paid P1,000 for the part.

With her great talent in singing, dancing, and acting, she was accepted as Ensemble for the Australian production in 2003. She left the country with only P20 in her pocket. But this single mother was driven to follow her dreams and provide a better life for her children, then only 4, 7, and 10 years old.

As the opening song aptly reminds us, we move through despair and hope, through faith and love until we find our place in this circle of life. It captures the life journey of Yael.  From a struggling actress and single mother, she has embarked into the unknown, finding herself performing “The Lion King” in five cities abroad.  It has allowed her to provide a good education for her three children though the rigors of separation pain her still.

Yet she has remained strong through her journey. With her hearty laughter, beaming smile, and spunk, Yael says you can choose how you go through life’s journey, “I chose to enjoy this journey, so I’m smiling and happy.”

As she performs eight times a week, Tuesdays to Sundays, the musical remains fresh and relevant to Yael. The songs have struck such a deep chord that each time she performs they are her prayers.  “Every time Nala sings ‘Shadowlands,’ I always cry.  Nala sings:  “The ground has broken/So I must go/ Now I must go/ And where the journey may lead me/Let your prayers be my guide/I cannot stay here, my family/But I’ll remember my pride/And where the journey may lead you/Let this prayer be your guide.”

As part of the Ensemble, Yael accompanies Nala’s lamentation, by singing these words: “I have no choice/I will find my way/ I will return, I will return/Beso bo.”

The lyrics are exactly the pained sentiments of a mother leaving her home and her children to earn a living abroad and create better lives for them.  These very words have become her mantra and source of strength, and they have kept her strong all these years.

And she definitely needs that faith to keep going. Performing Rafiki is not easy.  It requires over half an hour of applying make-up, not to mention singing in English, Zulu and the Xhosa African dialects.

But she carries on proudly.  And why not?  She gets to praise God in the song “He Lives in Me.” She belts out, “Wait, there’s no mountain too great/ Hear the words and have faith/Have faith/He lives in you/He lives in me/He watches over/Everything we see.”  Every performance of this touching song is her personal prayer of praise to God.

For Yael, the journey of the past eight years has led her to a shining path. She left Manila with a one-year contract as Ensemble. Now, eight years later, she performs as the female swing and covers for Rafiki and Shenzi.  She chose to leave “The Lion King’s” West End production to be in this Singapore production to be closer to her children.

Last June, for the first time, her 18-year-old daughter saw her perform Rafiki. Tears flowed from her eyes as she watched her mom’s powerful opening number.  Yael’s two sons will similarly fly to Singapore soon to see her perform.

Like most Filipino overseas workers, Yael’s dream is simply to be reunited with her children.  Now engaged to her American boyfriend, she looks forward to taking her three children and be finally reunited as a family in the US.  After all her trials and difficulties, the pieces are finally falling into place.

Before I parted with Yael, we took some photos beside the “The Lion King” signs in Marina Bay Sands.  But a tall lady concierge stood close to the Rafiki banner.  As Yael hammed it up for the cameras, I said in Tagalog, “Kakainis naman si Auntie, naka-extra sa picture!”  As we were about to walk away from the banner, the auntie smiled at us. Yael smiled back and graciously thanked her for letting us take photos.

The auntie, it turned out, was Filipina. Thinking we were tourists, she tried to convince us that the show is great and that there are Filipino children performing.   When she watched the show, the concierge added, she made it a point to loudly tell the audience around her that the kids are Filipinos. In her modesty, Yael simply smiled back. I proudly informed the concierge that Yael is one of the stars of the show. She was surprised.

As we hugged each other goodbye, I mused that from one OFW to another, Yael’s rich life deeply reminded me to trust the process, with faith and hope we will find our place in this great Circle of Life. •

For more golden delicious moments in food and travel, follow the author on [email protected] theMaidastouch, read Maida’s blog, www.themaidastouch.blogspot.com or e-mail her at [email protected]  Maida Pineda is also the author of “Six Degrees of Expatriation: Uncovering Lives of Expats in Singapore” and “Do’s and Don’ts in the Philippines.”  Maida has a Master of Arts in Gastronomy from Le Cordon Bleu and the University of Adelaide.