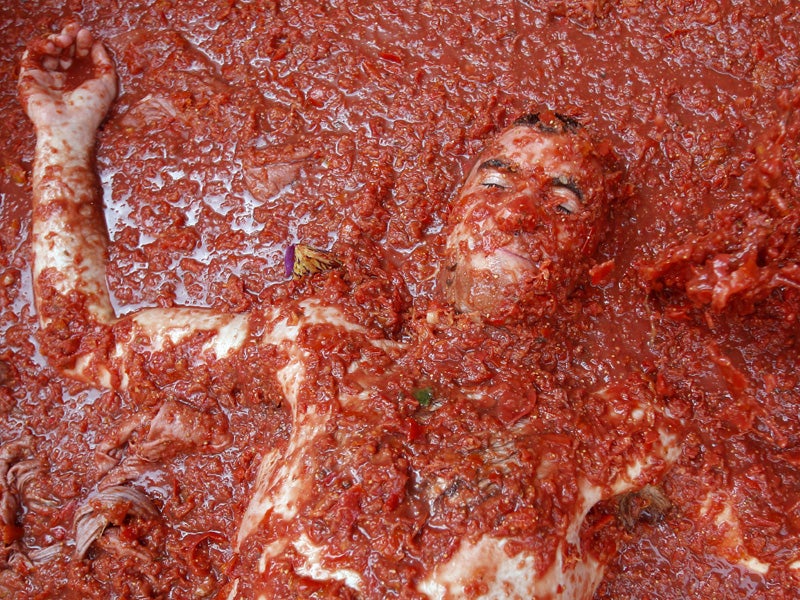 TOMATINA A reveler lays in tomato pulp during the annual "Tomatina" tomato fight fiesta in the village of Bunol, near Valencia, Spain on Wednesday. AP

BUNOL—Tens of thousands of revellers splattered each other with 120 tons of squashed tomatoes Wednesday in a gigantic annual food fight known in Spain as the Tomatina.

The streets ran red with slippery juice as nearly 40,000 people, many stripped to the waist and drunk with sangria, pelted each other in the Plaza Mayor square and nearby streets of Bunol, eastern Spain.

Five trucks unloaded the ammunition on participants from around the world, including tourists from the United States, Japan and Australia, before the battle commenced with a firework being set off.

Within minutes, the town of 10,000 inhabitants resembled a war zone awash in tomato sauce.

Keeran Fitzgerald, 26-year-old Australian, said: “It was the most amazing thing ever.”

Minami Matsimuta, a Japanese participant found the crowd a bit much.

“It was so crowded. People, like, kept pushing, kept throwing tomatoes,” she said.

Despite the wanton destruction of the red fruit, the festival turns a good profit for Bunol, said town hall spokesman Rafael Perez.

But the money spent by tourists in the town before and after the festivities more than makes up for it, he said.

The rules of battle are strict.

Revellers must crush the tomatoes before throwing them to lessen the impact, wear old clothes that can be thrown away, and put on old tennis shoes rather than sandals, “which can get lost in the juice,” organizers say.

They are also advised to wear swimming goggles, “because the acidity of the tomatoes stings the eyes.”

Some 200 police were on hand in case of incidents.

The “Tomatina” is held each year in Bunol, located in a fertile region some 40 kilometers (25 miles) north of Valencia, Spain’s third-largest city, on the last Wednesday in August.

The event is thought to have its roots in a food fight between childhood friends in the mid-1940s in the city.

In the 1950s the food fight was banned before being finally authorized by the town hall in 1957.

Since then it has grown in size as international press coverage brings more and more people to the festival.

For some participants, apparently, it is possible to have too much of a good thing.

“Tonight we are not going to eat tomatoes for diner, no more tomatoes,” said one British reveller, who gave his first name, Mark.

“I was more a giver than a receiver but if I was a receiver I would really enjoy it.”