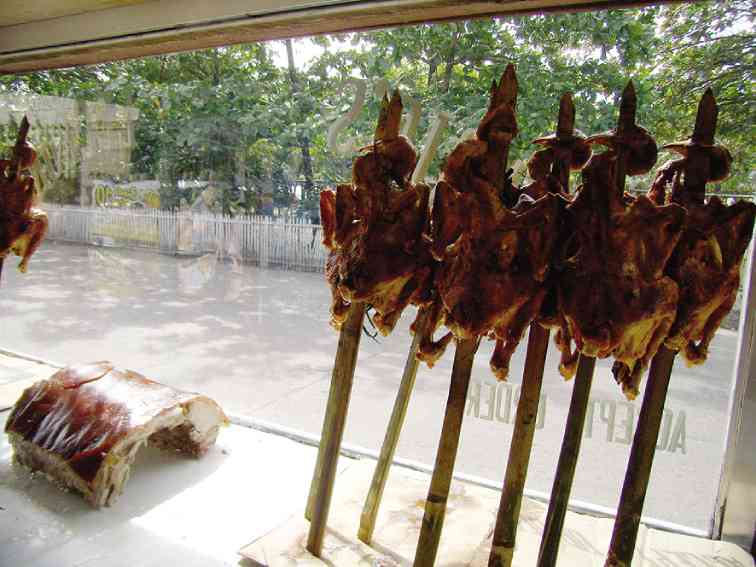 CHICKEN inasal and lechon at a stand

Our street food is thriving, despite Singapore snub

At the World Street Food Congress held on the first week of June, a friend griped that there wasn’t any Filipino street food mentioned, nor were there any on exhibit.

Of course, Singapore was there, being the host country with its most well-known blogger and TV host KF Seetoh as main organizer, and street food being a part of Singaporean culinary life.

Our near neighbor, Indonesia, was cited and other countries far from the Philippines as well.

Filipino food was mentioned though by Saveur editor in chief James Osland in a private interview with Inquirer Lifestyle’s Alya Honasan. He was familiar with turo-turo cooking from his Filipino friends in the Bay Area, and prefers what he calls “grandma cooking.”

My disappointed friend and I started to enumerate the street food we had seen and eaten all these years.

We started off with those outside of schools that the nuns warned us against. The green mango vendor came to mind, and the perfect way he pared those pieces so that the skin looked like flower petals, and the purple red bagoong alamang, both alarming and attractive, that he wiped on each mango cheek.

Ditto the ice cream cart and the trio of favorite flavors—mangga, ube, keso—the “dirty” ice cream as the nuns called the product that was expertly placed on cones or on pan de limon with what looked like a palette knife instead of a scoop.

Much later it was fishballs. We remember how Doreen G. Fernandez wrote about how colegiala described skewering the balls as “make tusok-tusok” and hearing them now in my head, saying it in their high-pitched nasal way à la Kris.

At the Quiapo market area, kitchen staff cooked pancit in huge vats that, once done, were displayed on nearby carts. Small chairs were provided to the customers.

We moved on to the provinces.

In Pagudpud, Ilocos Norte, the empanada vendor must have been glad that our bus conked out right where she was. We were equally glad it did, because we watched an empanada demo right there, including the eating. Her cart was to be pulled away later by the tricycle that also held all the ingredients.

She had balut as well for the drinkers in the area.

Vigan in Ilocos Sur was where I had my first taste of empanada, as I waited impatiently for the afternoon when the vendors would come in and occupy the plaza.

My favorite, though, was on a little street near my hotel, a lone vendor who made what is still, for me, the best empanada.

Alas, today, the plaza is no longer the venue for those afternoon delights which are already in permanent structures elsewhere, where turnovers are available all day and all night.

Behind Nepo Mart in Angeles, stalls selling everything fried, attracting mostly students who want to stretch their allowance.

Chicken spare parts like chicharon of intestines and pork chicharon were the most popular fare. We older ones were thrilled to challenge our health with the cholesterol build-up.

That was how I remembered one street food in Lipa, Batangas. The sign said “proven”, but the image looked something like fried chicken skin.

The vendors said “proven” was a part of the intestine. It was only recently that I looked it up. The online dictionary said the chicken part is proventiculus, “the division of the stomach in birds that secretes digestive enzymes and passes food from the crop to the gizzard.”

Apparently that part is thrown away when the chicken is dressed in the processing plant. It has assumed the name “proben” in some areas because we have the propensity to get our “b’s” and “v’s” mixed up. (At our airport, a digital sign read, “Von Boyage.”)

In Santa Cruz, Marinduque, everything barbecued or fried was available at night near the plaza. One of the carts was a marvel—an all-stainless steel, modified tricycle with a glass-enclosed display area and a kerosene lamp to keep the products warm and well-lighted.

In Tacloban, Leyte, we couldn’t wait for evening when the carts of sinugba (grilled) pork and chicken filled the air with swirling smoke and barbecue aroma. One restaurant we ate in didn’t mind that we bought supplemental dish from outside and even gave us dipping sauces to go with our meal.

The last time we looked for those carts, we were told to go near the pier where the vendors are now.

There is a move to get street vendors away from the streets and move them to specific areas. It has been done in Vigan and Leyte and in Cebu where the Larsian sugba stalls have also been relocated.

Safety and hygiene are the issues cited, and this move is commendable.

In Singapore, they did the same thing but built big gymnasium-like structures with light and water facilities as well.

In Batac, the empanada vendors are housed in one area. Should it still be called street food then, when it is as organized as that?

That question can well be answered in the next World Street Food Congress.

Filipino street food should be represented next time. We have so much variety; we even have quaint names for some of the food (adidas, kwek kwek, betamax). These should be talked about, written about and exhibited.