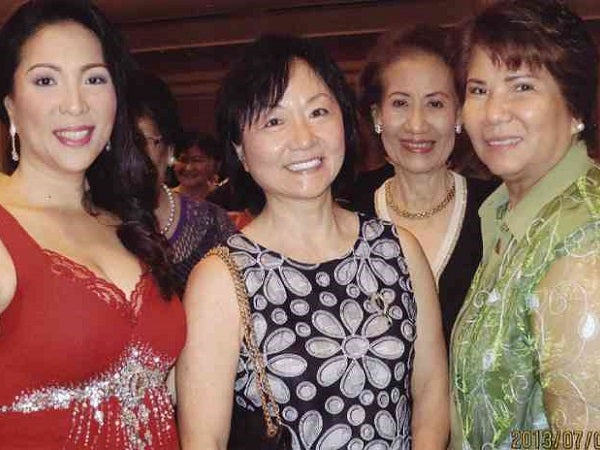 Ingrid Sala Santamaria and Reynaldo Reyes launched their 23rd Romantic Piano Concert Journey Tour in Cebu with a smashing performance at the lobby of the Marco Polo Plaza Hotel.

Two grand pianos were set on a raised platform around which sat an elegant crowd led by Cebu Vice Gov. Agnes Magpale and Norma Selma Gullas. Fuchsia roses on tall vases set on the floor and a pink aura achieved with special lighting added to the ambience.

The hotel’s resident manager, Julie Najar, welcomed all, stating that it was a distinct honor for the Marco Polo to present two of the country’s best pianists in a memorable concert.

Ingrid was born in Cebu. It is here that she learned to play the piano and excel in it. She was nurtured by her dedicated parents, Salvador and Pilar Sala, who was her first music teacher.

Reynaldo Reyes was one of Ingrid’s mentors when she was a young piano student. He lives in the United States but comes every time they have one of these tours. During the concert, he recalled that he and Ingrid must have performed more than 500 concerts all over the Philippines and abroad.

Listening to classical music is good for your brain, Reynaldo often tells his audiences. “Your neurons multiply in great number when you hear classical music. That’s one way to prevent Alzheimer’s disease,” he said with a radiant and convincing smile.

Thus said, the concert began. Ingrid took the part of soloist while Reynaldo provided the orchestral accompaniment on the second piano. First was Concerto No. 1 in E-flat Major by Franz Liszt.

After a brief interval, it was Concerto in B-flat minor by Peter Ilich Tschaikovsky, popular for its thematic material, warmth of feeling and brilliant climax. American pianist Van Cliburn became the winner in the first Tschaikovsky competition held in Russia after he played it there in 1958.

This could be the reason why it is Ingrid’s favorite concerto, since she had known Van Cliburn through former first lady Imelda Marcos.

But the actual reason is closer to Ingrid’s heart.  It was the graduation piece of her mother, Pilar, under Sr. Baptista Battig at St. Scholastica’s College in Manila during the 1930s. The Sala family’s piano school was named after Sr. Baptista.

“Wonderful!” exclaimed Paqui Aboitiz and Quina Melendez. “We like this arrangement so we can appreciate the music score better, without any overpowering from an orchestra.” Many in the audience shared the same opinion.

Pianists Tina Ebrada, Pilar Cusi and Celi Elliott were also on the front row, as well as

Two nights later, there was another musical event at the Marco Polo, this time at the grand ballroom. The Honorary Consul of Canada and Mrs. Robert Lee presented their daughter, Aileen Lee Li, soprano, and The Voice Choir in “An Evening of Inspiring Music.” It was for the benefit of The Living Christian Church (TLCC).

The program started with

Dr. Herbert Buot singing the invocation. Aileen sang solo pieces, a lot of numbers with The Voices and duos with Kelie Ko and Dave Clark Sibonga, who was the evening’s piano accompanist.

Most applauded were the selections from “Phantom of the Opera,” “West Side Story” and “Les Miserables.” The Voices, conducted by Darlene Yap, scored greatly with the Cebuano songs “Usahay” and “Laylay Agolaylay.” Kudos to them all:

Before the finale, Aileen addressed the audience to say it was a great privilege for her “to be here tonight and dedicate this song to my dear parents.” Shew and The Voices then sang “Amazing Grace.”

Consul Robert and Anna Lee capped the evening by presenting a sizeable check to TLCC. Aileen has since left Cebu for Toronto, Ontario, in Canada, where she lives with her husband, Dr. Derrick Li, and their children, Anika and Joshua.