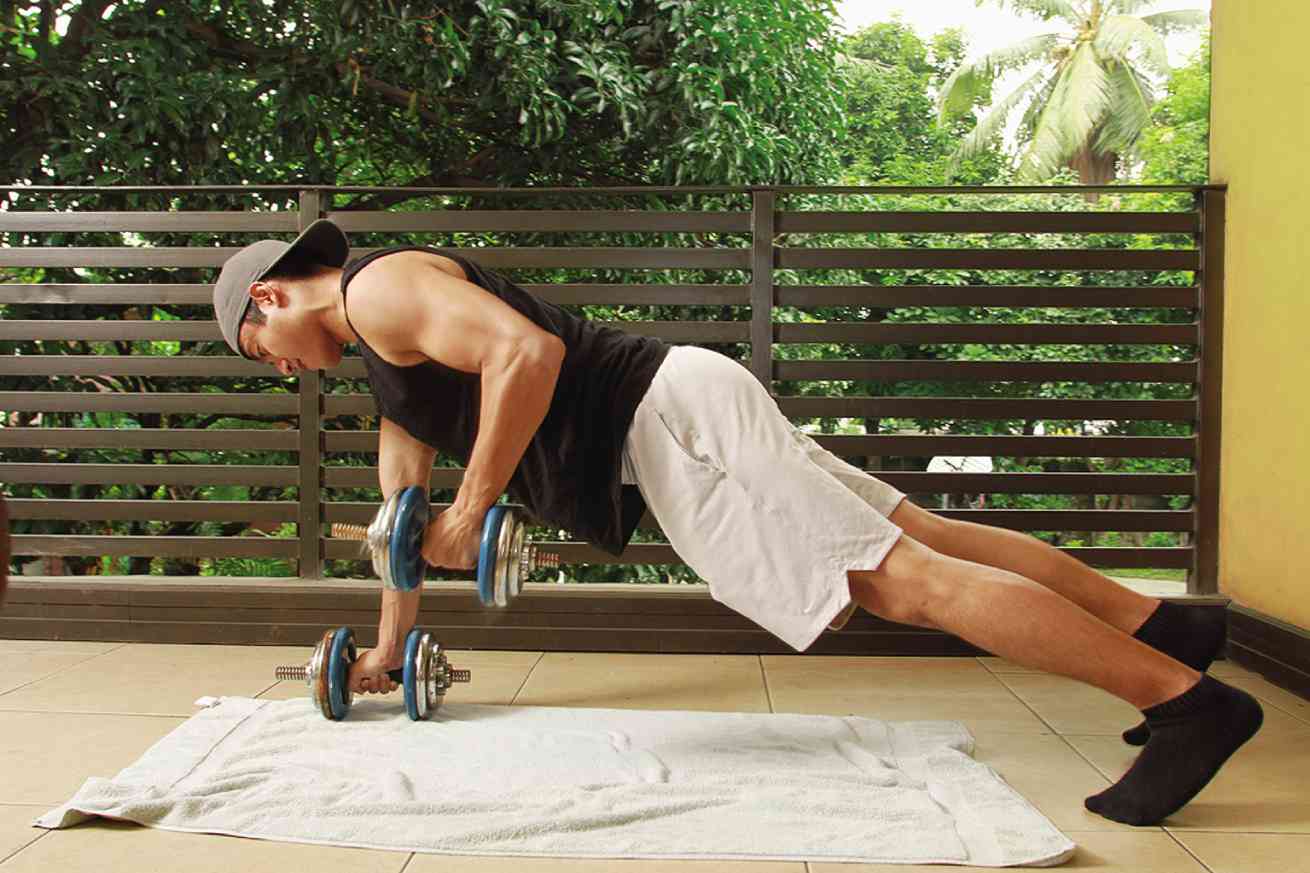 WITH the iPhone as his exercise companion, Mikael Daez uses the Gym Hero app to record his program. Doing the pushup and row exercise. PHOTOSBYNELSONMATAWARAN

Mikael Daez turns to apps to level up

Mikael Daez has a problem most people would like to have. His body type is not predisposed to fat. However, being skinny in front of the camera can be a disadvantage.

“As an actor, I’ve got to be versatile. I have to fill up my shirts. If I dress up and look so thin, I won’t be able to pull off the look,” says the 25-year-old model-turned-TV host and actor. “I was able to bulk up, but I got skinny when I didn’t exercise. I lost fat and muscle, so I looked like a high school boy again,” says Daez.

Building muscle requires regular weight-resistance workouts, cross training, nutritional supplements and a high-calorie diet. But with Daez’s daily schedule, he finds it challenging to strike a balance. He gets up at 4 a.m. to be at GMA 7 for his hosting duties on “Unang Hirit.” When the program finishes at 8 a.m., he goes to the taping of the romantic comedy “With a Smile.” The taping usually ends at 10:30 p.m.

Then the cycle is repeated. It gets more hectic when he goes out of town for his “Midnight Snack” segment in “Saksi.”

A techie, Daez uses apps to help get him in shape when he can’t find the time to meet up with his personal trainer Joel Abalde or enroll in a yoga studio. With his iPhone as his exercise companion, he has discovered high-performance fitness apps. Aside from providing mobility and flexibility in schedule, apps are cost-effective.

Many are free for basic levels or offer free trials. Progressive fitness apps cost a mere fraction of gym or studio fees. The popular workouts are available for both iOS and Android platforms.

For building muscle, Daez uses Gym Hero, which serves as an exercise journal. It helps create routines and provides a summary for every completed workout, which includes the total weight, numbers of repetitions and sets and workouts over a certain time for each muscle group. It gives a complete picture of what was accomplished in one session and shows the user’s progress at a glance.

“Gym Hero is my best log book for the gym. I input what I do. It’s easy because you click which exercise you did instead of writing them all down,” he says. With this digital journal, he can keep a record of his progress and share it on his blog.

Gym Hero can be synchronized with a cardio app, RunKeeper. The phone’s GPS can follow the route, speed, distance, time, and even calories for each loop. Daez merely taps “start activity” to get running. It can also be adapted to include music from the phone’s playlist or to make a running program.

“I’m a super geek. RunKeeper records my every activity. It gives you a chart and sends an alert if you haven’t run for days,” he says.

To improve his flexibility, Daez started using Yogify. He rolls out a towel in his bedroom and enjoys the stretches while the video shows a teacher delivering the instructions in a soothing voice.

The yoga classes are set according to fitness objectives—strength, balance or flexibility—and skill levels. Each set of exercises has specific poses to target certain muscles. Daez enjoys this app because it enables him to focus on what he wants to achieve at his level.

“I’ve only been using it for a couple of weeks. I’m staying with flexibility. There are poses for the hamstring, groin, back and hips. I chose the hamstring,” he says.

He points out that fitness apps enable the individual to maximize his time and resources. “If you don’t have the money, these apps can give you a chance to work out. You need to put in a different kind of effort. Instead of the effort of going to the gym or studio, you need to make time. When you appreciate the benefits, then you’ll be able to continue the program. Imagine how life would be without it. If you didn’t have this app, there’s no way you would do yoga or exercise unless you go to the studio.”

Yet in spite of all the digital aids, Daez always reverts to his first love, basketball. He was a varsity player at Ateneo from grade school to college. The sport has taught him a lesson in humility. In high school, he looked up to Allen Iverson, then the shooting guard of the Philadelphia 76ers. Iverson was a natural talent who set high scores despite slacking in practice.

Daez picked up that attitude. “Iverson preached: ‘No practice.’ We didn’t take basketball seriously in high school. When we got to college, the players were faster and stronger. If you didn’t prepare for the sport in high school, you’d have a hard time catching up in college. I didn’t give myself the best chance to be where I could be in basketball.”

He cites today’s icons, Kobe Bryant and LeBron James, as the opposite of Iverson. “They preach psychotic obsession in trying to get better. Even if you’re No. 1, you still have to find a way to up the ante. I see the kids following their example.”

Aside from exercise, Daez pays attention to his diet and supplements.  His breakfast consists of brown rice and tuna and cheese omelet. Daez says he advocates brown rice not only because of its nutritional value, but also due to economics.

“It is said to be the key to our self-sufficiency,” says Daez, who was invited to join Oxfam, an international organization that aims to seek alternative solutions to poverty. As brown rice is more filling, a study has shown that if Filipinos eat more of this instead of white rice, they would eat less, thereby considerably reducing consumption.  Subsequently, there would be no need to import white rice. He complements the rice with chicken and steak, and snacks on fruit.

Supplements helped him gain 15 lbs in one year. “It may not be much, but I’m proud because it’s really hard for me to gain,” says Daez. He mixes his shake with high-protein weight gain powder—50 g of protein and 250 g of carbohydrate.

“That is a one-and-a-half big meal. One serving is 1,250 calories. This helped me out,” he says. He keeps his shake in a 1.5-liter thermos and drinks it slowly throughout the day.

The efforts paid off. From 160 lbs, his weight went up 178 lbs. As a sign of his triumph, he even became a Cosmo magazine centerfold.