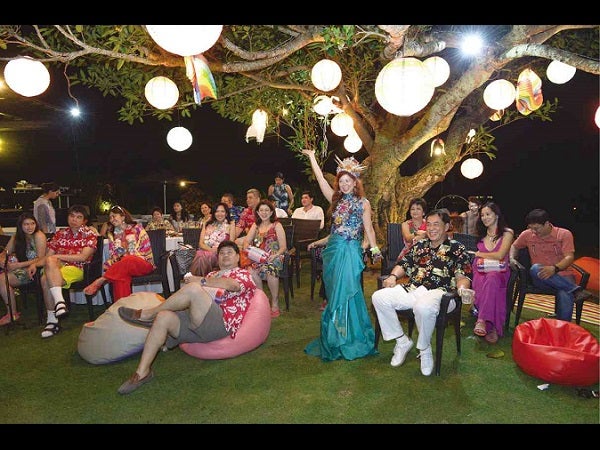 Celebrating my golden year in Balesin

Around the time when “Charlie’s Angels” was still a TV series and not yet a movie, there was another popular sitcom called “Golden Girls.”

It was a funny show about women in their 50s living in Florida. When I used to watch it, I thought the “Golden Girls” looked really old and ancient!

Fast forward to 2013: Chronologically speaking, I’m a “Golden Girl” and no longer an “Angel.” That said, it ain’t too bad being 50. There’s all this talk about 50 being the new 30, which only means that we make our own destiny and live the life we choose.

I decided to celebrate my golden milestone on the beautiful island of Balesin. Preparations started in July with a “rehearsal” party conveniently using my hubby Dennis’ birthday. After that and months of planning, adding more fun activities, more charities and more dancing, my weekend was all set.

Getting to and from a destination party is no longer a logistical challenge in Balesin. The resort has a 94-seater BAe 146-200, just a shade smaller than the aircraft flown by PAL and Cebu Pacific to Boracay. Even better, for large groups like mine, Alphaland chartered the big jet from Skyjet.

Wonderful friend Willie Revillame also lent his super fast Wil plane to fly the first batch of partygoers to the paradise that is Balesin. Willie followed the next day with his band and showgirls, all to beef up the entertainment in the main party at the Balesin Sala.

The two-day celebration started with a sunset cocktail party at the Nusa Dua Bar at Bali Village. To complement the beautiful sunset, there was music from the New Sub-Project Band and DJ Abby Barata spinning ’80s tunes.

At the party, Freeway bags with personalized artwork portraits were given by Freeway sisters Sheree Gotuaco and Katty Qua. Goody brushes and Watsons products were given away as raffle prizes, too.

Saturday was filled with activities, starting with yoga at the Balesin Spa, with Aisa Locsin of Yoga Plus leading a relaxing class by the beach. Breakfast followed in the Balesin Clubhouse as we welcomed the rest of the guests who were just flying in that morning.

Afterwards, we all headed for lunch at the Thanassis Greek Restaurant in Mykonos Village, where we were joined by my Rufino and Prieto relatives. Dennis and my kids also finally arrived on the last plane to the island.

The action-packed Fila Amazing Race was held in the afternoon and was totally thrilling. Each color-coded team had one of the Philippine Volcano hunks and five other teammates.

The teams accomplished the race while discovering the island’s treasures. Included were a kayak race to the Balesin Spa, a team wrap-around the resort’s giant balete tree, archery, rock climbing and even some water balloon fun in St. Tropez Village.

The real Fila Team winner was the Green Team with Volcano Jakey Letts leading the rest of his triathlete teammates to the finish. Winners were awarded prizes including Timex watches and Belo sunscreen.

Videographers Klay Tan and Emir Bautista made an amazing, on-site video of the Fila Amazing Race for all the guests to view.

The main celebration was held at the Balesin Sala, which was all decked out with colored beanbags and flags. Event organizer Popsie Gamboa made sure everything was properly decorated with “Fifty Shades of Tessa” touches on almost everything.

Adworks Graphics couple Norman and Mye Cruz were also in the party. Their creativity was everywhere—from the cool invitations with specially made Dunkin Donuts inside and the welcome tags to key card holders and even tags for the Gatorade giveaway bags.

Opening the night’s entertainment was Astroboy of Talentadong Pinoy.

Daniel Darwin, a hula-hoop champion, regaled the guests with his flaming hoops. He was a hard act to follow but I did my best with a ukelele duet with my osteopath, Dr. JP Prado.

After that, it was time for the MTV Awards, so named for Ma. Theresa Valdes. Several groups of friends produced MTV-style videos, and the best won Swatch watches, Travel Club goodies, Watsons products and G-Star jeans.

The seven entries included Rajo Laurel and Malu Gamboa, who reprised their team from last year, this time with an OPM number. My personal fave was the Swatch entry, “Where In the World Is Tessa?” directed by Rowell Santiago. Fila contributed to the mix as well, as did my Cebu buddies.

The winning video was a cinema verite entry produced by my running friends. My Assumption classmates produced a “Hawaii 5-0” video, good enough for second prize; third prize went to Anton San Diego and Arnold Vegafria, who dug into my baby albums to produce a lifeline video.

Willie and his band got everyone dancing as he played the drums tirelessly, just resting to let DJ Abby keep the dancers moving.

Resident island guy Julian Ongpin must have been suitably impressed as the stragglers were still rocking at 4 a.m.

By that hour, the night owls on the island had all joined the party. And why not, since Johnnie Walker Black was flowing, and for the teetotalers, there was Magnum Ice Cream, specially flown in for the party!

One of the best parts of partying in Balesin is the ease of the planning. Alphaland marketing head Joanna Duarte has a team of “Angels” to assist in all the details, whether it’s for a full-blown wedding or a more business-like conference or, as in my case, a “Fifty Shades of Tessa” all-night session.