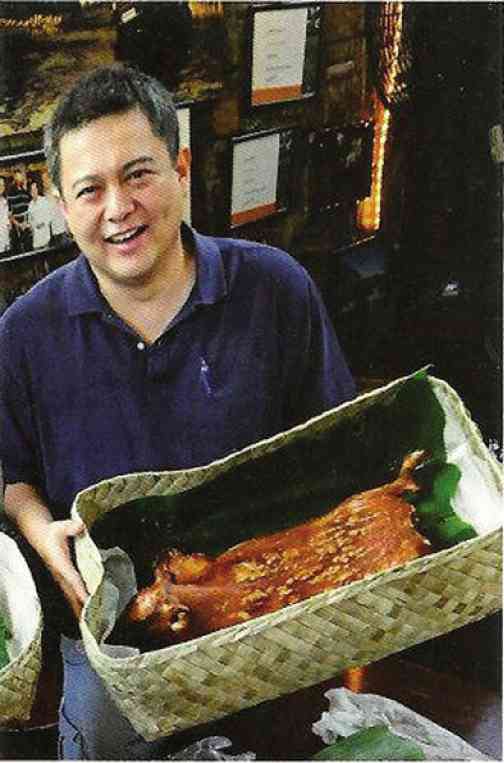 TINEE de Guzman with his cochinillo

When the cochinillo (suckling pig) arrived at a recent party of friends, comments and jokes about the pork barrel issue ensued.

Poor pig, whose name has been dragged through the mud by the blatant misuse of public money by many of our representatives in government.

Still, no one wanted to miss tasting the beautiful piece of pork lying spread-eagled, its crisp skin so inviting. Such a small pig (between three and five kilos) actually feeds more people than you think—up to 10 for the regular size. I was told, though, that without the other dishes, sides and main, two hungry people can demolish one pig.

Of course, the next question was, who cooked this?

The cochinillo was ordered from Pimbrera de Barasoain (tel. 8442049, Nelda or Dante), a company owned by Conrad Calalang and his family.

Calalang had several successful restaurants in the 1990s, such as Seasons and Restoran Barasoain.

He has retired, but the family food business has been continued by his daughter, Vanna Calalang Severino.

Pimbrera at the San Antonio Plaza on McKinley Road, Makati City, also has Filipino food-to-go, a boon for “empty nest” homes in Forbes Park and Dasmariñas Village. That way, the senior residents don’t have to cook just for two (tel. 7754128).

Pimbrera has been serving  cochinillo for over 10 years now, said Calalang. Sourcing, though, is becoming a problem, and prices may have to keep increasing.

The best in Spain

Since he retired, Calalang has been traveling, attending cooking schools and eating in the best restaurants. He has sampled enough of the cochinillo in Spain to be able to rate the first three, he said. Madrid’s El Botin is third; Segovia’s Meson de Candido is second; and the best, he said, is Avila’s Asador de las Cubas in Arevalo.

I visited two of them. The head asador (master griller) at El Botin is Michael Alim, a Filipino.

In Segovia, Señor Alberto Candido was asked to do a take two because the photographer didn’t catch him throwing the plate after he cut the cochinillo with it. In Avila, I was more interested in the pastries produced there, and the chuleton, those huge steaks.

Another cochinillo deserved applause in a Christmas party of a magazine. While there were other excellent fare—a huge paella, deep-dish fabada, roast turkey with stuffing all cooked by the editor—the party automatically perked up when the cochinillo arrived.

Plate in hand, I did my take on Señor Candido, but without breaking the plate afterward.

The cochinillo was done by Tinee de Guzman in his brick oven. De Guzman is an entrepreneur and photographer who loves to eat, and enjoys experimenting with cooking such as “pizzas, roasted lamb, beef, 10-hour brined pork” in the brick oven that cooks his cochinillo over charcoal. This has led to this business, Cochinillo del Cielo (tel.  0999-8810810; 6330043). That’s a hint that his product should taste heavenly. The container is made of woven leaves shaped like a tampipi (native bag for clothes), and the pig is kept hot with a banana leaf blanket.

De Guzman has experimented with other versions of the suckling pig as done by different countries. And so he offers the Indonesian babi guling, prepared with many spices like turmeric, lemon grass, black pepper, garlic and coriander seeds. And he can do the Louisiana cochon de lait, which is flavored with garlic, white wine and the place’s famous hot sauce.

Of course, he also has the Filipino lechon de leche, the pig not splayed like the cochinillo but looking like a miniature, regular-sized lechon.

The lechon de leche was what we had when Asian Wall Street Journal and Saveur writer Robyn Eckhardt came to research on the roasted pig. The lechon was cooked excellently at Kamayan on Pasay Road, Makati, one of the few then that offered the dish on its menu.

At an indulgent dinner held at Dedet de la Fuente’s Pepita’s Kitchen, we “pigged out,” so to speak, because of the four kinds of lechon de leche offered, each one different because of the stuffing. There were also many other dishes before and in between the lechon that made my head, not to mention my stomach, spin.

So that evening two years ago, Pepita’s Kitchen served us a sisig stuffing for the Pinoy lechon; nut-rich rice stuffing for the Christmas lechon; potato with herb stuffing for the German lechon; and truffle oil-infused rice for the French lechon. Since then, I’ve been told, new stuffings are being offered (tel. 4254605).

But recently, Antonis Kouroutsavouris, a Greek chef, deboned a suckling pig, stuffed it with apples, tied it up to maintain its rounded self, cooked it slowly in the oven and cut each piece himself for guests. We had it at Aleth Ocampo’s home, where Margaux Salcedo invited a motley group for a dinner with fabulous wines. Ocampo’s place at Magallanes is open for private dining (tel.  8510204).

We may just hear of other small lechon versions after this—a better prospect than digesting all that pork barrel brouhaha.