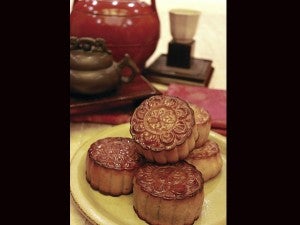 It is known more popularly as the Mooncake Festival.

“Apart from Chinese New Year, this is the time when the household dines in together, and eats a special meal,” Ms. Candelaria said.

Candelaria and executive chef Sun Bing have prepared a Mid-Autumn Festival Set Menu available until September 14 at the Mabuhay Palace, the Chinese restaurant of Manila Hotel specializing in Cantonese cuisine.

She said Cantonese cuisine is less spicy and more refined, and all the entrees in the Mid-Autumn menu have significance.

A light but filling dish, perfect for tofu lovers, is the Braised House Special Bean Curd Topped with Baby Abalone and Shimeji Mushrooms. This is believed to promote sound family relationships. The bean curd is smooth and soft, while the abalone (a kind of mollusk) provides a tender bite. Sidings of mushroom lend an earthy taste, while a broccoli floret offsets the saltiness. 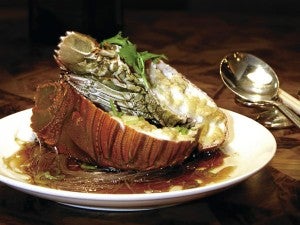 Candelaria said lobster is a festive food, something eaten only during celebrations. The lobster is served on its shell, on a bed of oriental sauce with some egg noodles.

The crunchy fried garoupa is good for four to five people. This may be paired with the Braised Bailing Mushroom and Fish Maw in Seasonal Vegetables or the Fortune-Wrapped Fragrant rice, which  is traditionally eaten to secure family ties.

Included in the set menu is a dessert of Yam Bits with Jackfruit and Baby Pearls in Coconut Milk served in martini glasses.

It took chef Candelaria two weeks to come up with the dishes. Her inspiration: sad songs.

“When I am happy I’m too happy to work, so to take some time off and concentrate, I listen to ’80s heartbreak songs.” 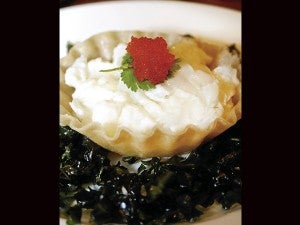 Mooncakes in varieties such as Mango and Cheese with Yolk, Pandan with Dark Chocolate Malibu-filled Praline, Jasmine Tea with Dark Chocolate Hazelnut Praline, Premium White Lotus with Melon Seeds and Yolk, and assorted nuts with candied cranberries are also available at the Mabuhay Palace.

The Mid-Autumn set menu, which includes a round of Pua Tiong Chiu complimentary dice game starts at P2,500 per person. A special Pua Tiong Chiu Light menu with dice game is at P800 per person. Call 5279469. Mabuhay Palace is open for lunch at 11 a.m.-3 p.m. and dinner at 6-10 p.m. Manila Hotel is at One Rizal Park, Manila.