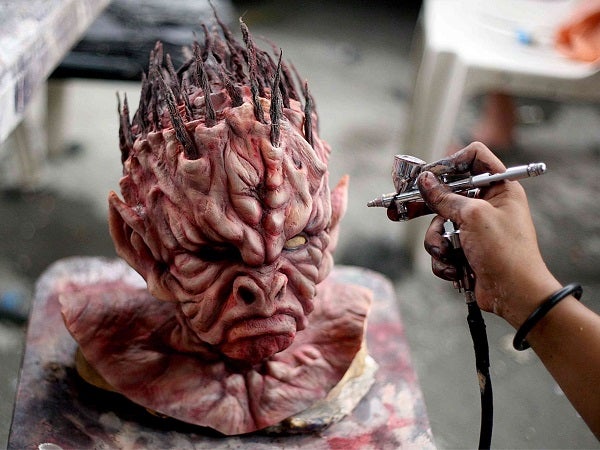 They Make Monsters, Don’t They?

Tell people you’re looking for the artists of “Juan dela Cruz,” and they’d point you to an old mortgaged space in Brgy.  Tatalon, Quezon City, with a prominent sight no curious visitor could miss: a humongous horse figure on top of the roof.

On the front yard, a ragged group of men expertly wield paintbrushes and assorted tools as they mold and sculpt creatures as colorful, archaic and complicated as their tattoos.

It’s Philippine underworld mythology come to life, as elves, tiyanak, kapre, tikbalang and other ghoulish monsters crowd each other out.  In a week or so, these grotesque beings would appear on “Juan dela Cruz,” a regular show on ABS-CBN, starred by Coco Martin.

That horse on the roof had its own close-up not so long ago: as Vice Ganda’s alter ego in “Petrang Kabayo,” a previous project of Oceanima Productions.

It is on Halloween—the glamorized version of our native Undas—when the scariest monsters creep out of these artists’  paint boxes to compete in rowdy parties and gatherings.

But for the prosthetics artists of Oceanima, every day is Halloween, and every horrific costume and mask a necessity—a source of daily subsistence.

Comprised of around 30 artists, the group is one of the few prosthetic companies in the country that work for television and films.

There are two companies that offer the service in ABS-CBN: Oceanima and MRP (Mountain Rock Productions). For its rival network, GMA, three groups compete for the job: Livecast Productions, Mercenario and one group of individual freelancers like Cecile Baun.

Baun, Benny Batoctoy and Ernie Carvajal are three of the pioneer prosthetics artists in the Philippines.

Making nightmares come alive is the foremost goal of these guys who have mastered FX Prosthesis, a behind-the-camera process that involves various stages: life-casting, application and the removal of make-up.

Their creations might make viewers quake, but prosthetic artists consider as nightmarish the cost of their tools.  Some of the materials used in crafting special effects masks and make-up are vulcanized latex, crepe hair that costs around P10,000, foam latex and scalp gel, and a kind of glue that sells for P13,500.

Creating a single prosthetics mask costs around P80,000. For each screen appearance, the production pays an additional P15,000 to P20,000.  These cover only material costs for retouching, as the artists receive no overtime pay.

Another nightmare of the job is the tedious process involved, starting with the creative director sending a concept design to guide the artists in their work.

The artists start by making a mold of the actor’s specific body part and use this as their base for sculpting the cinematic effect needed. Also called life casting, the mold-making process involves such materials as prosthetic alginate or silicone rubber. After the initial mold, a harder mold made of plaster or fiberglass bandages is created for added support.

The negative mold is immediately filled with gypsum cement to create a positive mold, and sculpted in clay on top of the positive. After the sculpting, a second mold is made. The prosthetics material, usually a foam latex, is cast into the mold cavity.  Now those are just the initial steps to creating a prosthetics mask.

No wonder that for Oceanima’s recent project, it took the artists from 12 noon to 7 in the evening to create 30 masks and costumes for ordinary bit actors to transform themselves into elves, tiyanak and kapre. The prosthetics masks are glued on their faces, and the effect completed by body painting and costumes.

Talent Romel Lagitan, 17, said it was his first time to be put prosthetics on: “Nakaka-kaba (It’s scary),” he said. “The mask will be glued on our faces.”

Zap, another talent who plays a kapre, that mythical cigar-chomping creature who lives on trees, admitted that his face felt itchy and heavy because of the make-up.

“Some talents and actors would complain and ask if the make-up process could be sped up; they don’t understand the process is tedious,” said prosthetic artist Rogelsen del Rosario. “Sometimes, they will tell you, can we do this in 10 minutes?” he added. “But we can’t do anything. Ganun talaga (that’s just the way it is).”

On top of the obvious impatience of some actors, prosthetic make-up artist Richard Carvajal noted that there are those who are careless about their make-up, so artists had to do time-consuming retouches.

In a previous interview, Zsa Zsa Padilla, one of the lead villains in “Juan dela Cruz” said the biggest challenge in her role is not “what goes on in front of the camera, but the preparations for the shoot.”

Zsa Zsa plays Laura, a shape-shifter, who alternates between human form and that of a man-eating aswang (vampire).

“You have to be really patient,” she said. “Our special make-up takes up to two hours to apply.”

There were times, she recalled, when the cast was in full make-up but unexpectedly, the shoot would be packed up because of non-stop rain or the lack of available time. This happened thrice, she added.

As for the prosthetics artist, patience pays off as well. They should be extra careful not to damage the face of their subject, Del Rosario said. “Prosthetics take and need time,” he explained.

And he means it literally, since their work does not end after the make-up session.  Like the extras and talents who wait for their next scene, prosthetics artists also have to wait out the shoot to ensure that there are no discolorations or unintended damage to the masks.

Jaime del Rosario, Rogelsen’s brother and colleague, said prosthetics make-up retains its integrity for up to five hours, and retouching is expected for long shoots.

Although the job entails horribly long hours and eye-popping work, Joel Cuenca, 36, head of the Oceanima Productions, considers everything a dream come true.

Indeed he has come a long way to become proprietor of the “Juan dela Cruz” venture in 2012, the company behind the prosthetics in such teleserye as “Luna Blanca,” “Wish Ko Lang,” “Munting Heredera” and “My Beloved.”

He used to be a fisherman from Mindanao, thus the name Oceanima Productions, Cuenca said.

From Dipolog in Zamboanga del Norte, Cuenca sought his fortune in Manila  and took up a short course in Practical Electricity at the Samson Science and Technology school.

From 1994 to 1997, he worked as janitor at the MRP prosthetics shop, keeping the building clean, bathing the dogs and washing the company vehicles.

He would observe the prosthetics artists at their job, and at night, would try out what he saw using the modelling clay that he had bought with his own money.

It wasn’t easy learning on his own.  He was often told off: “Janitor ka lang, focus on your work.” Fortunately, his boss decided to give him a break.  He made himself worthy of that trust and worked hard, all the while observing the other artists and telling himself that someday, he’d learn enough to be on his own.

Cuenca now manages a prosthetics shop that employs artists he used to work with, using as start-up capital the P200,000  he had saved  and money he had earned from other small businesses.

Business has been good and soon enough, he managed to save enough to build a six-storey house in Quezon City, which serves as the workshop extension of his office.

“I never thought I’ll go this far,” Cuenca said. Everything comes from Him, he added, glancing at the grotto in his place.

“Everything paid off after only 16 years. And I am grateful,” he said.

Beside the grotto is a spot where the fiberglass creations are made.  To form a monster’s body, the fiberglass is glued on the mold. Thanks to the open air location and elevation of the place, the hazardous fumes from the chemicals used in fiberglass prosthetics get dissipated, said prosthetics expert Armando Borgueta.

Doing prosthetics is a family business for the Carvajals, with Richard being the fourth among the brood to continue the trade started by their grandfather, the pioneer Ernie Carvajal.

He’d like to continue the older man’s legacy, Carvajal said, adding that aside from Oceanima projects, he also does freelance work with Creature Shop Prosthetics Make-up, a prosthetics shop he conceptualized and started.

“Prosthetics has been my life, my source of living, my culture, my personal expression,” he added. “[I] can’t think of doing other things apart from this.”

Creative freedom is something he aspires for, Carvajal said.  It’s not yet a given in Philippine prosthetics, he admitted, compared to Hollywood  standards but we’re getting there.

In Hollywood, it can take months to create prosthetics, he said. But given our limited budget and the pacing of telenovelas, a week is all it takes to make monsters here, Carvajal said.  “Despite that, creativity allows Filipinos to innovate and maximize available materials.”

For Jaime del Rosario, 35, working as a prosthetics artist might yet be the best way to make a name for himself.

“I’ve once dreamt of becoming a national artist,” he said.  At the Juan Sumulong High School in Rizal, he won an on-the-spot poster making contest. “I wanted to take Fine Arts, but financial constraints got in the way,” he said.

The mechanical technician undergraduate of Polytechnic University is part of the team that creates seasonal decorations for the Santa Lucia Mall where he earns minimum wage.

His work as a prosthetics artist, on the other hand, gives him maximum satisfaction.  “Although we’re more of craftsmen than artists, I enjoy my work,” he said.  “The drawing process is like a baby; it grows, and you have the capacity to improve it.” When he creates a piece, he would always see it in its entirety, not just the face but the other parts as well, he added.

So far, his most rewarding experience had been working on “Si Agimat at Si Enteng Kabisote,” which won best make-up in the 2010 Metro Manila Film Featival. “We were part of the team; the recognition made me proud.”

His job is a lot of fun, but it’s also serious business, he said. “You will be exposed to chemicals and there are a lot of sleepless nights, though we’re used to that.  What’s important is that we have an avenue for expression.”

These prosthetics artists have the power to make fantasy a reality with a little sculpting and coloring, and a lot of imagination.  In their world, everything is possible. •