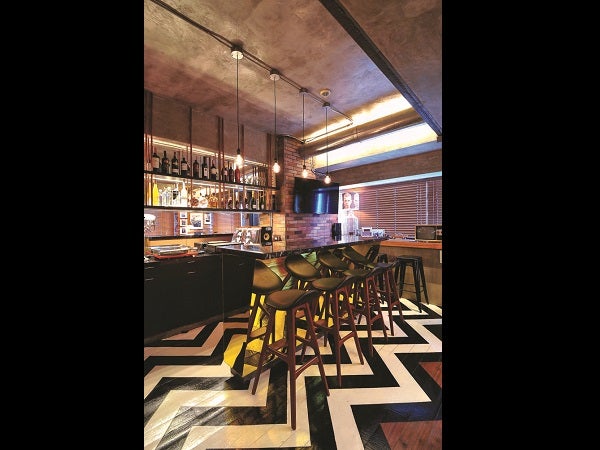 LONDON FEEL Interior designer Wilmer Lopez tries to capture the owner’s directives to turn his one-bedroom condo unit into a cozy bar typical of London and New York. He achieved this by, among other things, knocking down the wall separating the bedroom from the living room, and opting for red bricks, semi-exposed installations and gray, concrete finishing on walls. To jazz up the wooden floor, he had it painted with a bold black-and-white chevron pattern. Photo by Bobot Meru

A condo has lounge-bar feel

WHEN this marketing executive from a leading fast-food chain acquired a condo unit, he gave very clear directives to furniture and interior designer Wilmer Lopez. He wanted the 48-sq m one bedroom to look and to feel like a lounge/bar—eclectic, retro, typical of those in big cities like London and New York.

“Since home is an older condo unit in Eastwood, I consider this as a place where my friends and I could chill on weekends,” says the executive. “I seldom sleep here except when I have early meetings and presentations in Makati.”

The owner hosts after-dinner parties at least once a month, although when the condo unit was turned over to him in time for his birthday last October, he hosted weekly parties that month.

“Since I don’t cook, my parties are more like drinking parties with plenty of pica-pica and good conversation,” he says.

He and Lopez agreed to knock down the wall separating the living room from the bedroom. Thus, the 48-sq m unit looks bigger than it actually is.  Instead of a bedroom, Lopez built a bar with a black marble-top counter.

The move gave Lopez a free hand to produce a look revolving around a “mid-century industrial” design theme. The industrial element is in the form of exposed tubes and casings and concrete-gray walls that had been stripped off of its original blue paint and given the “distressed effect.”

Tiles that came with the unit also had to go, they were replaced with traditional tongue and groove wooden floor. To avoid monotony, Lopez had part of the floor, where the bar now stands, hand-painted in alternating black-and-white chevron pattern.

“The idea revolved around not making the unit look bright and brand new,” says Lopez. “We wanted to give it a New York apartment appeal.”

Apart from the distressed walls, which had been painted in concrete gray so as not to make them porous, Lopez used bricks as accents on posts, creating a brownstone, homey and retro effect.

The mid-century feel extends to both furniture and lighting. Because of the indirect lighting in the form of strategically placed pin lights and dangling “Edison” bulbs with exposed filaments, the place feels friendly and inviting.

“The bulbs are just reproductions. Unlike bulbs in the old days, they’re long-lasting and energy-efficient,” Lopez says.

Touches of red and orange in tufted leather sofa-bed, refrigerator, lighting fixtures, and even a vintage-looking red trash can can serve as perfect foil to the dominance of neutral gray, brown, and the black and white.

At Lopez’s suggestion, the owner invested in a high-end refrigerator, which, with its rounded corners, adds to the interior’s ‘50s feel. The owner originally wanted an orange unit, but in the end had to settle for red.

“Since we wanted to finish everything before my birthday, we had no time to wait for an orange refrigerator,” says the owner. “It would have been perfect. But getting a red wasn’t too bad.”

A black–and-white RCA TV dating back to the ‘50s and two rotary-type telephones bolster the unit’s timeless appeal. Of the three vintage gadgets, only one of the phones works.

Other focal points are a “bespoke” puzzle made of corrugated white cardboard that forms the head of a moose. Lopez designed the puzzle, which, like a preserved moose head, now hangs on the living room wall.

A few feet away from the moose head is an ampersand or & sign. Done in a reflective gold finish, the hanging piece echoes the material used in one of the unit’s counters.

“One of my personal advocacies is to promote Filipino brands,” says the owner. “When I learned that most of the accessories Wilmer would be using were sourced and designed locally, I got all the more excited.”

The owner, an audiophile, also invested in a brand new red turntable so he could play his collection of recently released vinyl albums. A musician-friend convinced him to rediscover the “warmth and beauty” of hearing songs waxed in vinyl instead of CDs and iPods.

A huge flat screen TV and a shelf-full of his favorite drinks by the bar complete the owner’s arsenal to create the perfect downtime with friends and loved ones.

“We didn’t know each other before we worked on this unit,” says the owner, referring to Lopez. “I was leafing through a magazine when I came across his works.  I liked what I saw.”

When the owner was finally able to track Lopez down, he was surprised to find out that his showroom dubbed as Space Encounters (call [632] 782-4243) was just right next door to his office building.

“I used to see Wilmer’s place from the outside,” he says. “I never had time to stop by and look at the pieces more closely. All the while, I thought he was reselling pieces made from abroad.”

Not only is Lopez into interiors, he also designs and manufactures furniture pieces, including iconic stuff made of leather and wood like the ‘Papa Bear.’ His staff and factory are in Bulacan.

The owner bought two such pieces in black to go with his orange sofa bed. The ‘Papa Bear’ is part of Lopez’s Goldilocks series, which also includes the ‘Mama Bear’ and the ‘Baby Bear.’

“The ‘Papa Bear’ usually comes in black leather, but clients can choose any color they want,” says Lopez. “It’s the perfect size for his condominium.

“He either took care or thought of everything. The only item I brought into the mix is a model of a 1950s car.“

To keep the place from looking impersonal, Lopez incorporated enlarged black-and-white photos of the owner and his family. The framed photographs are mixed with framed scenes from Old Manila, New York, and London.

Lopez also did a series of shelves near the main door to accommodate the owner’s collection of action figures from the one of his favorite movies, Matrix.

“I like Matrix and the idea that Neo, the lead character, is the chosen one to save the world,” says the owner, a UP Business Administration graduate and former Benigno Aquino, Jr. scholar. “We’re all chosen to do good and make a difference in this world. In fact, it’s part of our destiny to do good, whether we like it or not.”