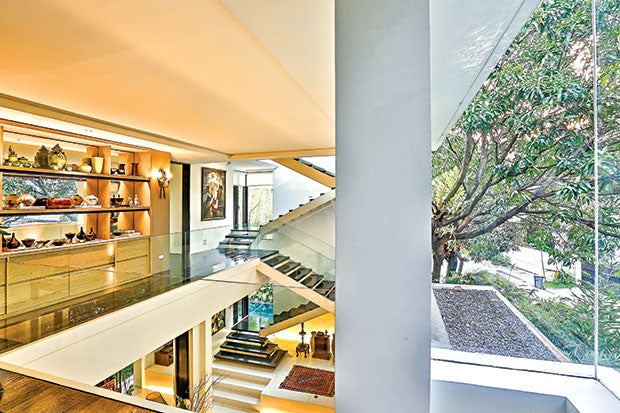 SEAMLESS Salient features of the house is the prodigious space, with floors divided on split levels and open interior floor plans with fewer walls. The design seamlessly connects the interior with the exterior. The canopy or media agua doubles as a rock garden. Photos by PJ Enriquez 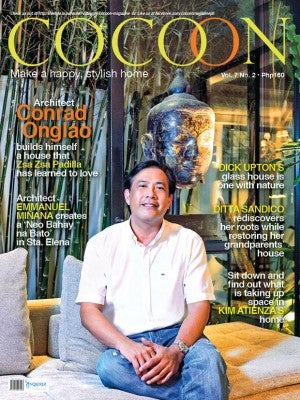 “Fences? What for? No fences lend the feeling of openness. That’s how the property starts,” says Onglao.  “If I build a fence, how will you see the house?”

The architect’s approach to the modest lot area of 604 sqm. was to build a four-level house with a total  1,000 sqm.

To emphasize the streamlined architecture, he painted the shell in white Venetian plaster, a classic wall  finish made of lime and marble that was used in Italian villas.

Any visitor coming from the chaos of the city would be comforted by the sound of gushing water and the  sight of colorful koi swimming in the pond.  One enters the house through the giant corrugated swivel  door, passing through the voluminous vestibule and sculptural staircase, and rests at the courtyard  bordered by a placid pool.

“I have one concept: You can see through anything. That is how I created the space,” explains Onglao. He’s referring to glass balusters on the stairwell and in the music area and the glass walls that reveal a successive sequence of spaces and greenery.

“In Manila, people want everything compartmentalized. Wall, wall, wall. There’s nothing wrong with that, but I prefer transparency to create the illusion of more space,” he adds.

Since he loves to entertain, the activity is centered in the open kitchen and in the terrace overlooking the pool. On special occasions, tables and cushions are laid out on the poolside.

“The house surrounds the pool so everything looks interconnected,” he adds.

Extending to the rear of the lot is the formal living room and dining area. Since one of Onglao’s basic design tenets is to have the interior living spaces integrated with the landscape, this space is enclosed in glass, allowing a fusion of the indoors and the outdoors. The backdrop that is the outdoor greenery softens the prim lines and volumes of the furniture indoor.

On the higher floors, the master bedroom has a vista of the pool and the grove of mature fruit trees below.  Even the corridors are lined with floor-to-ceiling glass to allow an unobstructed view of the outdoors and to facilitate maximum ventilation.

The open roof deck leads to a guest suite adorned with neoclassic furniture, a bathroom with its private courtyard, and a gazebo where guests can lounge and chill. At night, the lit city skyline becomes a priceless panorama, enhancing an ambiance that is both romantic and serene.

Onglao’s interiors are fastidiously detailed with the use of quality materials such as Italian tiles for the flooring, raffia on the walls of the guest powder room and pantry, frosted glass for privacy in the bathroom, graphicote walls in the open kitchen, and Volakas marble for the kitchen countertops.

In décor, Onglao favors the timeless look over trends. “There is nothing original in this world. Everything is an evolution of something. You get inspired by something and it takes a life of its own. The inspiration for the interiors was the Chanel boutique—black, white, and a lot of doors.  So every time you’re off track in design, you go back to what is understated.”

Through the years, Onglao has accumulated Oriental artworks which are artfully composed in the garden and living spaces.   Giant buddhas and statues of Ganesh are propped up like protectors in the garden.   Onglao built display shelves that are lined with mirrors to add visual depth.  Indonesian masks, Muslim tops, bronze pots and vases from Thailand and Bali, fu dogs from Los Angeles, and Oriental musical instruments are presented like treasures.

Lighting also plays a vital role in his design. The spaces are balanced by a combination of task lighting to provide illumination where needed,  indirect lighting for mood, and accent lighting to highlight the paintings and collections.  For aesthetics, he favors floor cove lighting and uplighting, a hidden source of lighting emanating from the floor that is cast upwards to illuminate the walls and the ceiling. It “sculpts” the space.

Onglao attributes his design orientation to his  training. After graduating with a degree in Architecture from the University of Santo  Tomas, he worked for an architect-Dominican priest who imparted to him the beauty of symmetry. This became evident later in the way Onglao would arrange elements.

His work experience in American architectural firms, when he was based in Los Angeles, is  impressive: Langdon Wilson, Lee and Sakahara, and Harold Thompson. His foray into interior design yielded the Chanel Boutique in Beverly Hills, which expressed the late couturier’s aesthetic.  Gabrielle “Coco” Chanel once said, “Women think of all colors except the absence of color. I have said that black has it all. White too. Their beauty is absolute. It is the perfect harmony.”

The aesthetic left an impression on him so that it became a favorite template.

Onglao also imbibed the California sensibility in his future works. “What I like about California is the casualness and outdoor feel.”

After 15 years in the States, Onglao and his then wife, interior designer Victoria Almario, came to the Philippines to cater to Japanese clients and the local hotel industry.  When their marriage ended and they went their separate ways, Onglao was humbled.

“Although it was my lowest point, I got past it. Time heals,” he reveals.

The Panlilio family gave him a project for a condominium and a hotel in Vietnam. Subsequently, Onglao attracted Manila’s crème dela crème. One of them was Bettina Aboitiz, who would be President  Gloria Macapagal-Arroyo’s social secretary. Aboitiz commissioned him to renovate Bahay Pangarap in Malacañang. This is now the official residence of President Noynoy Aquino.

Aboitiz then introduced him to another client, Sharon Cuneta, who in turn, set him up with singer-actress Zsa Zsa Padilla. Their love story has been chronicled in the media.

“You’ll never know whom you meet in this journey,” he says.