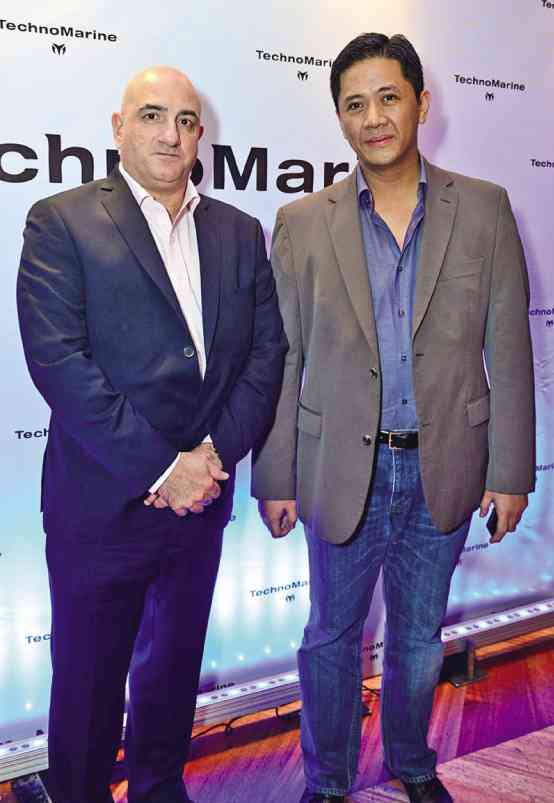 It was love at first sight for moi the first time I saw the ultra-modern TechnoMarine watch, which I’ve been wearing since it was first launched in town.

Its fame spread like wild forest fire, and now TechnoMarine has come out with its latest collection at Opus in Resorts World Manila.

Fun activities were held, like the “Design your own TechnoMarine” contest, where the winner was given a TechnoMarine watch, no less, dahlings.

Naturellement, with such a bash for TechnoMarine’s latest styles, there was sumptuous food, paired by an endless flow of drinks that pumped the guests’ adrenaline higher, palanggas.

Also introduced were TechnoMarine’s newest ambassadors—Bianca Gonzalez, Kiefer Ravena, Phil Younghusband and Heart Evangelista, who are at the top of their game.

Bianca personifies TechnoMarine’s Cruise Ceramic line that has a smooth, sensual exterior, and craftsmanship that ensures its durability.

Much like Heart’s stature, TechnoMarine’s Cruise Treasure Quest with diamonds brings a new twist to an old favorite. Following the success of the Cruise Treasure timepieces, the new edition adds luxury elements such as mother-of-pearl, pink gold, white diamonds and blue sapphires.

‘Women on the Glow’

“Liberation through enlightenment and inspiration” was the central theme at Zonta Club of Muntinlupa and Environ’s (ZCME) 25th anniversary celebration, dahlings.

The event, dubbed “Women on the Glow,” was the group’s latest endeavor, a benefit event for Saklolo at Gabay ng Ina at Pamilya (Sagip), a 24-hour crisis center for abused women and children.

Portraits of past and present Zonta officers, as well as influential women in various fields, were unveiled, showing the unique “glow” factor of 25 strong, inspiring women movers and shakers, palanggas.

Garcia led the ribbon-snipping at the event’s venue, Forbes Park Pavilion. Host Mariel Padilla introduced the guest speakers and Zontians Menchu Henson and Cristina Henson Ngkaion. They all gave inspiring speeches about the organization’s main beneficiary, Sagip, as well as the amazing results of the current campaign.

Some P500,000 worth of donations, for the disenfranchised women and children under Sagip, that ZCME raised proves that “national growth is possible, one step at a time. Women who are dedicated to the less fortunate will be there to help whenever they can.

Our town’s jazz aficionados were treated to a fine performance by the Buzz Bros Band from the Netherlands recently at Martinis bar of Mandarin Oriental hotel.

The band was in the lineup of the recently concluded 2nd International Jazz Festival at the Cultural Center of the Philippines.

The Martinis gig was held with support from the Netherlands Embassy of the Philippines. Dutch ambassador Ton Boon von Ochssée was spotted at a front table with his wife Martine. They were joined by Mandarin Oriental’s newly appointed GM Torsten van Dullemen, his wife Paola and hotel manager Oliver Kreuzer.

Martinis manager JP Lizot and F&B director Peter Pysk made sure the guests sipped only the bar’s best martinis and cocktails as they listened to the music.

For updates on Martinis’ events and promos, call tel. 7508888 or e-mail [email protected]