Doggone it, these docs are too cute! | Lifestyle.INQ ❮ ❯ 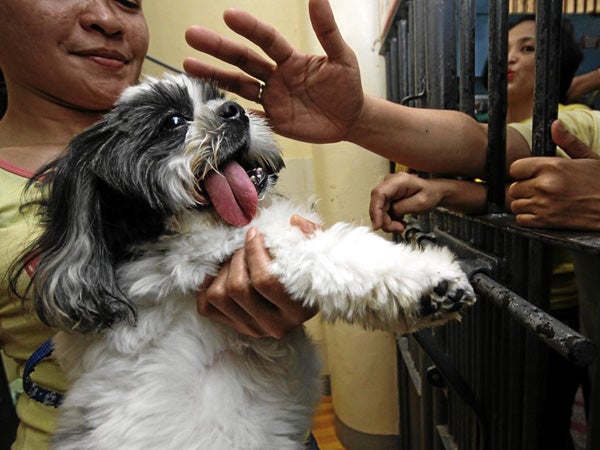 Doggone it, these docs are too cute!

Neatly groomed and sporting purple scarves around their necks, Bianca, Kohler and Adonis make their way to the crowded cells of the Mandaluyong City Jail.

Immediately, women inmates rush to the cell bars to catch a glimpse of these adorable visitors that seem just as glad to see them.  Why, the trio are even wagging their tails in pleasure!

Bianca, Kohler and Adonis are cuddly dogs that go by the honorific “Doctor.”  Just by being there, the three visibly lighten up the mood in any place,  jails included.

The furry creatures prove irresistible, as even convicted felons reach out to pet them while the less inhibited rush to cuddle them.  The dogs are as demonstrative. Bianca plants a friendly buss on every cheek presented to her, like a celebrity bestowing favors on a fan.

Like medics, the dogs are seen to provide a healing effect on people they interact with.   “Dogs don’t judge appearances. They don’t have ulterior motives but they will give relief by making you happy,” says Anna Cabrera, Program Director of the Philippine Animal Welfare Society (PAWS), of the healing powers of a dog’s playfulness.

Represented in the country by PAWS, the “Dr. Dog” program is the pioneer project of the Hong Kong-based animal charity group Animal Asia that aims to promote animal welfare through human welfare. The program started in the country in 1995 and currently has 10 dogs in its roster.

Dr. Dogs visit patients in cancer wards, orphanages and even prisons, and offer sessions that include cuddle time, parlor games and “prescription” writing. Despite the heartbreaking conditions of children in cancer wards or the desolation of folks in elderly homes, the dogs are always cheerful and friendly, says Anna. They provide that much welcome breather that patients need.

Dr. Margarita Carpio, a veterinarian at the Vets In Practice (VIP) Hospital, says that being energetic and lively is one of the qualities a dog must possess for it  to be part of the Dr. Dog program. Carpio, proud owner of 7-year-old Dr. Kohler, joined the program in 2005, initially as a bonding activity with her dog.  But Kohler’s outgoing and sociable personality made him a perfect addition to the program. “Kohler likes to get attention, but he doesn’t bark or turn violent. So whenever people hug him, that’s heaven for Kohler,” she adds.

Pet owners Christine and Jojo Roquim reveal that they entered Bianca and Adonis in the program as a means to share with others the love they get from their two dogs. Witnessing special children warm up to their dogs is exhilarating, Jojo says.

Likewise, interior designer Jenny Panes, owner of Dr. Dog-in-training Eddie, a 4-year-old Labrador, says this is her way of contributing to the welfare of less privileged children.

At the Cottolengo Filipino in Rodriguez, Rizal, an institution dedicated to the care of abandoned male special children, Carpio and her friends once decided to celebrate her daughter Roxy’s birthday by conducting a Dr. Dog session. Carpio and other volunteers visited bedridden children with their Dr. Dogs.  At first, some of the children refused to touch the animals, turning away and showing signs of agitation. But after a few minutes of cajoling and showing the dogs to the children, the little ones began to stroke the soft and fluffy bodies of Kohler, Bianca and Adonis. As they warmed up to the pets, they began cuddling the animals as though they had known them for a long time.

Maritess Bautista, a social worker at the institution, notes that activities such as this build trust in the children, who often find it difficult to open up to people due to their circumstances. In some cases, the tactile therapy helps in developing the communication skills of children with special needs. The dogs bring a special kind of affection devoid of agenda that the children need, making them feel special and loved.

Despite their busy schedules, Carpio and other volunteers make sure to join the sessions regularly. Carpio says she recommends the program even to non-pet owners as she believes it teaches us how animals can give back. “Even for an hour the patients and their families are transported to another place when they play with the dogs. They forget their pain.”

As for the dogs, they obviously live up to their title. In fact, you might as well call them Dr. Love.  Without knowing it, they provide both to their patients.