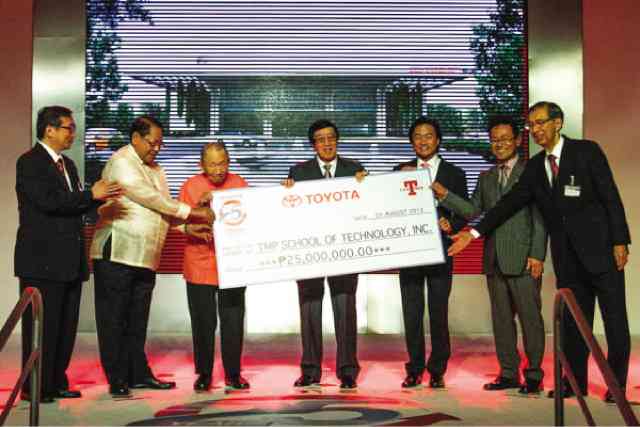 The predominantly dark-suited guests who gathered for the 25th anniversary of Toyota Motor Philippines (TMP) weren’t the usual car enthusiasts. It was mostly a crowd of businessmen, government officials and members of the diplomatic community who filled up the Rizal Ballroom of the Makati Shangri-La hotel.

Dr. George S.K. Ty, group chair of the Metrobank conglomerate of which TMP is a part, happily acknowledged the goodwill extended by the well-wishers. “The relationships we have built and the sense of purpose that has united us with our partners have made our company’s existence meaningful and fulfilling,” he said in his brief remarks. “We share this happy day with all who have stood with us in our journey.”

Toyota executive vice president Yasumori Ihara, who flew in from Japan for the occasion, mentioned that the Japanese car manufacturer’s presence in the country antedated the partnership with TMP.

“From the time of Delta Motors Corp., the history of Toyota in the Philippines is almost 50 years,” he said. “After Toyota’s withdrawal during Marcos’ time, we were glad to enter the Philippine market once again with the strong cooperation of Dr. George Ty and Mitsui & Company, and start a new business as Toyota Motor Philippines Corp.”

Ihara was assigned to the Philippines during the early development of the new partnership.

It was then Toyota president Dr. Shoichiro Toyoda who sought out the Metrobank founder to explore a partnership.

“I don’t know why they approached me,” Ty said. “I told them I was a banker and did not know anything about the car industry.”

He was, however, persuaded to accept the invitation to visit the company’s headquarters and manufacturing plants in Nagoya. It took a few months and much persistence from Toyota’s Manila chief representative Masao Mitake before Ty agreed to the partnership.

It helped that the outlook for the Philippine economy was improving by then. The time seemed opportune for a partnership. With it, Mitake became the first TMP president, while Ty had majority share in the company.

A spanking red Vios was on display by the lobby entrance of the reception, highlighting one of the two best-selling models that has catapulted Toyota into market leadership position in the country. Current TMP president Michinobu Sugata reported that the numbers of J.D. Power Asia Pacific showed Toyota in the top position in the 2013 Philippines Customer Index, with the Innova giving the company its 11th consecutive year in the number one slot for passenger car sales, commercial vehicle sales and total sales.

A few weeks earlier, Toyota president Akio Toyoda had flown quietly to Manila on the invitation of Ty. The son of Dr. Shoichiro Toyoda made time in his full schedule to honor the partnership, as well as to visit the Toyota School of Technology, the training facility which Ty had bankrolled as a gift of gratitude for the successful collaboration between the two companies.

The P350-million TMP Tech is a world-class technical school that aims to produce highly skilled automotive technicians who will serve Toyota’s local and global network. The project, covering a campus of 10 hectares in Sta. Rosa City, Laguna, is the first of its kind and is a brainchild of Ty.

“I would like to show my deepest gratitude to Toyota Japan for a very successful partnership over the last 25 years,” he said during the reception. “I also wish to express my sincere appreciation to the Philippines for the many opportunities it has given me. I would like to reciprocate this by creating better opportunities for the Filipino youth through world-class quality education.”

A high point of the evening was the ceremonial turnover of the TMP anniversary gift donation of P25 million to Toyota Motor Philippines Foundation, the social and humanitarian arm of the company.

The company conscientiously gives back to society as part of its corporate mission. Aside from economic contributions through taxes and duties paid, Toyota’s CSR activities cover health, education, environment and community service. Its flagship projects include the GT-Toyota Asian Cultural Center at the University of the Philippines Diliman; the Philippine Peñablanca Sustainable Reforestation Project in Cagayan province; the Toyota City of Sta. Rosa GK Village; and the Toyota Adopt-A-Forest Project in Los Baños.