Where the wild things – and animals – are | Inquirer Lifestyle ❮ ❯ 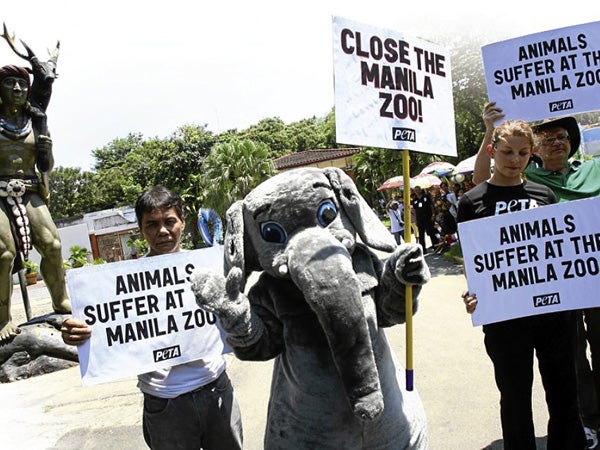 Members of the People for the Ethical Treatment of Animals (PETA) protest outside the Manila Zoo. photo by Niño Jesus Orbeta

Where the wild things – and animals – are

Wild animals are not called that just because. They are meant to stay in the wild, where being normal means roaming around hundreds and hundreds of acres of land. They also have this thing called migration: a pack, herd, or school of animals travels thousands of miles to find food and a better place to breed.

Elephants, for one, live within a herd, take care of each other and grieve for a long time when they lose a loved one. Like humans, animals have their own way of interacting with one another. They have a language, a way of life, and even a chain of command.

So imagine how life must be for one of Manila Zoo’s longest residents, Mali, who has not interacted with any of his own kind for close to four decades.

The argument of whether the government should shut down Manila Zoo and send the animals to sanctuaries has been going on for years, with no resolution to this day.  While humans bicker, animals suffer in silence.

The People for the Ethical Treatment of Animals (Peta) Asia-Pacific has been lobbying for the zoo’s closure for a long time, and has argued against the common belief that the zoo is  an educational venue for kids to learn about animals. Says  Peta’s Rochelle Regodon: “It is wrong to subject animals to a life of misery and loneliness, for whatever purpose. What are a few fleeting moments of distraction for parents and children can mean a lifetime of misery for the animals.”

The misery is particularly glaring because of the Manila Zoo’s limited resources, she points out. The cages in the city’s zoo are cramped, the steel bars are rusting, the walls are old, and trees for shade and oxygen are obviously scarce. The area for tigers and lions is made of unnatural concrete, denying the big cats the pleasure of climbing trees and scratching their branches. Snakes can’t even stretch and slither.

“We suggest that Manila Mayor Alfredo Lim focus instead on growing more trees and creating more parks in Manila,” says Regodon.  This, she adds, would attract more migratory birds that would then flock to Manila naturally.

“A zoo’s  manufactured habitats usually preclude an animal’s natural behavior like flying, swimming, running, hunting, climbing, scavenging and partner selection. The physical and mental frustrations of captivity can lead to abnormal, neurotic and even self-destructive behavior such as self-mutilation,” Regodon continues.

But why care more for animals and deprive humans a cheap source of pleasure, some quarters might ask.

Peta, clarifies Regodon, was established to fight for animal rights, because the animals themselves don’t have the voice to speak up.  Fighting for them does not necessarily mean putting them ahead of humans’ rights. There is no point of contention. “Everyone – animals and people alike – deserve to be treated well,” she adds.

Regodon points out that the usual interaction between animals and people in the zoo might also be harmful for both. This interaction usually happens when people toss their garbage into the animal enclosures, or at the animals themselves.

“If people are truly interested in having children learn about animals who live in the wild, there are several respectable sanctuaries that rescue animals, which welcome volunteers and visitors precisely to educate children on this issue.”

As Peta has always argued, “Zoos are teaching children the wrong lesson. They teach kids that it is acceptable to keep animals in captivity, bored, cramped, lonely, and far from their natural homes. What we see at the zoo is hardly a true picture of these animals. Animals don’t pace back and forth constantly within the space of a few feet; elephants don’t sway and rock in one position endlessly. Signs typically tell visitors little more than the names of the animals, where they can be found, and what they eat.

“Animals’ normal behaviors are seldom discussed – much less observed – inside the zoo because their natural needs are rarely met in zoo environments. Many animalswho live in large herds or family groups in the wild are kept alone or, at most, in pairs inside the zoo. Natural mating behaviors are virtually eliminated by regulated feeding and breeding regimens. Animals in the zoo lack privacy and have little opportunity for mental stimulation or physical exercise.”

These animals may no longer be fit to live in the wild, what with years of living in enclosures. Introducing them to a new pack may take years, if ever that day comes. While other animal welfare groups suggest that the zoo stop from adding more animals and make it an animal-friendlier sanctuary instead,  Peta stands its ground and says that the animals should instead be sent to a sanctuary.

“Zoos tout their participation in species preservation, but the vast majority of animals displayed in zoos are not endangered, and captive breeding programs do little to protect wild populations,” Regodon explains.

Peta once attempted to rescue the zoo’s lone orangutan and send her to a sanctuary in Borneo. But the orangutan has died without seeing or experiencing life outside the steel cage. Today, Regodon and the rest of Peta-Asia Pacific are once again exerting efforts to save another “loner”: the elephant Mali.

“We hope Mayor Lim has a change of heart and allows us to send Mali to a reputable elephant sanctuary such as The Elephant Sanctuary in Tennessee, where she will be able to browse and graze, pluck fruit and leaves from trees, take mud baths, and spend hours  swimming and playing in the water.”

As for the argument of where children can learn about animals, there are always books and TV shows. People learn about history without having to resort to a time machine to actually experience life then, Regodon adds.

She suggests instead that the zoo be turned into a botanical garden to add more greenery in the metro. As for other forms of entertainment, she has this to say:

“Manila is a metropolis consisting of 16 different cities: there is so much to do! For example, Binondo – which was established in 1594 – is home to the world’s oldest Chinatown. Ever heard of power kiting? Every Saturday and Sunday from 4 p.m. to 6 p.m., near Manila Bay, people can learn how to  power kite for only P500 (think of it as skateboarding-meets-paragliding). There are also free concerts in the Rizal Park Auditorium every Friday and every Saturday in Paco Park.”