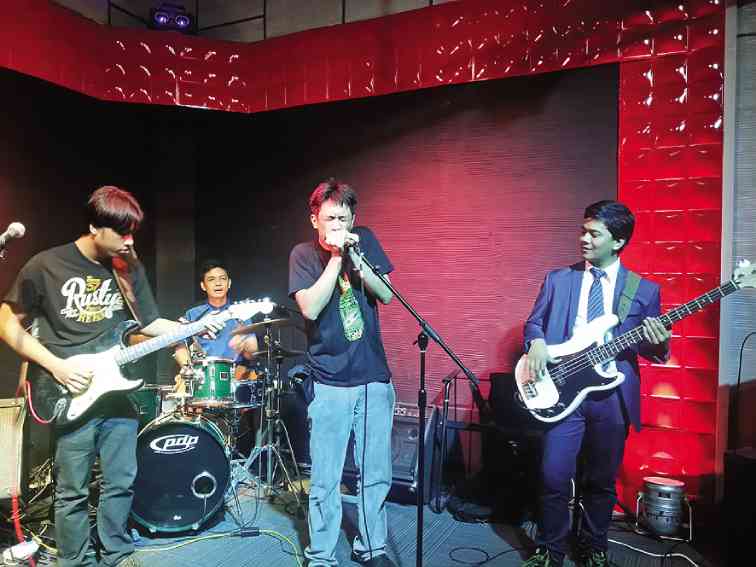 Since Bamboo rarely performs in small gigs, is there anyone else whose passion and style can stir excitement in Manila’s live music scene?

We are happy to report that, yes, there are others out there whose energy and musicianship are worth your attention. They may not be as rock-star famous as Bamboo, but when they perform, the audience worship them like gods.

Every Wednesday, the crowd at Aruba in Metrowalk, Pasig, get their kicks from a live-wire singer named Milan. Originally the front man of the Bicol band Blah which released one album with Warner Philippines in the 1990s, Milan (born Hammilan Pavoreal) now leads his own group that concentrates on playing the club circuit.

At Aruba’s 11th anniversary party last month, Milan mesmerized guests with his fiery performance and wild man antics. He jumped on top of tables, struck kung fu poses, imitated a ballet dancer, ran around the club, and even somersaulted onstage, his feet landing on his drummer’s kit.

But he’s got a problem with his new female vocalist, who seemed to be out of place in a pop-rock band. It would also be good for Milan to gradually inject some of his own songs into the band’s repertoire, even as he makes an effort to play new covers each week at Aruba.

It would be a shame if his compositions, many of which are darn good, won’t be heard by his club fans.

Love of the blues

It was the band’s first gig after winning the top prize in the annual Cotai Jazz and Blues Festival in Macau last week, beating four finalists from the US, Italy and China out of 118 aspirants from other countries.

Still a trio but having new members, bassist Oliver Salaysay and drummer John Jason Garcia, the Bleu Rascals’ love of the blues is anchored on Paul Marney Leobrera’s leadership as guitarist and singer. Overcoming a congenital deformity in his childhood years, Leobrera has been delving deep into transforming sadness into a cathartic feeling—and he’s getting better at it.

At Primos he coaxed emotions out of his axe in a howling tone that echoed with the influence of his heroes, Stevie Ray Vaughan and Jimi Hendrix. That night, Leobrera couldn’t sing because he shouted himself hoarse after winning in Macau; but no matter, his guitar-playing alone was worth our time.

Another group, the Ian Lofamia Band, jammed and impressed us with its own bluesy style infused with youthful verve.

But Primos’ management should do something about its menu, specially the sizzling baby squid, which at P350 was too expensive for its quantity. The ice-cold San Miguel Pale Pilsen though was reasonable at P300 a bucket.