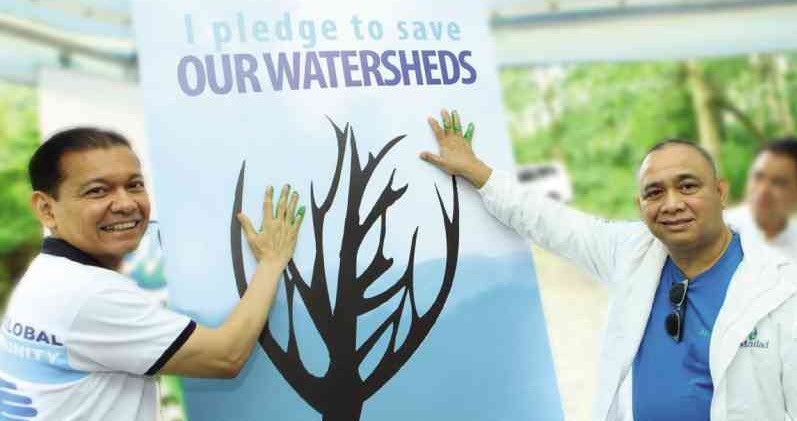 Citi Philippines and Maynilad have partnered in a program to encourage their customers to plant trees and be “stewards of the environment.”

The inauguration was done at the La Mesa Ecopark and led by Citi CEO for the Philippines Batara Sianturi and Maynilad corporate quality, environment, safety and health senior VP Francisco Arellano, no less.

“Citi is pleased to partner with Maynilad to promote this green marketing initiative,” said Sianturi.

“We are offering our clients the convenience of Citibank One Bill while promoting a greener environment.”

During the super event, Sianturi and Arellano, along with senior executives from Citi and Maynilad, took the “Water Warrior” oath and committed to do their share in saving watersheds.

They also hand-printed tree leaves on a pledge board to symbolize their commitment to be stewards of the environment. The program ended with planting ceremonies using narra saplings.

To join the “Be a Tree Steward” promo, just enroll your Maynilad bill under Citibank One Bill until Oct. 31.

Aside from Maynilad, Citibank One Bill also accepts payments and donations from different telecommunications, cable and electricity companies.

And if you are regular donors of Unicef and World Vision, you can choose to enroll in One Bill to ensure uninterrupted contributions.

The Ernst and Young Entrepreneur of the Year 2013 awarding ceremonies were held last week at Makati Shangri-La Hotel’s grand ballroom.

Presented were the 12 outstanding finalists representing enterprises from diverse industries from various regions in the country, palangga.

The Young Entrepreneur award was given to Juliet D. Herrera, president and GM of Serenitea Cha Kitchen Inc.

Bacolod high society was represented by the Ciocon famille led by patriarch Roseller and Ditas, and  Delia Ciocon-Granada, who came in a fantastic Escada number with cousin, journalist Pinky Concha Colmenares.

Vault magazine, the glossy men’s lifestyle magazine, marked its third anniversary at the Rigodon of the Peninsula.

With David Celdran, no less, as the main man and chief editor, Vault has strived to present highly curated reports on dining, travel, fashion and automobiles, natch!

“Gilt” was an event inspired by the Great Gatsby era of the roaring ’20s. The magazine invited one of the best très chic car brands, Rolls Royce, to showcase and unveil the very first unit of the Rolls Royce Phantom in the Philippines.

Wow! Now, dahlings, that’s what glitz and glam are all about.

Adding musical flair to the happening was a performance by Soundline, with renowned jazz singer Skarlet Brown.