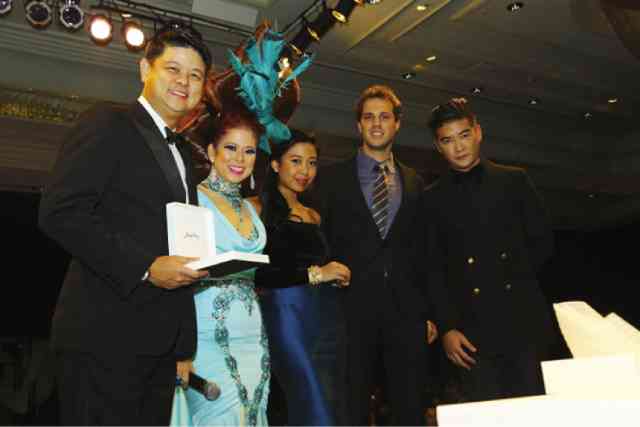 Pearls as wearable works of art

Pearls were the first real jewelry I ever had. Before I evolved into an obsessive accessory junkie, I used to wear only a strand of pearls and simple earrings.

I guess to the young Sea Princess, simplicity was a treasured trait—even if that may seem unimaginable now.

Fast forward to the present day, when pearls are no longer just a delicate string of jewelry but are now fashioned into masks, pearl-studded dresses, capes and even show-stopping headpieces. Jewelmer Joaillerie (www.jewelmer.com) is the leader in the renaissance of the pearl.

The second annual Jewelmer Gala was recently held at the NBC Tent, in order to launch the Jewelmer Spring/Summer Collection for 2014. The theme was “l’accessoire dans tous ses etats” or the accessory in all its states, highlighting the importance of accessories in a woman’s wardrobe to complete her personal style.

The Jewelmer collection also showcased the South Sea pearl as unique yet wearable works of art. Gaelle Branellec, Jewelmer’s creative director, wanted to bring the power and impact of pearls in all their creations to the forefront of international public consciousness, after earlier debuts in Hong Kong and Moscow for the Charleston, Guimard, Madame de Pompadour and C’est la Vie collections.

The entire Jewelmer range is massive, with other collections named Tropics, Rosone, Petite Fleur, Dolce Rosa and Via Rosa.

Thrilled guests were able to acquire many of the pieces with their Jewelmer Joaillerie Platinum Mastercard, powered by PNB Allied Bank. They were also totally pampered, chauffeured in by Jaguar and served with Moët Hennessy’s Belvedere vodka and Grand Marnier. The gourmet spread was prepped by Margarita Fores.

Jacques Christophe Branellec, director of Jewelmer, began on a somber note with a moment of silence for the earthquake victims in Bohol and Cebu. He noted that many of their pearl farmers are from Cebu.

Jewelmer Joaillerie arranged for two incredibly stunning strands of champagne, semi-baroque, golden South Sea pearls worth around $6,000 each to be auctioned at the Red Charity Gala, which was held last week. The auction proceeds all went to the earthquake victims.

Kaye Tiñga, co-chair of the Red Charity Gala, noted that the strands went to two generous bidders, one of whom wished to remain anonymous. The other was my brother Paolo Prieto, who presented it to his thrilled wife, Ria.

The Red Charity Gala has a dual goal, to showcase the genius of a featured Filipino fashion designer and also to raise funds for charity. Aside from donating to the Philippine Red Cross, Assumption HS 81 Foundation and Gifts and Graces, the Gala also supported the Megawide Foundation for the Philippine Children’s Medical Center (PCMC) renovation project.

Megawide is sponsoring the renovation of the service ward of the hospital in Diliman, Quezon City. For over 30 years, the PCMC has delivered the highest quality service to its patients, from newborn infants to adolescent children in need of both general and specialized medical care.

Renovating the entire 1,800-square-meter facility involves upgrading the architectural components to service more patients and giving ample room for the medical staff as well. The PCMC is an old building and is in danger of being evicted from its current location.

I’m still in a daze over the Red Charity Gala. There are just too many wonderful photos to choose from. I will do the full coverage next week, focusing especially on our presenter, Bench.

As the night unfolded, the attention of the guests was directed to the main program where Victorinox was introduced by Darwin Bañez, AVP of the Primer Group of Companies. Darwin also honored Swiss Ambassador Ivo Sieber by sharing kind words about the longstanding and amicable relations between Switzerland and the Philippines.

The program highlighted the launch of the Victorinox Klasse card, a loyalty card that entitles members to perks and privileges. As the night’s special guest, Ambassador Sieber was called onstage once again to be dubbed as the Klasse card’s first honorary member.