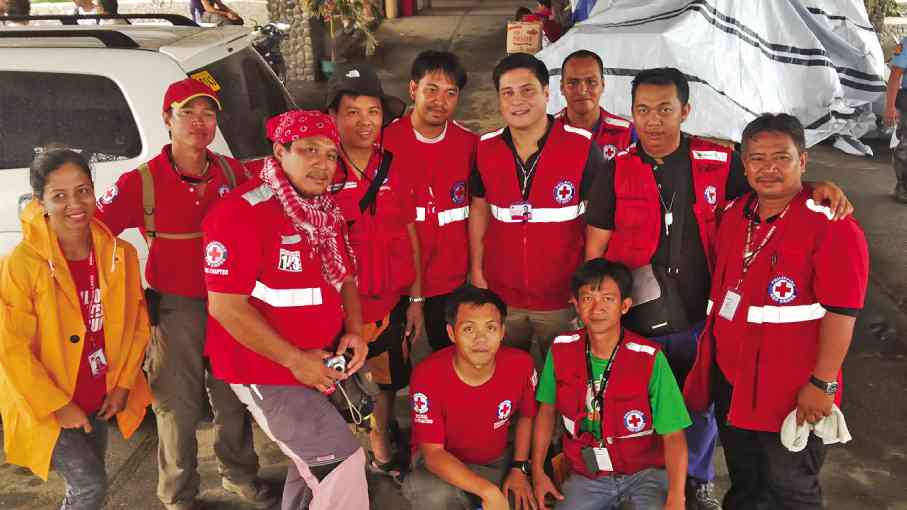 MIGS Zubiri with RC volunteers in Tacloban. They are from all over the country and have been there since Day 1.

The sky was still a deep blue, refusing to give in to the light of day when we stepped out to catch the first scheduled fast craft to Ormoc from Cebu. The atmosphere was somber as we made our way. There was little chatter as everyone in our group seemed lost in his own thoughts that morning.

Nobody really knew what to expect.

In the group were my husband Migs, his brother Manuel, cousin Iñaki and myself. Manuel’s wife, Ana, was also with us, with her uncle Carlos Garcia and brother-in-law Mike and our friends, Carlo Corro, lawyer Raqs Chavez, Yoyong Aquino, Jojo Mahusay and Jamie Yulo, Ernest Herrera and Alexis Valdivia.

Would we encounter the same images of despair and anguish as what we had been constantly exposed to (but never gotten used to) in the news? Or would we find the smiling and resilient spirit of our people that we have been proudly proclaiming to the world?

Two-and-a-half hours later, the skies had lightened up, but still, the threat of rain clouds blocked whatever sunshine may have been there. Hundreds of people disembarked from the fast craft: anxious relatives, tireless volunteers, concerned foreigners and even the Secretary of Education and his staff, bringing a plan of action for the entire Region Eight school system which had been placed directly under his command.

Everybody was here for a reason.

We were greeted by the sight of structures, folded and bent like a child’s flimsy toy in the hands of a giant. One could see the direction the violent winds had taken, based on the way it had lifted and curled the tips of pieces of roofing that had managed to hold on to the steel bars.

Centuries-old trees lay uprooted on the ground, brutally tossed aside by the same wind that used to lovingly caress their branches and leaves.

Beside the trees, there was once a children’s playground. Surprisingly, many of the structures had survived, but where laughter used to ring out, now there was only the chilling silence that said more than we wanted to hear.

Everywhere we looked, there was destruction.

It was hard to reconcile the image of Ormoc I had from my last visit with the city I found that day.

But here and there, we found signs of life slowly returning to the city. Vendors had put up stalls selling Formoso, or solo pineapples, on street corners.

A few structures were slowly being rebuilt and repaired. Using our friend Eric Fajulio’s vehicles, we made our way to the Red Cross Ormoc Chapter Headquarters where there was no sign of devastation among the volunteers and workers—only cheerful and eager faces, ready to take on the challenges of the new day.

There was a large group of young teenage girls and Philippine Boy Scouts in one corner, to pack relief items and distribute them in far-flung barangays.

Seated in the middle of the group was a smiling little boy named Rex. I asked him how old he was, and he shyly answered, “Six po.”

The son of a volunteer, he had accompanied his father, and nodded his head when I asked if he was here to help as well.

As for the young boys, I wondered which chapter they were from. The day before, we met Red Cross workers from as far as Ilocos Sur and Cagayan de Oro, all coming in to provide additional help for their besieged colleagues in Leyte. To my surprise, they were all from Ormoc.

They, too, were victims of “Yolanda,” but rather than wallowing in self-pity, there they were, counting their blessings and making themselves useful.

“No disaster can break the spirit of the volunteers,”  Erico Jusay, one of the young boys, explained when I asked why they were there when they, too, needed help.

As we left with Ruby Gernali, the RC Ormoc chapter president, to bring relief bags to the RD recommended site in Barangay San Isidro, we came across a van of American Red Cross volunteers arriving.

A white-haired man from Wisconsin recounted the previous day’s events, which included a 20-minute hike up the mountains, in the rain, to reach a barangay. He wasn’t complaining, simply stating the facts and when I thanked him, he nodded solemnly and thanked me back.

For what, I can’t imagine, but something in our country and their experiences must be making a deeper connection to them than we can ever understand.

In the barangay, everything was as expected. A few homes were left standing, though most had no roofs or walls, the trees and agricultural crops had all been flattened. But in the midst of it all, I saw smiling faces.

As we distributed relief goods from generous friends and family in Manila, I gazed into their faces and saw not the nameless shadows on the news but mothers, fathers, brothers and sisters, who could have easily been us or our own.

The children gathered around the boxes of toys shared by the children of Manila and, with great restraint, waited for their turn to receive a toy which hopefully would give them some semblance of normality. The smiles on their young innocent faces left me blinking back tears all morning. I wondered if they realized what they had just survived.

Migs moved on to Tacloban. “It was desolate, to say the least. There were so many homes battered to the ground. When the sun set, it instantly turned into a ghost town,” he told me sadly. “But I admire the strength and optimism of those who remain and their determination to rebuild their city.”

Fortunately, if there is anything good that has come out of this tragic disaster, it is the overwhelming outpouring of generosity and support from all over our country and the world, including our beloved home, Bukidnon.

Migs delivered checks for the local governments of Ormoc, Tacloban and the province of Leyte from the Bukidnon provincial employees. The employees, all 2,500 of them, had donated P1,000 each and successfully raised P2,500,000, while the provincial government added  P1,000,000.

We are also blessed with the tireless efforts and sacrifices of the volunteers who have all come to rebuild, leaving behind families and the comforts of  home.

In Ormoc, I met doctors from Mercy Malaysia working hand in hand with Red Cross Canada who had set up tents for operations, complete with generators and portable toilets, in front of the city hospital. The Canadians were only too happy to accept the help of the Malaysians since they had only four doctors serving the over 500 patients.

Representatives of a Chinese foundation were also coming in with boxes of what I assumed must be medicines and medical equipment.

But the task of rebuilding and helping is far from over, and we need to remember what a friend, lawyer Ruben Capahi, said when we asked how they were. “Today is better than yesterday. We are grateful for the help but need more. Please keep coming back, our rescuers need rescuing, our helpers need helping.”

Now, as I look back, I realize we did not know what to expect because there is no one way to describe Leyte and our kababayan. We may see one or two dimensions in the news, but life is never that simple.

Just as our world is full of contrasts, so is Leyte, and all other places hit by Yolanda, where devastation lives side by side with hope and the determination of the human spirit.

On one hand, life as they know it has come to an end, but on the other, it must also move forward, albeit in a way all too different for many to even imagine.

The same goes for all of us. Whether or not we were hit by the typhoon, we must now take each moment, and while we live it as we always did, fulfilling responsibilities and taking care of our families. We must also heed our natural instinct to look beyond our personal lives.

We must continuously reach out and take the hands of those in need, and navigate this world together because we are all connected, we are all human, we are all Filipinos.