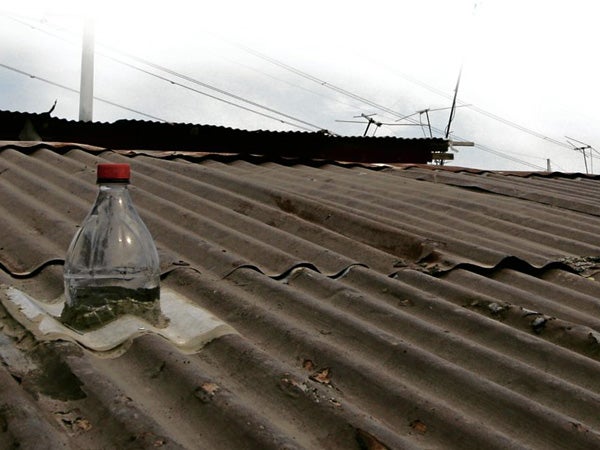 LAGUNA—After some time in any one of the homes in Sitio (sub-village) Maligaya, there’s no way of telling whether it’s day or night. The noonday sun may be shining brightly outside, but most dwellings in the shanty community, which sits along a railroad track in San Vicente Village in San Pedro, Laguna, are shrouded in 24-hour darkness.

Dim and narrow alleys that allow only one person to pass at a time lead to houses packed so tightly that hardly any daylight gets through. And even then, to maintain a sense of privacy, curtains are strung within households to create separate rooms. And so the darkness deepens.

“It’s terribly dark and stuffy in my child’s room because there are no windows,” says 49-year-old Dang Cas in Filipino. Dang lives with her four children in a 20 square meter room of thin plywood walls.

Dang’s neighbor, 68-year-old Juliana Bista, lives in a similar dimly-lit house close by, but nearer the end of the walkway.  The structure is built low, she says, and there is barely room for the eight people who live there.  Natural light only comes in when the main door is kept ajar, otherwise a single bulb has to be left on all day to provide light for four separate quarters within.

“A lot of the houses here don’t turn their lights off anymore. They leave them on 24 hours a day,” says Jenny Miole in Filipino. Jenny runs a small sari-sari store near the entrance of the village.

Lately, however, things have been looking a little brighter—and hopefully happier—for Sitio Maligaya.

Thanks to a project, “Isang Litrong Liwanag, (a liter of light),” hundreds of families in the community have been taught how to use safe, sustainable light through solar bottle bulbs, which replace electric light during the day.

Solar bottle bulbs are simply empty 1.5-liter plastic soft drink bottles filled with a solution of water and chemicals that harness the power of the sun to provide light.  Each bulb provides the equivalent of up to 55 watts of light from daylight.

The process is simple. The bottle is fixed in place with a scrap of GI corrugated sheet and lodged into the roof of a house, with the top half of the bottle exposed to the sun. The sun is refracted into the water like a lens, providing clean, white light inside the house. As long as there is light outside, it will provide a 180-degree light source inside, allowing families to save on electricity during the day.

The bulb was designed and developed by students from the Massachusetts Institute of Technology (MIT) and makes use of the principle of Appropriate Technology—a concept that provides simple and easily replicable technologies that address basic needs in developing communities.

“Light is an important part of our daily life, and access to light is a right of everyone here in the country,” says social entrepreneur Illac Diaz who heads the My Shelter Foundation, which spearheaded the campaign. “Through this project, we aim to provide the whole country with sustainable light energy and bridge the gap between social classes.”

According to Diaz, many green technologies, such as installing solar panels or windmills, are very expensive to set up.  But solar bottle bulbs are easy and inexpensive to set up, and the technology can be used to provide light for homes, schools, warehouses and clinics in even remote or depressed communities.

The solar bottles are already being used to light communities in Brazil and Mexico, but the community in Laguna is the first in Asia to use the technology.  In the short time they have been used, Diaz says, the lights have already changed the lives of the people living in the community.

“These are mothers and grandmothers who take care of young children during the day while their husbands or children are at work, and workers doing handicrafts in dark areas of the house to make ends meet. In a poor country, most people cannot afford to waste money on electricity when they can better spend it on education and food,” he explains.

With barely a one month of using the solar bottle bulbs, residents have already seen a decrease in their monthly electricity bills. Cas reported a monthly savings of P200 on her electric bill, which is enough to buy at least 5 kilos of rice.

“It’s such a big help to our community especially now that the cost of electricity is on the rise),” says another resident Mang Rolly in Tagalog.

Bottle bulbs are inexpensive, made from recyclable materials and can last up to five years before the water and chemicals in them have to be replaced.

My Shelter Foundation hopes that what they started will be replicated in other parts of the country through the help of private and public groups.  Women’s Feature Service