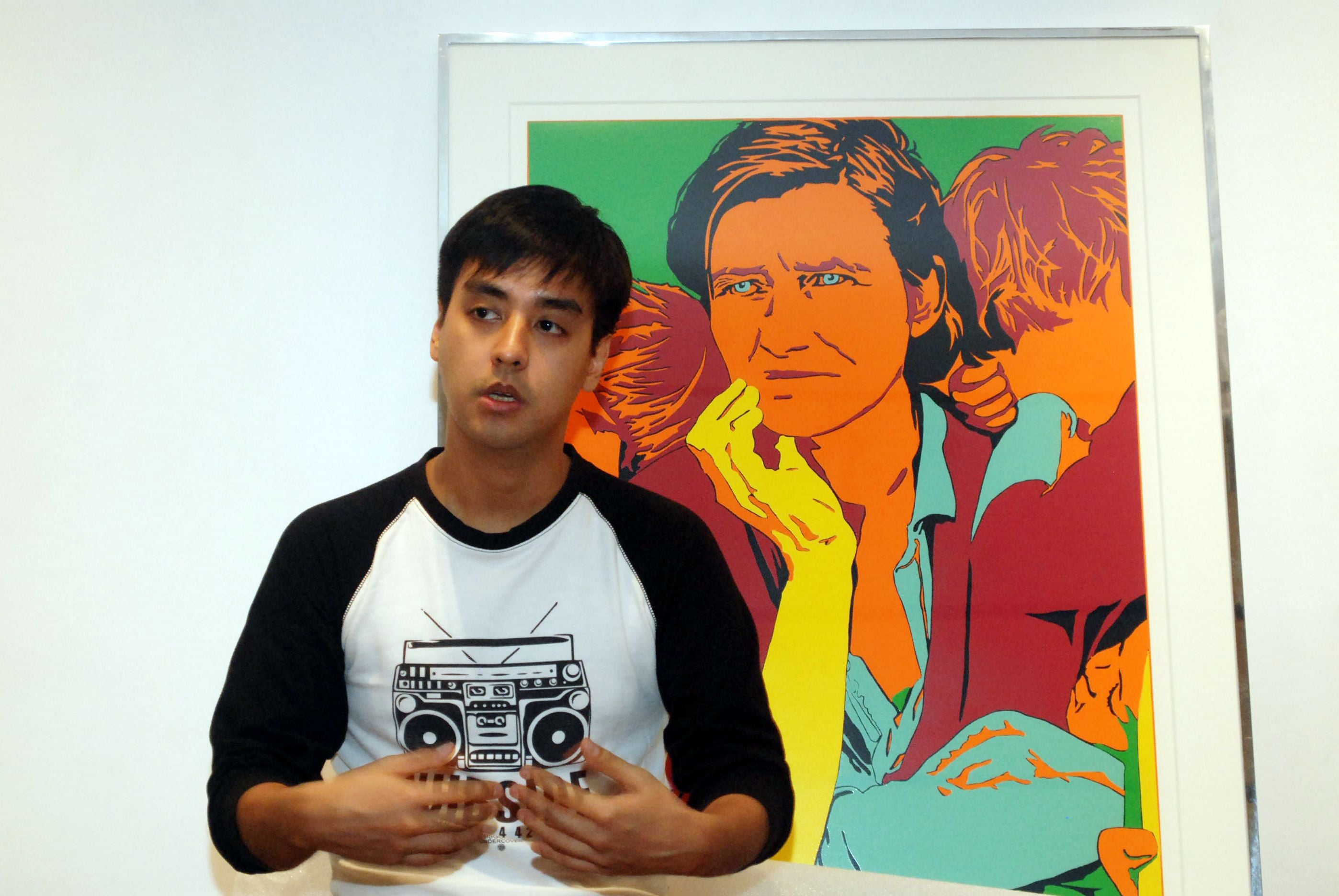 CARVING OUT HIS OWN NICHE: Alejandro describes arts and music as parallel interests (PDI Photo/Arnold Almacen)

AS FAR AS celebrity heritage goes, it can’t be easy living in the shadow of a former beauty queen and a pop icon. But Angelo Alihaj Diaz Alejandro, or Ali, seems to take it all in stride.

Born to the original “Kilabot ng Kolehiyala,” Hajji Alejandro, and the late beauty queen-turned-politician Rio Diaz, Ali was just 5 when their family left for the United States to start anew and get away “from all the chaos in Manila during the ’80s.”

But even in another continent, he became aware of his parents’ celebrity, and shared in its ups and downs.

When his dad put up a restaurant called Hajji’s, the young boy found himself “literally living” there as his parents tried to keep the business afloat.  He recalls: “I would go to school in the morning, get picked up after and go straight to the restaurant” to do homework and sleep.

“And when we closed, we’d go home and repeat the cycle the next day.”

It was when they returned to the Philippines when he was about 10, that being the son of two celebrities finally hit him.

“It was like, wow! When we got back, we started going to TV stations, do some recording, guest in shows” Ali recounts.  “My mom was in ‘Eat Bulaga!’ and there were these fans clubs.”

And like most children of celebrities, he felt the pressure to take the same route.

“To be honest, I was kind of scared of (show business),” he says. “The expectations and exploitations became apparent (when we got back). It was my mom who made sure I finished school before I did anything showbiz-related.”

It wasn’t until he was in college that he finally tried acting, a supporting role in a short-lived drama called “Ikaw sa Puso,” that starred  then fresh-out-of-“Starstruck 1” Nadine Samonte, Oyo Boy Sotto and James Blanco, and aired over GMA 7.

“It was pretty much light acting,” he says, and adds that he’d rather “just be behind (my) drums and play music.”

Alejandro finally found his stride when he left his music studies at the University of the Philippines to become drummer of the band Mojofly, a pop-rock band formed in 1999 after bassist Ricci Gurango left the band Hungry Young Poets.

“I really wanted to become a singer-guitar-player sort of guy doing acoustics. During the time, that was the all the rage. But my passion has always been drums. I could get behind a drum set and, without even thinking, I’d already have a beat, I’d already have a pattern.”

He adds, “It was really innate. If I trace it back to my family, my dad’s cousins are a family of drummers… Back when I was in the States, there would be performances every Saturday in my dad’s restaurant.  During break time or dead hours, I would get on the drums. I was about 7 or 8 then.”

It was the height of OPM alternative-pop-rock bands and the band performed all over the country, sometimes doing five or six gigs a day.

“It was the best time to come in,” Alejandro said, adding that this stint was “the best decision” he had made in his career as a musician.

In fact, these days, he believes he has become known more for being the drummer of Mojofly than being his dad’s son.

“But in either case, I am always flattered,” he says. “Being the son of the original ‘Kilabot ng Kolehiyala’ (Scourge of Co-eds) is an awesome thing,” he adds.

As for expectations that he would follow suit, he has a stock answer: “There can be only one original Kilabot. I will probably just be second to him if I try.”

The expectation is something he shares with other children of celebrities, says Alejandro. “It’s always like that, right?  I’m friends with a lot of these anak ng artists, too, people who likewise have this sort of shadow over them. I was actually asked to be part of Generations.”

Alejandro declined the invitation, however. “I don’t want to be that. It’s not that I’m not comfortable doing it, but (my sister) Rachel already did that ahead of me. She already revived (our dad’s hit) ‘Nakapagtataka.’  If I were to do something, I think it would be completely different.”

When the popularity of OPM bands waned in 2008, Mojofly disbanded to form a new band called Delara, which also split in 2011.

By this time, Alejandro was getting his Fine Arts degree at Kalayaan College, a shift that may surprise some people but which he considers a parallel interest.

“I believe that music and visual arts are really one and the same. In both cases, I get to express myself.” In fact, he adds, most artists he met at the gallery he manages also have their fare share of musicality. “It’s a common trait,” he says.

These days, Alejandro mans the Nova Gallery along Chino Roces Avenue in Makati City that his stepfather, Charlie Cojuangco, established in 2010.

The gallery, initially created to showcase and promote the Visayan art scene in the National Capital Region, now caters to almost all types of contemporary Filipino art.

His job, Alejandro says is to plan shows, work with artists and help them express themselves in a gallery platform.

It’s a job he finds immensely satisfying, he says.  “I like the fact that we get to work with other artists and know what they want to do, what they want to accomplish—and help them do that. It’s fulfilling. It’s the other end of the spectrum. I may know all the people in music, but now I also know those on the visual side.”

He adds: “It’s definitely not an easy job since art can be subjective, but it can also be lucrative—and just as competitive.”

Alejandro himself has yet to do a solo exhibit of his creations though he has joined group exhibits in Nova. “I’ve had people ask for my works outside (the gallery). But I haven’t done solo shows. That’s also in the works.”

While he does drawings, paintings and canvas work, this artist-musician also does what he calls new media art—part hand-drawn, part video and kind of like animation.

“There are already so many artists who paint. Iba naman  (I’m doing something different).”

Being with Nova Gallery has made him aware of the contemporary art scene here and abroad, although such involvement does not make him less of a musician, he says.

In fact, he recently concluded a concert series at the Music Museum called “In The Blood,” that featured five Alejandro performers—father Hajji, sister Rachel, cousins Nino and Eddie, and Ali. The concert series began Nov. 15 and had its final show on Nov. 29.

Family is apparently a priority for this young man whose showbiz  and political connections have made for a complex family tree.

He was five when his parents went to the US, and about 8 or 9 when they decided to separate before coming back to the Philippines, he says.

“My mom went ahead since she was already being offered jobs here, raket. I remember someone calling me in the States saying they were from ‘Eat Bulaga!’ and asking me to give a message to my mom because it was her birthday daw. Phone patch, that sort of thing,” he recalls.

“I was aware of my parents separating. But I understood that that was what they had wanted. So I took it upon myself to not be so emotional, so ‘emo,’ about it, though I think it made me grow up a little bit faster than a normal kid would.”

Going back to Manila after growing up in the US also brought on drastic changes for him, Alejandro adds.

“When I think about (life in the US), it was almost like a dream. I was so carefree because I was so young. But coming back here, I felt that everything was going to change.”

He recalls: “I was culture-shocked. I didn’t know how to speak Filipino, and my memories of the weather were always wet and humid. I initially missed the US, but I knew I had to fit in fast.”

Alejandro recalls school being different, mainly because he went to several.  “I went to Don Bosco, an all-boys school, after coming from a coed school. Here, school was super strict and very Catholic. I remember telling my mom, ‘Hindi ko yata kaya dito (I don’t think I can hack it here).”

He transferred to a Montessori school, where he made life-long friends. “I actually met Cristalle Belo there,” he says of the daughter of cosmetic surgeon Vicki Belo. “She was sort of my grade school sweetheart.”

In 1993, his mom Rio married Carlos Cojuangco, whom he calls Tito (uncle) Charlie. “When my mom remarried, I became a big brother to Claudia and Jaime, both of whom I love so much.”

He adds: “Tito Charlie is a very influential person in my life. More than a stepfather-stepson relationship, we act more like brothers. I grew up with him and my mom for most of my teen life. We both love art and food.”

Christmas, he says, is often spent with three families: The Diazes in Makati and Alabang where he visits with his mom Rio’s family, then with the Alejandros in Quezon City, for his dad Hajji’s family, and if there’s still time, with the Cojuangcos in Quezon City.”

“With a girlfriend now, obviously, I have to go to her parents’ house, too,” Alejandro adds of Lougee with whom he has been together for the past three years.  “I’m always in a rush to try to visit all my families in one night.”

But he adds, “I like doing that.  It makes everyone feel that I’m there for them, that I did not forget them.”

For Alejandro, Christmas is when family becomes just that—simply good company instead of celebrities casting a long shadow. •