Aaron is going back to Palo; Nikko is praying her nightmares away | Inquirer Lifestyle ❮ ❯ 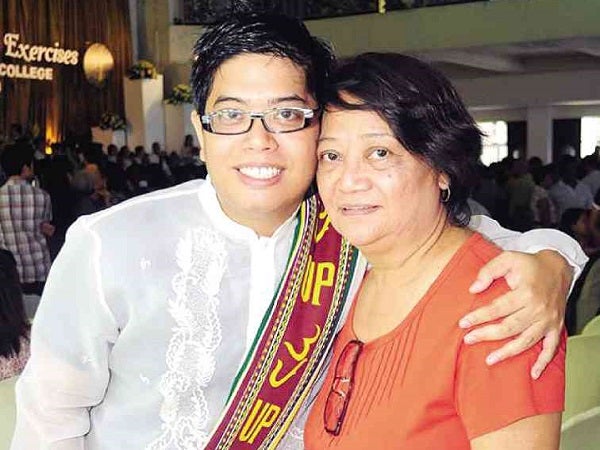 AARON Almadro with his mom Guadalupe during his UP graduation, April 2011

Aaron is going back to Palo; Nikko is praying her nightmares away

It’s been three weeks since “Yolanda” swept away his parents, and Aaron is now talking like a reporter—narrating facts in an almost clinical manner, his description so detailed that it brings you to the scenes of devastation in Palo where his family is from, and in Tacloban where his parents died.

In our former magazine publishing firm, Aaron Almadro was an editorial assistant who rose to become an art director and an associate editor of MetroActive Magazine—out of sheer skill and talent, hunger to learn, and industriousness.

I felt fortunate that, unlike others, he didn’t feel the urge to seek work abroad and thus leave our magazine. At that time, he still couldn’t because as a government scholar in high school and college, he had to serve out a few years working in the country.

In high school, he was a scholar at Philippine Science High School, and in college, in Communication Arts at the University of the Philippines. He comes from a family of engineers, his father a civil engineer and his only sibling, Carlo, a systems engineer who now lives and works in Victoria, Australia.

In our magazine years, Aaron impressed me as a quick learner, who could also think on his feet. He didn’t migrate. When he left MetroActive, he instead chose to return to Leyte, because he wanted to live and work in his hometown. Still a young bachelor, he also wanted to be with his parents who were getting on in years.

And so it was that three weeks ago, at the prodding of his mother, who was, Aaron recalled, “naglalambing,” he decided to have his parents billeted in the Tacloban Budget Hotel to keep them out of harm’s way before Supertyphoon Yolanda comes.

“Ang mga kapitbahay daw namin, nag-check-in na sa hotel sa Tacloban, so bakit hindi daw sila? (Our neighbors have checked in at a Tacloban hotel, so why not them?)” Aaron, the youngest child, recalled, almost with fondness.

So, on the day Yolanda was expected, Aaron brought his mother, 67, and his father, in his early 70s, to the Tacloban hotel near the Astrodome. He checked them in with their longtime yaya. It had to be a room on the first floor of the hotel because Aaron’s dad was a stroke victim who was hardly mobile; thus the ground floor was more convenient.

Aaron thought of staying with them but decided not to; someone had to stay behind in their ancestral home in Palo.

In vivid Tagalog, Aaron recalled that early Saturday morning: Yolanda was at her strongest, he said, at about 6:30 a.m. “Inararo kami (she plowed right through us).”

Their ancestral home was pulled apart, starting with its roof. Aaron and the rest of the household had to flee to the newer house extension. There they sought shelter under a huge bookshelf which they had toppled over and used as roof over their heads. They had to hang on to each other, literally, to withstand the force of the wind.

Midday, when the plummeting had stopped, Aaron saw only devastation around him and people in stunned silence, ambling around, dazed. He thought to himself as he set out for Tacloban: “I thought sila Mama did better.”

As he neared Tacloban City, scenes of destruction unfolded before him, one after the other. Along the way he would hear people say that many had perished in the city.

He made a dash toward the hotel as he caught a far glimpse of dead bodies lining the street. The hotel stood there, ironically, intact, but not far away from it were rows and rows of bodies. His eyes scanned the ghastly array; he hoped that his eyes wouldn’t see what he feared he would.

But there it was—he spotted the pants first. “Those were Mama’s pants,” he uttered to himself. Then his gaze rose to the blouse. Already reduced to tears, he peeled off the sheet that covered the face.

At that moment of recognition, life as Aaron knew it changed. His mother must have tried to flee the hotel room and was swept away as she ran.

Aaron ran to the hotel room, where he saw his father’s body, still and lifeless, on the floor, and that of the yaya not far away.

In the days that followed, Aaron used Jiggy Manicad’s broadcast to scribble a note to his brother in Australia: “Patay na si Mommy at Daddy.”

Aaron is now on a visit in Manila. Over coffee, I told him over and over that his parents must be gazing down at him—with gratitude, for the love and the goodness he has shown them. Just keep talking to them, wherever you are, I told him.

His brother has asked to join him in Australia, but Aaron is decided to return to Palo and help rebuild it.

When Yolanda struck, he was running his own lifestyle magazine called 8, was working as marketing manager of Nissan, and was a consultant to a government agency.

He plans to resume his multi-ventures, especially his magazine that should now be able to serve as communication catalyst for the rebirth of the Visayas. I admire Aaron’s pride of place and vision of a reborn Visayas. In this guy, a government scholarship hadn’t been misplaced.

Right here in the Inquirer office, our reporter Nikko Dizon has long been back from her five-day coverage of Tacloban. When we called her over to our Lifestyle workstation one night, we found riveting her behind-the-scene stories of Tacloban in the aftermath of Yolanda.

In the frenzy of reporting, Nikko never really looked at the faces of the dead in Tacloban’s streets. But she became familiar—yes, familiar, at the rate she would pass them by—with their forms. Nameless, faceless forms.

For a time, she thought and we wondered aloud with her, if the spirits of the dead had clung to her and followed her—like life’s dying energy clinging to matter.

However, the priests who have been giving her spiritual counseling advised her to set aside a moment every day to pray for the people who died in the disaster. Nikko was told that she was so busy in her coverage that it didn’t cross her mind to pray for the dead.

These are not malevolent spirits, the priests told her. Perhaps they’re souls who are lost and still roaming now, given their sudden death. Perhaps, we, in the Lifestyle workstation—wanting to take a breather from our late-night load and used to reading Jaime Licauco—wondered out loud that the dead don’t even know they’re already dead.

That was why, Alya Honasan butted in, her Cenacle nun friend has a good advice for the surviving kin and the rest of the country. We should say a special prayer meant solely for the people who died in the disaster, and offer Mass for them regularly.

We are a people trying to recover from the trauma of devastation, slowly picking up the pieces.

In the momentum of relief operations, in the rumor-mongering and palengke catfights in social media, and now, in our efforts to give a helping hand to rebuild the Visayas, we have somehow forgotten to say a prayer as a nation for the souls of the victims.

In fact, the Philippines has yet to offer a nationwide Mass or ecumenical service for them.