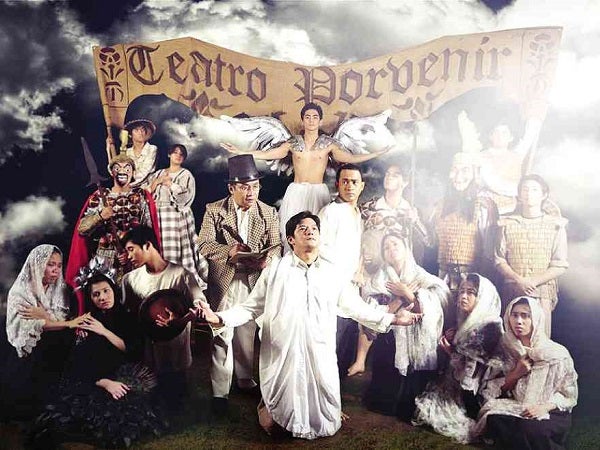 The title is a giveaway. Bonifacio is undoubtedly the hero of the piece, but he shares center stage with the other mentioned heroes, as well as Jose Rizal, who makes a cameo appearance (more on that later).

The interaction of these great men who inhabited different eras, fought different oppressors and may not even have met in real life (such as Bonifacio and Rizal) immediately establishes the play as an alternative universe (in modern-day language).

Teatro Porvenir, the titular theater company and venue, is set in another plane, allowing Dacanay and director Alex Cortez a bigger artistic space to create what Dulaang UP has described as “a re-imagining of the history of the Katipunan.”

“Teatro Porvenir” is the meeting ground where the different fathers of the Filipino war for independence establish their friendships, collaborate and launch their campaign. Bonifacio (Romnick Sarmenta) and his brothers are portrayed as lovers of the dramatic form, who intend to use it as a platform for propaganda against the Spaniards. And they find all too willing allies in fellow leaders like the younger Emilio Jacinto and Macario Sakay (Jojit Lorenzo), who, historically, was one of the last Filipino freedom fighters to resist the Americans, decades after Bonifacio’s death.

However, the character that acts as the fulcrum of the play, as the conduit between the different heroes and between the notions of art and war, is Aurelio Tolentino (Joel Saracho). According to history, Tolentino was a close friend of Bonifacio who joined him as a member of the Katipunan. He survived both Bonifacio’s death and the arrest of Emilio Aguinaldo to continue the war for freedom, but this time as a dramatist and a newspaper editor.

What is unique to Tolentino is that he traverses the worlds of both Bonifacio and Sakay in their respective struggles against the Spaniards and Americans. He was present in the campaigns against both conquerors.

In the play, Tolentino is the head of Teatro Porvenir, creating dramatic works and rehearsing his fellow revolutionaries to perform in them. However, once the first guns start firing, not surprisingly, and to Tolentino’s distress, Bonifacio, Sakay and the others give up their moro-moro aspirations to participate in the actual war.

Dacanay’s script and Cortez’s direction pull no punches to show how the revolution was eventually lost through infighting and betrayal. It is a bitter lesson all of us learned in school, but one that still packs an emotional wallop when dramatized.

The performances, especially of the leads, are affecting. Irrational though it may be, they make one wish that the outcome of history had been different.

Dacanay also makes his case that art becomes the ultimate battleground for freedom by establishing the-play-within-the-play scenario. At one point, Bonifacio and the Katipuneros are amateur actors cast in the productions of Teatro Porvenir.  Then, after they launch the revolution, they become part of a much greater drama, not merely of the painful birth of a nation, but the murderous politicking behind it.

The transition from one phase to another is very nuanced, and one has to listen to the dialogue and be aware of what is happening onstage in order to follow the shift and make the necessary distinctions.

Sometimes, the undercurrent of equating art with life increases the burden in exposition, and tends to make a play didactic. Here, while the background information is interesting, too much of it slows down the first act and makes it stilted, preventing the play from devoting more time to developing our heroes’ motivations or showing deeper layers of their characters.

It is in the second act that the play shines, when all the historical information either narrated by the performers or illustrated in the production design seamlessly come together to support the events and personalities on stage. It is ironic and fitting at the same time, as this is the part where the central figures leave the confines of the Teatro Porvenir that has nurtured them, to fulfill their roles as flesh-and-blood heroes on the larger stage of Philippine history.

Rizal is allotted a dutiful spotlight near the end, without adequate preparation in the prior scenes. That bit of inconsistency aside, it still makes for a hopeful, powerful ending that overcomes the anguish in the second act.

But it is the writer Tolentino who survives the upheavals, to make his stage the vehicle for the spirits of his friends and allies to dwell in. Their immortalization in his art, and in the works of his creative descendants, only signifies that the revolution is far from over.