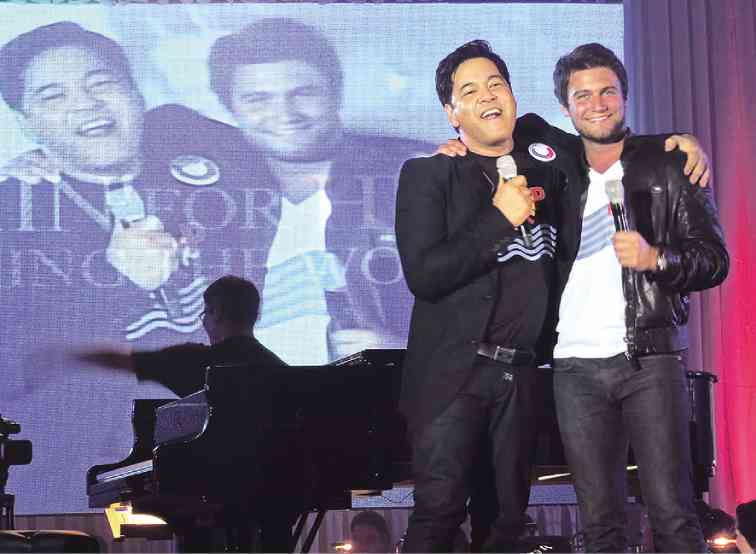 With the redeeming storm surge of Rach2, Cecile Licad lends a hand

On a recent autumn evening, as Cecile Licad was having dinner of Japanese noodle soup, vegetables and green tea cheesecake with her son Octavio and Manhattan-based author Ninotchka Rosca, we just had to ask her why she needed to practice seven to eight hours every day when she had been playing the Rachmaninoff piece almost all her adult life.

She, in fact, made her debut as a recording artist in 1984 as soloist of the Rachmaninoff Piano Concerto No. 2, with Claudio Abbado conducting the Chicago Symphony Orchestra.

“It’s sometimes harder when you are so familiar with the music,” she told us. “I have to study it again and again, to see how I can do it better, to find out things I didn’t notice before about certain parts. There is always something new I would discover—a phrase, a chord progression, a fingering—and it gets me excited, so that when I perform it again, it’s as if I am performing something different, almost like for the first time.”

Indeed, those who might have remembered the turbulent interpretation of her Rach2 in the recording, or even that one of a few years ago, would have been surprised at a recent performance of the piece. The usual heavy, dirge-like pronouncements of the opening chords of the first movement gave way to a more calibrated intensity, the flow of her emotions moderated by concentrated sparkles of technical brilliance as well as by musical profundity.

But her more introspective second movement—with barely perceptible pauses before long passages that progressed to a climax—rose from sheer lyricism into a mystical experience.  She had the audience slowly going with her into rapture, as she uncovered layer after layer of each theme.

Unafraid to rise and fall, to expose her soul, the Cecile we see nowadays no longer shields herself with the shimmer of dazzling technique. She has attributed much of her confidence to the musical bond that she only recently cultivated with conductor Gerard Salonga.

“I have so much fun working with him, it’s great. He is flexible, open and can get what I am trying to say when I do something unexpected. He doesn’t need to prove how knowledgeable he is. It’s easily give and take between the two of us, just like jamming.”

Cecile and Gerard are a magnificent team that we hope the bosses of ABS-CBN will enshrine in a recording with the ABS-CBN Orchestra.

But if there were any doubts about Licad’s immense strength, the sweeping runs ending in powerful explosions in the third movement showed us why her interpretation of Rach2 has been called “volcanic” by foreign critics.

Cecile, pounding with all her might, sounded as if the weight of her entire body had miraculously multiplied. Crisp, precise, but every outburst and sudden change of pace were but a natural build-up to the breathtaking crescendo and the forceful coda.

The passion and drama of Licad’s Rach2 was the musical equivalent of Supertyphoon “Yolanda.” You could see it racing toward you, and you thought you understood what was going on. But you could not stop it from overpowering you.

No wonder the visibly awed Lea Salonga, who had the misfortune of trying to win back the audience following Licad’s double standing ovation, could only say “She’s a freakin’ beast.”

Only Licad could come after Licad, and she captivated the audience with her encore of George Gershwin’s “Embraceable You,” a study in glissandos arranged by the virtuoso Earl Wild.

Of all the fundraising shows specially organized by Filipino artists for the Yolanda survivors, “Jammin’ for Help and Thanking the World” was top of the class for its singular achievement of drawing in from New York City the country’s most acclaimed pianist, to perform one of the world’s most dearly loved piano treasures.

We know that after witnessing on TV and social media the ruin of Central Visayas post-Yolanda, Licad immediately sent friends notice of her eagerness to contribute to relief and rehabilitation efforts.

The billing, however, had Martin Nievera, Lea Salonga and Cecile Licad (in that order), accompanied by the ABS-CBN Orchestra under its conductor Gerard Salonga. A young singer named Fitri Cerado was called to stage to do “One Voice” as images of destruction, of survival, of sharing and hope were flashed to excellent effect on the screen backdrop. She would appear later in the show to do a lovely duet of “The Prayer” with Martin.

Of course, Lea and Martin are always the main act whenever they appear onstage in Manila.

Apart from having a voice that can soar and carry listeners with it—“Corner of the Sky” was a great show-off piece—Martin has been known for his antics to reach out, including posing with members of the audience for selfies. He even did everyone another favor by calling onstage a friend named Ryan Gallagher, who was not only candy for our eyes but had an impressive capacity to sing in Tagalog.

Charm and warmth is what Lea has much of, too. Between the two singers, it is Lea who has conquered arenas that would give other performers the jitters. The discipline of years spent in the West End and on Broadway was quite obvious as she switched from the cheerful “Love Will Keep Us Together” (what could be the theme song of every crisis-battered Filipino) to more sensitive love songs.

It takes more than range and volume to give justice to a medley of songs by Legrand and the Bergmans, especially those taken from the dazzling Barbra Streisand film “Yentl.”

Lea’s life and her advocacies have given much credibility to her performance of “What Are You Doing the Rest of Your Life,” “Papa Can You Hear Me” and “Piece of Sky.” For her commitment to her talents and to her beliefs, Lea will remain much-admired. Brava!

Important mention must be made of combining the rock-pop type of video screen imaging with the performance of a concert masterpiece. We thought that lining up the flags and alternating these with “thank you” in the languages of all the 18 countries that rushed in to help our people was a splendid idea.

But the busy video images of Licad moving in the backdrop, and the bothersome time-delay of the image played back on screen, made her look like she was just accompanying a film of herself playing the piano. It had terrible impact, and the director would have been wiser to turn all attention to the music, and support the serious inner work that took place as the piece unfolded.

The audience  came to hear her play, and not to watch the visual interpretation of her playing. In fact, at a merienda held days after the concert, Cecile complained to friends that the pink and blue lights trained on the black and white keys “made it look like I was playing an instrument with 180 keys with different colors.”

Even if the direction was planned with a future TV broadcast in mind, the clash between the presence of the soloist and the larger-than-life images on the background should not have been projected.

Should Cecile continue performing in the same context again—cast in a merry mix of pop, light rock and Broadway?  With some caution, and better sequencing, it might work.

Her last few appearances in Manila have signaled a willingness to explore lighter music genres, as well as nontraditional venues and audiences. Producers must keep in mind that for a fundraiser such as this to be effective, one needs just the basics: marvelous talent, well-honed accompaniment and a willing, enthusiastic audience keen to give to a good cause.