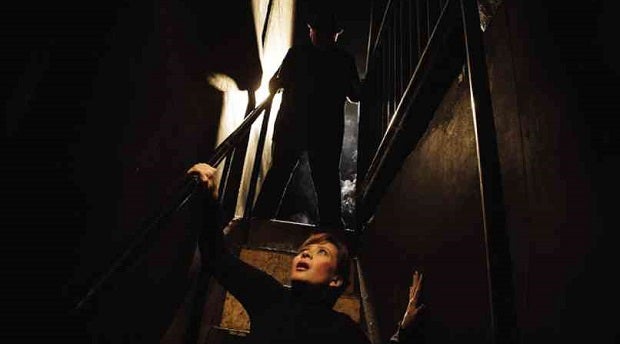 Upon entering the theater, one notices an annoying crack of light that seeps through one side of a door, glaring at the audience, on the set of Repertory Philippines’ staging of “Wait Until Dark.”

One assumes it is an ill-measured or poorly constructed frame, until the second act comes along and one realizes the clever, deliberate one-two punch of Miguel Faustmann’s set design and John Batalla’s lighting design in that shaft of light.

The title of the play specifies what will eventually engulf the characters and audiences. Faustmann’s design for this basement apartment unit provides the second hint: There is a ceiling. This blocks Batalla’s access to the battens above the stage, leaving him nowhere to hang lighting instruments to illuminate the cast from above.

The production showcases Batalla’s deft workarounds to the play’s challenges. Not only is he able to allow audiences to still see what’s going on when the literal darkness finally comes (with strategic blue washes and occasional orange spotlights), he plays with what lighting opportunities do remain.

It’s a cornucopia of techniques for audiences to experience as Batalla calibrates light intensities, colors, shapes and movement (and shadows) throughout the play to show varying interior lighting (lit from within the set) and varying outdoor light streaming into the apartment (lit from the sides of the stage).

Written by Frederick Knott, the play is about three men who attempt to con Susy Henderson (Liesl Batucan) out of a doll of great value that was given to her husband.

Knott adds poetic cruelty by giving her a photographer husband (a stern but malambing Lorenz Martinez) and a child neighbor (played straight by an effective Dani Gana) who wears eyeglasses, highlighting Susy’s blindness.

It’s been a while since Faustmann designed a set for Rep and, in this comeback where his solid sense of interior architecture is on display once more, he doesn’t make it easy for his lead character: Half of the apartment is raised, another step for poor Susy to maneuver.

Jethro Joaquin’s rich sound design provides mood-enhancing scoring as well as crucial aural cues that move the plot along: ringing phones, amplified footsteps, crashing cars—although there is mention of rain that audiences don’t hear, and the industrial roar of the Hendersons’ refrigerator is a bit much.

These production elements create a sensual, oppressive world for the story to unfold and suspense to build.

Helmed by Faustmann, the ensemble is tight and surpasses the occasionally uneven script, such as Knott allowing Susy to notice certain sounds but completely miss others (reinforced with Faustmann making Susy sometimes face who she’s talking to, assuming she can hear the direction where the voice is coming from, and sometimes facing at a tangent.)

Witnessing Susy piecing the puzzle together and turning the tables on these gents makes for a fun show. Faustmann moves things along as briskly as he can and maintains the tension, even if Knott keeps on punctuating it with scene breaks.

Robbie Guevara is funny as the comic relief conman and Joel Trinidad plays the sympathetic conman with a nervous, jumpy energy.

Originally cast to play Susy’s husband, Arnel Carrion stepped in to replace Jaime Wilson, who broke a kneecap in rehearsals, as the master plotter. His towering height and wide build have a menacing quality, but perhaps because he’d only had six days to learn the role, the character’s oiliness isn’t quite sinister yet and comes across as a bit cartoonish (on opening night, at least) instead of chilling.

The characterization still had traces of flamboyant affectation similar to his portrayal of villain Clayton (which fit the role) in Atlantis Productions’ staging of “Disney’s Tarzan” last year. A strange-looking mop-for-a-wig costume he dons at one point in the play doesn’t help, either. Otherwise, he delivers the goods.

Wilson’s injury, by the way, is a reminder of the immediacy and real-life dangers of stage fighting and falling (in the dark, no less!). While audiences may be used to close-ups and quick cuts of fight scenes in movies and TV, and while stage fighting can come across as a little hokey, the choreography is always something to be appreciated.

And this production’s action sequences seem to work. While some of the twists can be seen a mile away, audiences still gave squeals of surprise in some scenes.

Batucan slays the role of Susy with a steady, unfurling strength, a quiet vulnerability, a “blind gaze” that never falters—and stuntwoman skills, what with all the falling and tumbling she’s tasked to do. She effortlessly showcases a gamut of emotions, from giddy to terrorized, from despondent to triumphant.

She’s got the comic timing down pat, too. During a tense scene, when she announces to one of the three conmen that she has something of his in a taunting lilt, it is unexpectedly funny and cheer-inducing.