Those Who Can, Teach | Lifestyle.INQ ❮ ❯ 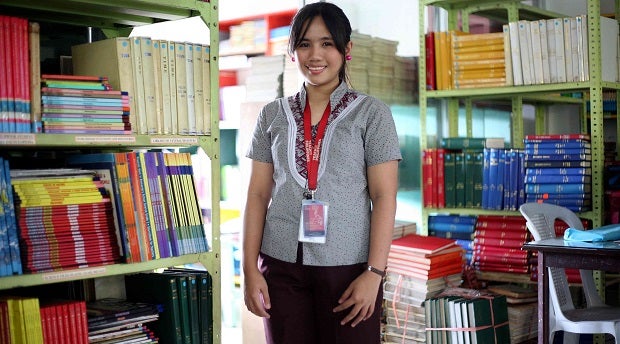 Those Who Can, Teach

The question might stump most of us for whom teaching has become a non-career, as overworked and underpaid professionals in this field quickly junk their degrees for domestic work abroad to earn more decent wages.

Fortunately, some of the country’s best and brightest don’t always think that way. In fact, some of them have given up the chance to snag high-paying jobs to go where they are needed most.

That’s exactly what Jessa Verzosa did when she shifted from teaching advanced math at a private school to teaching basic arithmetic to the public school students of Commonwealth Elementary School. “I want to give back to my country by providing quality education. A cliché, I know, but it’s true,” says the 22-year-old Verzosa, who graduated from the University of the Philippines with a degree in secondary education.

The children at Commonwealth can be makulit (annoying) and unruly at times, but this is where Verzosa believes she is most needed. Her first month handling a grade 3 class in one of the most heavily populated schools in the country was the most challenging, she admits. At one point, she even fainted on her way home, the result of her being anemic, she found out. The fainting episode was something she has never experienced in her previous teaching stints but this did not stop her from going back to the public school.

“I can’t be absent. Who will look after my students if I’m not around?” she asks, like her health isn’t a particular concern.

Verzosa is a fine example of the young volunteers who work with the non-governmental organization Teach for the Philippines (TFP), founded by Elizabeth Zobel de Ayala, Margarita Liboro Delgado and Clarissa Isabelle Delgado in 2012, based on the Teach for All network founded by Wendy Kopp in 2011. Kopp believes that promising young leaders, when given the choice, would opt for more meaningful work instead of going the corporate route. That ideal had become a worldwide movement, with TFP being the Philippine equivalent.

It is quite a leap of faith to become a TFP teacher, or fellows as they are called. Aside from deferring stints at high-paying jobs and receiving only the meager salary of a level 1 teacher, TFP volunteers go through a battery of interviews and examinations before being sent off to a nine-week TFP summer institute. The first month of teaching is done with a partner teacher. From there, the fellows dutifully work their way to earn the trust of their students.

Verzosa is one of eight TFP teaching fellows assigned to Commonwealth Elementary School, which stands next to one of the busiest highways in Metro Manila and is squeezed between a wet market and a barangay hall.

“Children here are practical,” she observes. “Some of them want to work or help their parents instead of going to school. When kids don’t see the point of why they have to learn how to read or count, they lose interest. But when they understand how counting helps their mothers in buying and selling at the market or that reading can lead to higher learning goals, they become more engaged,” she adds.

The job can be rewarding, as on those days when Verzosa can see a clear improvement in the students’ performances during examinations. But then there are days when some students bully their schoolmates—one even yelled an expletive at Verzosa.  Taken aback by the experience, she decided to delve deeper into the problem and started visiting the homes of her students. “I now understand why some of them behave the way they do. So I talked to them and their parents. In time, they changed and started to appreciate schoolwork better,” she says.

John Carlo Fernando is as determined to make a difference as a TFP fellow. Having been orphaned when he was a third grader, he is all too familiar with the challenges facing the students at Commonwealth. “But as we all know, people turn out differently. Students must work hard and teachers must motivate them. That’s why there is a need for translation, from quantity to quality,” he says.

Formerly an English and Literature teacher at UP Los Baños Rural High School, Fernando, also 22, decided to join the TFP although staying at his original post would have been far easier. “But I asked myself what else I can do. I challenged myself to teach at the primary level where students are at their formative years.”

Stanly Sy, media coordinator of TFP, says that for now, the young leaders recruited from around the country are teaching in Quezon City, but “the goal is to bring them to different parts of the country in the coming years.”

TFP has 10 partner schools spread across Quezon City, which are deemed as the most densely populated and in most need of teachers.  Their salaries are shouldered in part by the local government under QC Mayor Herbert Bautista. In due time, TFP fellows will be deployed all over the country.

To measure the impact of the fellows on their students, the TFP looks at the National Achievement Test (NAT) scores, the Philippine Informal Reading Inventory (PHIL IRI) scores, the dropout rates, completion rates and transition rates.  The NGO hopes to curb the dropout rate in public elementary schools which is pegged at 6.29 percent in 2011, according to the Department of Education.

Ysik is one of the youngest on the TFP team and has been assigned to the Krus na Ligas Elementary School.

“The subjects themselves are not hard to teach. It’s the discipline that is harder to instill in students,” she observes. Ysik conducts a reading tutorial for the slow learners and non-readers and motivates them to complete their task until they get it right.

“Eventually, the fast learners teach their classmates who need help. It was such a joy to see them helping each other—syllable by syllable, diphthong by diphthong,” she says.

Bestre, an Environmental Science graduate from Benguet State University, is finishing graduate studies at UP while teaching at the West Fairview Elementary School. “Every day is a challenge,” he says, adding that teachers like him learn as much as their students.

The 53 fellows are on their way to wrap up the first term in their two-year commitment. For sure, they will receive a “grade” of 100 percent gratitude from their students.

“After the TFP program, fellows may choose to either teach in another school or go off on another path. Whatever they choose, I’m sure they’d bring along the lessons they’ve learned at TFP,” Sy predicts.

Many of the TFP teaching fellows plan to continue working on education reform once their TFP days are done.

For Ysik, the TFP stoked her dream of building her own school in Mindanao. “In Mindanao, the way out of poverty is through education. There are few schools in our place,” she says. •

TFP is now enlisting the next batch of fellows. Visit www.teachforthephilippines.org