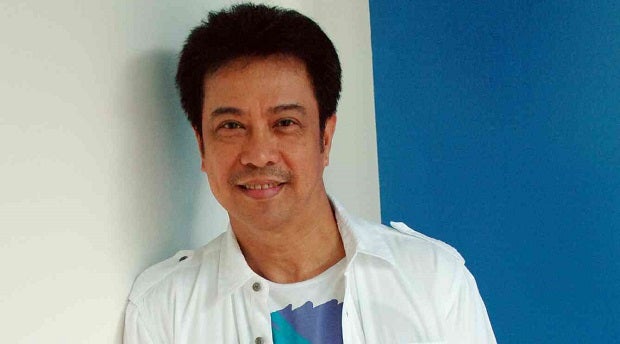 NOT YET DONE: “There are still a lot of things that I want to do.” (Inquirer Photo/Romy Homillada)

A generation ago, back in the early 1970s, he was known as the “Kilabot ng Kolehiyala” (scourge of coeds) because his singing seemed to have that uncanny power to turn demure young women from exclusive schools into a pack of shrieking banshees.   The coeds swooned over him and filled up the cavernous Folk Arts Theater during his concerts, making Hajji Alejandro a certified campus heartthrob.

The popular singer, who became one of the forerunners of OPM or original Pilipino music, started his career in an exclusive college as well.

In June 1973, the 18-year-old Management freshman at the Ateneo de Manila University took the stage at the Wells Fargo nightclub on what was then Dewey (now Roxas) Boulevard and sang “If You Don’t Know Me By Now.”

The jampacked crowd that loudly cheered his enthusiastic rendition of the Harold Melvin and the Blue Notes’ classic tune knew immediately that Angelito “Hajji” Toledo Alejandro, the youngest member of the multi-talented Circus Band, was somebody special. 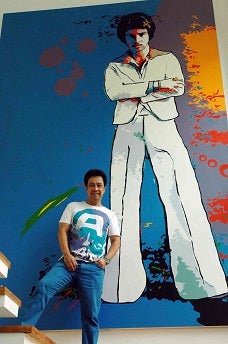 Just how special, Filipinos here and abroad continue to happily find out—40 years after Hajji became a professional singer.  Back then, he was receiving the princely sum of P35 a night, big enough to buy him a steak dinner.

The singer, who had just turned 59 in December last year, readily admits that the years of constant singing here and abroad have inevitably taken their toll. He now sings a whole note lower than he used to.

But his devoted fans who have grown up along with him do not seem to mind, if the thousands of fans who lustily sang along with him and the rest of the Circus Band and New Minstrels in three reunion concerts four months ago were any indication.

Time has definitely been kind to Hajji whose looks and build have been largely preserved, thanks to proper diet and an almost daily workout of at least 30 minutes on the treadmill.

But aside from superior genes, he attributes his much younger looks to doing what he loves most: offering the gift of song and entertainment to his loyal audience. 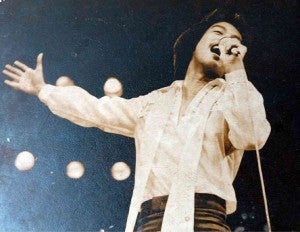 He has been singing for as long as he can remember, he says.

“My mother says I started singing almost as soon as I had started talking,” says the singer, one of two sons born to a music-minded family.

His mother comes from a big family of 12, six of whom are professional musicians, most of them playing percussions. Paquito Toledo, a popular singer in the ’50s when people flocked to the Manila Grand Opera House and Clover Theater, is an uncle.

Hajji, whose nickname comes from the song “Hajji Baba” by Nat King Cole, says his father also loved music except that he “could not carry a tune to save his life.” But the older Alejandro had rhythm and passed that on to his younger son.

It was balladeer Basil Valdez who “discovered” him, recalls Hajji, of the man who recruited him to join Circus Band after watching him perform with his classmates from San Beda during Orientation Week at the Ateneo.

“We were chosen to represent the freshman year during Orientation Week. Among the guests were Ateneo alumni like the Apo Hiking Society and Basil Valdez. Siyempre, hindi kami nagpa-dehado. We were the underdog but we got the crowd,” Hajji recounts.

“Right after (our song), Basil approached me and asked if I wanted to join Circus Band, which at that time was getting ready for a nationwide campus tour. I joined them,” says the singer who got into Circus Band almost at the same time as guitarist Rudy Lozano and the late keyboard player and composer Gerry Paraiso.

Hajji managed to balance his studies with regular weekend gigs with the Circus Band until he decided to give up after his second year in college and concentrate on his music career.  The band, one of the hottest groups at that time, had produced other great soloists, among them Jacqui Magno, the late Richard Tann, Pat Castillo, Pabs Dadivas and Tillie Moreno.

“It had always been at the back of my mind since I was a kid,” says Hajji who recorded at least four albums with the Circus Band during the almost three years he was with the group. He had been living the ’70s lifestyle complete with long hair and curfew passes since these were the martial law years as well.

Hajji literally knocked on the door of songwriter Willy Cruz, with whom he had worked as a singer for the latter’s advertising jingles, and asked for material to jumpstart his solo career.

The timing could not have been better because Cruz at that time was also about to transfer from Vicor Records to head the upstart JEM Records, which was determined to push mostly Filipino talents.

“All the pieces fell into place. Willy was offered the presidency of JEM and he was deciding at that time if he would take the offer. Then I came into the picture. Nagkatulungan kami. Nakilala ang JEM because of me and nakilala ako because of JEM (We helped each other. JEM became known because of me, and I became known because of JEM),” says Hajji, whose first solo singles were Cruz’s “Tag-Araw, Tag-ulan” (an adaptation of the Bee Gees’ “Charade” and “Panakip-butas” which used the melody of the 5th Dimension’s “The Worst That Could Happen”).

But while his career flourished, Hajji’s early marriage to a high school sweetheart floundered. The couple eventually parted ways, with Hajji taking care of his two daughters, Barney and Rachel, who would also pursue a singing career.

Back then, he had to choose between career and family. His career, just taking off at that time, won over domestic bliss.

In 1978, his career hit another milestone when he was asked to interpret the song “Kay Ganda ng Ating Musika” written and arranged by Ryan Cayabyab that eventually won the grand prize during the first Metro Manila Pop Music Festival.

The same song won the grand prize during the first International Seoul Song Festival in Korea.

“Hajji was an easy choice to interpret the entry to the prestigious contest that would also help raise (my) stature as a songwriter,” says Cayabyab who adds that the song was “tailor-made” for the singer’s voice.

“He was a matinee idol with a robust pop tenor voice when he burst into the entertainment scene. He also possessed a boyish charm and exuded a lot of confidence, his performing chops having been honed by being a member of the Circus Band,” Cayabyab adds.

“We also worked in the same recording company so it was not difficult to convince him to perform the song. It was a case of being in the right place at the right time,” says the songwriter.

Aside from “Kay Ganda…” the singer is best known for his hits, “May Minamahal” and “Nakapagtataka.”

But not even Hajji can prevent music fans from moving on to something new. Soon enough, his popularity began a slow decline. He went through such “lean times” that he eventually decided to try his luck in the United States with his second wife, the late beauty queen Rio Diaz, with whom he has a son, Ali.

“We wanted to have a fresh start,” says Hajji, who set up a restaurant with his wife along Melrose Ave. in Los Angeles where he stayed for five years, from 1987 to 1992.

But running a restaurant was no joke, he says, since he was not just a performer but also the manager and part owner.  Rio was so burned out by the pressure of running the restaurant that she packed her bags and went back to the Philippines after about three years, he adds.

She had expected Alejandro to follow her back to the Philippines but he did not, as he decided to give the restaurant a bit more support. Eventually the marriage failed as well, with Hajji left to take care of his son.

“Ang payat-payat ko noon  (I lost a lot of weight). I was just 115 pounds because I was a one-man army. I would bring Ali to school and then manage the restaurant. Doon nga sa office ko, may kuwarto na anak ko. Doon na siya gumagawa ng homework  (We had to set up a room for my son in my office where he did his homework). Then we would drive home at two  in the morning. I did that for almost two years,” he recalls.

Then the recession hit and the restaurant business was badly hit, including his. He was losing money fast and it seemed that there was no light at the end of the tunnel.

But as luck would have it, a producer from the Philippines told him that the time was right for his daughter, Rachel, to have a concert and that it would be a great idea for him to go back-to-back with his daughter.

He was hesitant to accept the offer because he had been out of the picture for five straight years, says Hajji. He thought that after all that time, people would no longer remember him. If at all, he just wanted to be a guest performer to support his daughter.

“I was so insecure,” says the normally confident singer.

But he was pleasantly surprised to learn that as soon as it was announced that he would have a concert with his daughter at the Music Museum, the tickets were sold out. That first weekend concert was an unqualified success and was followed by so many repeat concerts that Hajji eventually decided to close the business, sell his house in the US, and come back home for good in 1992.

He is now in his longest relationship so far, 15 years with former New Minstrels singer Alynna, and has no regrets over that decision to stay.

He still keeps a busy schedule, with requests to hold concerts for people who are happy to hear the same old songs over and over again.

Not bad for a singer who, when he was just starting, was dismissed as a short-term act by a fortune-teller who said he would only be around in the entertainment scene for 10 years max.

Hajji has proven her wrong, and wants to prove it again and again. “I am not yet done,” he says. “There are still a lot of things that I want to do.” •