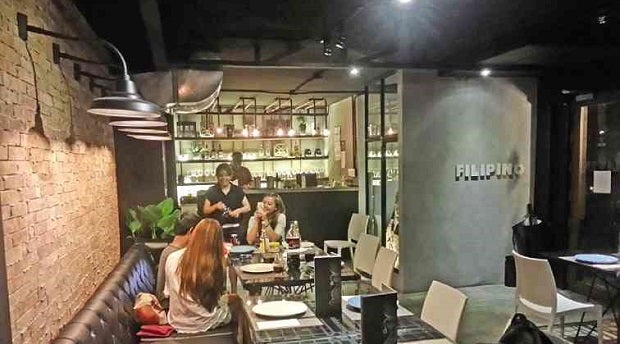 Though we grew up in Malabon, we were actually born in Quezon City, back when St. Luke’s hospital was still run by American missionaries in the 1960s.

Not far from the hospital is Tomas Morato Avenue, gateway to QC’s Timog, Scout and Project areas that throb with the energy of kids and adults spending their night out.

Among the new restaurants worth trying out is Tiago (85 Scout Fuentebella near Morato Avenue), run by husband and wife David John (DJ) and Sigrid Buendia. Named after the couple’s first-born, Santiago, the resto describes itself as “Progressive Filipino Cuisine.”

Its adobo consists of smoked boneless chicken and marinated pork trotter, which DJ recommends as “good for the skin and nails, sabi ng lola ko.” We have a hard time slicing the pork ligaments, but they’re tasty. The smoked chicken goes well with red wine.

The cool ambiance is accentuated by piped-in folk-rock music such as Bob Dylan, Crosby, Stills, Nash and Young, America, even Alan Parsons Project.

“My mom turned me on to those songs,” DJ tells us as he savors his San Mig Light.

The Italian restaurant Bellissimo owned by actor Cesar Montano has moved to a new location (135 Sct. Rallos), but still serves good pasta and pizza. The place is adorned with various paintings, some of which are by Cesar who dabbles in visual arts.

But he’s also a musician, so Bellissimo features live acoustic acts from Thursday to Sunday. Whenever he’s around, Cesar jams onstage, of course.

There are also four nice places where friends can drink while listening to records.

The restaurant’s specialty is actually pork: a sign, “Kapalmuks Express” or deep-fried pisngi ng baboy, advertised on its façade. The serving is too large for us to order; besides, the grilled squid with specially made sauce is delectable enough.

The Malt Room (26 Tomas Morato near ABS-CBN) resembles a hotel lounge, which is not off the mark since it’s at the basement of Hotel Rembrandt.

The Malt Room has an extensive drinks list, including 24 kinds of imported beer. For pulutan, the mixed sausage is highly recommended.

East of St. Louis (42 Sgt. Esguerra St. across ABS-CBN) is another great nightspot for jazz lovers. It’s been around for more than 20 odd years, the place where the likes of Angelo Castro Jr. and his buddies used to hang out.

But we think the place is too dimly lighted and smells musty.

In contrast, Dragon (Roces Avenue off Morato) percolates with dance music and kids in their 20s huddling and drinking in groups on a Saturday night.

Initially describing itself as a bistro, but later evolving as a dance club, Dragon is composed of two areas—a large room where a DJ spins the latest dance tunes, and an adjacent non-airconditoned bar and grill where the party people chill out when they’re exhausted.

The cigarette smoke and party-till-dawn vibe inside the dance hall may cause inconvenience to hypertensive 50-year-olds who enjoy the music but can’t stay beyond midnight.

Across Edsa in Project 2 is ’70s Bistro (46 Anonas St.), a place we’ve written about a couple of times, but should be mentioned again because it features live acts worth discovering.

We’re talking about Kai Honasan, a young singer-songwriter who performs original compositions while engaging the crowd in humorous banter. She’s a charming presence, and the fact that her talent extends to playing the ukulele is a wonderful thing to behold.

The songs she played the night we checked her out, including “Go,” “Liwanag” (from the musical “Rock Supremo”), “This City” and “Tongue-Tied” are so lovely and filled with heartfelt sensibilities that those thirsting for new Filipino music should grab her CD as soon as it comes out this March.

There’s a lot more bars and clubs in QC than space would allow for now.