Valentine’s double-treat: Great steak and the wines to go with it | Inquirer Lifestyle ❮ ❯ 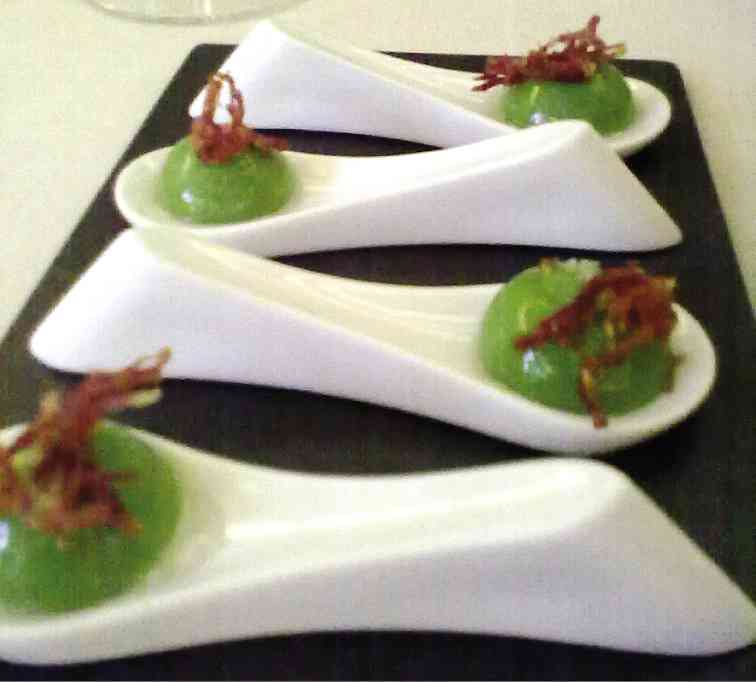 Valentine’s double-treat: Great steak and the wines to go with it

The perfect time to be at The Strip Steakhouse at Solaire Resort and Casino (Aseana Ave., Parañaque) is just before the sun goes down. If the weather condition is just right, the sun turns to red orange like a huge salted egg yolk. It’s better to watch it disappear with wine in hand from a bottle taken from The Strip’s wine wall, a stack of bottles lying horizontal in a glass cage. You imagine your wine waiter going up the ladder just to secure your order. (For inquiries and reservations: tel. 888-8888)

The wine to watch the sunset with was an Ampelidae Armance B. Gerald Savigny, wine manager, introduced this sparkling from a relatively small organic vineyard in the Loire. It was refreshingly light, a bit acidic, but it got us through beautifully through three courses.

As soon as I saw the green pea sphere, a blob on top of Chinese soup spoons with crushed ham on top, I surmised that we had a Ferran Adria devotee in the kitchen.

Chef Trevor MacLeod gave us a molecular gastronomy dinner. The tomato salad with goat’s cheese had dried olive oil, the latter a scientific experiment that reduces an ingredient to powder. And then what looked like mixed fruits and nuts was made interesting with foie gras transformed to a mousse but cut into pieces. It was a crunchy rich bread topping.

For our next courses, Savigny introduced the Domaine Mittnacht Pinot Noir 2011 from Alsace. Like the pinot noir in that region, the color is lighter and the taste proved thinner. It was paired with seared tuna served with blood orange sponge, watermelon and a crust of siling labuyo (bird’s eye chili). The pinot noir lasted through the pork belly that was beer-braised accompanied with a spot of tomato relish.

The steak came but not in the form that we know. It was placed in a jar but wasn’t visible because of the smoke that enveloped it. When the jar was opened the fog inside and the aroma were released showing slices instead of a whole piece. The sauce béarnaise was in a little sauce pot and, to one side, a 2-inch bone with its marrow waiting to be scooped out. It was drama, all right, smoke and marrow with an excellent sauce béarnaise.

And that was paired with Chateau Le Gay 2007, a full-bodied Bordeaux wine with a superior rating from wine experts such as Jancis Robinson, editor of the Oxford Companion to Wine.

It was the wine we ended the dinner with, through two desserts—a chocolate mousse with orange confit and a torched banana served with caramel sand, and you can guess that the sand by now is only what it looks like.

Savigny looked especially perky that evening because he was getting married during this month of “love.” Valentine must be in the air because another wine personality who visited declared that he was on his honeymoon.

At Spiral’s La Veranda, Sofitel Philippine Plaza, Etienne Hugel, a 12th-generation member of the Hugel & Fils winery in Alsace, enthusiastically introduced his Japanese wife of four months, Kaoru, who was wine sommelier for about seven years at an upscale Tokyo hotel.

If Hugel has four centuries of history (it was founded in 1639), I have my own short history of tasting wines. The first Riesling and Gewurztraminer I had was from Hugel. I remember the refreshing and the slight acidic taste in the mouth as well as its distinctive long green bottles with yellow labels. Hugel & Fils is available at Wine Story outlets (www.winestory.com.ph).

To put the winery in perspective, Hugel showed photographs of his Alsace hometown, the old structures that have lasted through centuries including his place of residence, the vineyards and his family. Alsace he described as located in the northern part of France, its climate the driest among French regions which allows the grapes to slowly ripen and the centuries-old houses to stay intact.

We went from wine to wine that evening, starting with Gentil 2012, a mix of several grapes—Sylvanner, Pinot Blac, Pinot Gris, Riesling, Gewurztraminer and Muscat—a good introduction to the region’s varieties. And so we proceeded to the main event which pairs the wines with food, again, suggestions from the chef from the Spiral buffet stations. The fruity and dry Riesling 2011 combined well with Japanese sushi. We thought we found our perfect white until the Riesling Jubilee 2007 was poured, “Jubilee” being the highest quality because it grows in the grand cru area (best quality place) of the estate. The Pinot Gris 2009 proved to be another alternative for my white-wine-loving friends; it smelled of fruits and flowers, had more body and tasted good with roasted poultry.

A Pinot Noir Jubilee 2008, a rare red in the Alsace region, didn’t live up to the white wines so that Etienne Hugel said the British would say the wine was “interesting, which means not very interesting.” So we switched to the whites that remained in our glasses. Thankfully, the Gewurztraminer VT 2006 was up next, paired with the ending food of blue cheese and bibingka, the drink more full-bodied, floral and dry.

And while all the wine-tasting brings us to the place through our palate, armchair travels are better with some visuals. “Fork in the Road,” a television special, brings viewers on a tour of Spain through Barcelona, Madrid, Bilbao and San Sebastian with chef Myrna Segismundo as host. A preview showed a big group of foodies visiting tapas bars and restaurants, olive groves and saffron fields and museums. The two-part series starts Feb. 16, 9:30 p.m., on Lifestyle Channel and the second episode is on Feb. 23, same time.