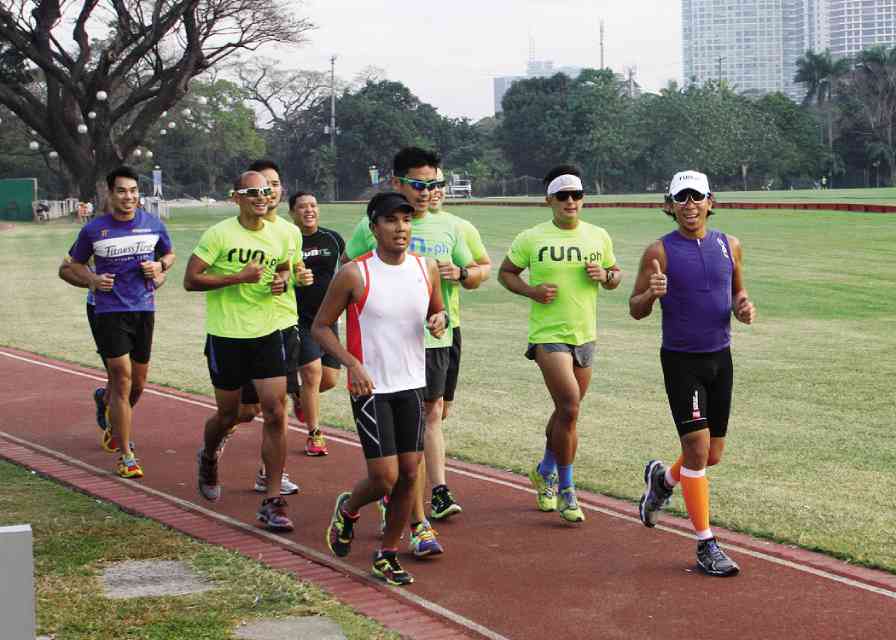 After two close calls, Kim Atienza has become a ‘spiritual Ironman,’ too

He survived a stroke and a devastating muscle disorder. Still, you can’t wipe the smile off ebullient TV host and triathlete Kim Atienza’s face.

“I’m happy because I’m physically and spiritually fit!” he exclaimed.

On a Tuesday morning, Atienza, fondly called Kuya Kim, had just finished a 10-kilometer interval training with his running buddies around a Makati field.

A few weeks ago, he joined 711 Run, a 21-km marathon, along the Manila-Cavite Expressway or Cavitex. Stretching his hamstrings and calves, Atienza said he was satisfied with the 1:48 record, despite the fact that he was stricken with Guillain-Barré Syndrome (GBS) a few months earlier.

GBS happens when the immune system erroneously assails part of the nervous system. This results in nerve inflammation that leads to paralysis and other infections.

“At first, I thought it was training-related. I had just done six hours of biking. The next day, I could not move my left hand. Being a stroke survivor, I went to my neurologist and asked if it had something to do with the stroke. He said it’s the handlebar syndrome (numbness in the hands due to overuse). It would be gone in a few days.

“After three days, both hands were still numb. Still, I worked out for 30 km and then I swam even if I could not move my hands. A week after, I could not move my feet. My wife rushed me to the hospital. When the doctor tested me, he said “if you delayed this by one day, we’d have to intubate you (place a tube into the windpipe),” recalled Atienza.

He stayed in the intensive care unit for a week.

An optimist, Atienza said the crisis became an opportunity for him to be more reflective. “It turned out to be the best thing that happened to me. Though I was not able to do my Ironman last year, I became a spiritual Ironman. It strengthened my relationship with my Lord.

“It’s embarrassing to admit that you run to the Lord when you have nothing. I was paralyzed; I could not use my hands and feet. Yesterday I was Ironman, then today I was paralyzed. But in four days, I got everything back. I researched that most survivors had to relearn how to swallow or walk,” he said.

Atienza couldn’t be more content with a work-exercise-family life balance.

He wakes up at 5 a.m. to have breakfast with his wife Felicia. On Mondays and Wednesdays, he bikes for 40 km, followed by a swim.

Every Tuesday and Thursday, he engages in tempo and interval runs with a group. “On a 10-km run, you increase your pain threshold,” he said.

He runs with Team Gotta (as in “I gotta do this!”), a group of novices who were determined to do their personal best. Atienza explained that Gotta is an acronym for “Gwapong Trying to be Athletes,” coined by celebrity restaurateur Erwan Heussaff.

After a quick breakfast, he swims for two kilometers. A confessed late bloomer, Atienza learned how to swim only three years ago after training in running and biking. Atienza and his running buddy, Gilbert Remulla, challenged themselves by signing up for Ironman 70.3 in Cebu in 2011 without any swimming experience.

To discipline himself in the water sport, the TV anchor announced on his Twitter and Facebook accounts that he and Remulla had signed up for Ironman. Atienza couldn’t even do one lap in the pool. After intense coaching and practice, he could easily swim for four kilometers.

“Swimming is my personal time. I think of my family. I pray. The long, slow runs are also meditative,” he said.

On Fridays, Atienza would go to Alabang and embark on a 100-km round-trip bike route to Naic, Cavite.

Done by midmorning, he arrives in ABS-CBN on schedule for “Showtime.”  After the show, he takes a 30-minute nap to refresh his brain in a condo near the TV station. Before sunset, Atienza is then ready for “TV Patrol.”

Atienza is home before 8 p.m. to enjoy dinner with his wife and children. At 10 p.m., the household is asleep. “I’m done with my unwholesome years. Recovery is important, that’s why I need seven hours of sleep and a nap in between,” he said. The adequate sleep not only boosts his athletic performance but more so his well-being.

For his diet, Atienza chooses food according to glycemic index (a count on carbohydrates in food and their effect on blood sugar.) “I eat like a diabetic even if I’m not.” He favors brown rice, vegetables and meat. “I eat a lot without getting fat,” he said.

Since his childhood, his mother and nannies prepared tasty vegetable meals. “My mom was an herbal advocate. All the kids grew up with malunggay. My mom put malunggay in tinola and monggo.” With his mother, Evelina, and sister Angela, they formulated and packaged moringa products under the Atienza Naturale brand.

In his younger years, Atienza pumped iron at Clark Hatch Fitness Center and took aerobics with Vicki Belo, way before she became the celebrity doktora. He evolved into a co-host with trainer Ana Unson in a TV show, “Muscles in Motion.”

“It made history because I was the first male ever to wear Lycra,” said Atienza.

Then again, Atienza was a dancer with the Manila Metropolis Ballet under the tutelage of no less than the late choreographers Tony Fabella and Eddie Elejar. His father, former Cabinet member Jose “Lito” Atienza, and his mother were contemporaries of Fabella and Elejar in Bayanihan.

At the height of the gym craze, the 5’8” Atienza bulked up to 190 lbs. However, fitness took a back seat after marriage and television. A few years ago, Atienza suffered a stroke, attributed to patent foramen ovale, a hole in the heart that didn’t close properly after birth.

“I let go because I thought that all the fitness I had in the ’80s and ’90s would carry me through,” said Atienza. “The stroke hit my left brain lobe and made me lose my speech and memory. I got scared. The doctor advised me to get into brisk walking for 30 minutes every day.”

Atienza would walk around the Manila Polo Club until he spotted coach Miguel Lopez, who was running with a group. Intrigued by the gracefulness of the runners, Atienza approached Lopez to teach him the correct running form. Soon, Atienza’s  runs gained speed until he got into biking and swimming.

With all the aerobic sports, Atienza  lost 25 lbs and four inches from his waist. Looking younger than 47 years old, Atienza weighs 150 lbs and has a 30-inch waistline. This year, he is girding for the half-Ironman in Kona, Hawaii, and the Ironman in Western Australia.

“I’m a late-bloomer in triathlon. I have no regrets. I’m okay for my age group,” he said. “I don’t do this for the looks. That’s just a bonus. I like the training part. The races are icing on the cake. When you’re fit, you have a big reservoir of energy.”