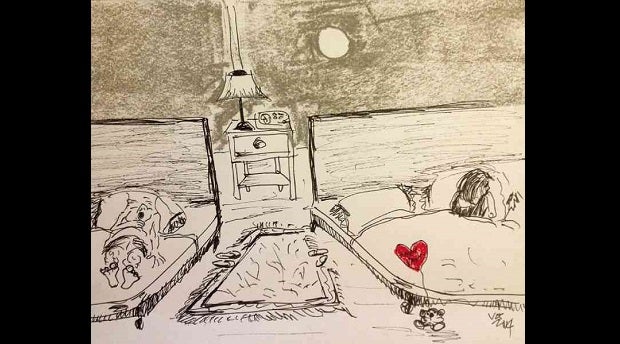 When things go right, they can be just too marvelous for words.

Bumping into old friends Celia and Rene Barrientos (with their widower neighbor Dr. Clipper Lorenzo, another old friend) at the same Italian restaurant for Sunday breakfast was getting too regular to mean nothing. My husband Vergel has such a thing about “patterns revealed in nature”—about “everything being eventual,” as he had in fact mused about in this section only last Sunday—that I knew he would not let it go without finding some meaning to it.

Each time we saw Celia and Rene, we stopped at their table for a brief chat. Serendipitously taking some signal from somewhere, I decided to include them as subjects for a Valentine’s feature I was working on for a new subsection here called “Other Voices.” The reciprocation was itself all too natural.

Having met only a few days before, by absolute chance, Vergel’s brother Lito and his wife, who were visiting from the States, they invited all four of us for dinner at their home.

Celia cooked paella, salpicado and baked fish, and prepared a light dessert of thoughtfully sugar-free ice cream. It turned out to be a feast too much for only three hungry guests, Clipper and us, since my brother-in-law and his wife couldn’t make it.

But just as well: Celia had a take-home pan for ready-to-reheat paella, complete with instructions to ensure it came out as good reheated as the original.

Before the evening was over, Celia handed us a Valentine gift: two coupons for an overnight stay in a suite at the Malarayat Golf and Country Club resort in Lipa, Batangas. As if it was not enough, it came with a special Valentine dinner show, with the famed Billy King as guest chef and Vergel’s very own son, Paolo, serenading!

Celia and Rene had no need for the two coupons entitling them to a free stay every year at the resort hotel as club members: They own a farm home nearby. Also, this time they were visiting their daughter Bettina and her British husband and their children in London.

After wife Bon died, years and years ago, Clipper, for his part, seems loyally resigned to forever have no other Valentine, especially with a protective granddaughter who kept checking on him by cell phone from home throughout the dinner—they live on the same block.

I couldn’t wait to tell my BFF Bea Bantug-Tan and her husband, Ric, about our great luck. They are not only members of the club themselves but also have a weekend home there we hadn’t seen. Well, that night, we finally saw and, as friends who had seen had guaranteed, were impressed—by the paintings, the antiques, and not to say the house itself and its appointments.

We dropped in for wine and some paté, cheeses and angulas in garlic and olive oil before the dinner-show. With Ric’s golf mates and their wives, and cousin Ninit, we formed a table of 11, rounded to a full dozen when Jiji, Paolo’s wife, joined us listening.

The dinner, from appetizer to dessert, was superb. But I expected no less from Billy King of the Soufflé. And the show, as biased as I am, was, to use Ric’s own words as he shook Paolo’s hand afterward, “First-class!”

The weather cool, made nippy by a breeze, I needed to borrow a shawl from Bea. And the moon, as Cupid would have it on his day, was going full. The suite gave us a panoramic view of its fullness above the nearby mountains.

In the room were two king-size beds waiting, affording us the space we don’t have in our shared queen-size at home, and the freedom from Valentine pressures with the promise of a good unencumbered night’s sleep.

Alone but not lonely in bed, my naughty thoughts of a full moon and king-size beds were suddenly interrupted by the memory of an experience in Lipa in February 1949, a few months after the last apparition, the November before, of Blessed Mary, the Mediatrix of all Grace, to my namesake,

Sr. Teresita Castillo. It was a special request for my ninth birthday my parents could not refuse.

Dad drove us—Mom, my brother and me. But no rose petal shower occurred that day. As we drove home after Mass at the Carmelite church, we hit a rather large rock on the road. Our car spun and overturned several times before a tree stopped it.

The car, resting on its roof, was so badly damaged that survival in this pre-seatbelt era would look a poor prospect. All four of us, in fact, had been thrown out of the car; how, we didn’t know.

Kind strangers took us to a hospital. My four-year-old brother suffered a little head cut, but the rest of us were only slightly bruised. It took years for me to recognize, on looking back, our own little miracle, and be grateful.

The next morning, after breakfast at the Tans, Vergel and I decided to pass by the cathedral on our way home to pay homage to the Lady of Lipa for some sort of thankful closure, after 65 years. It couldn’t have come at a better time.

It was, as it happened, also a Valentine to be grateful for, and remember.