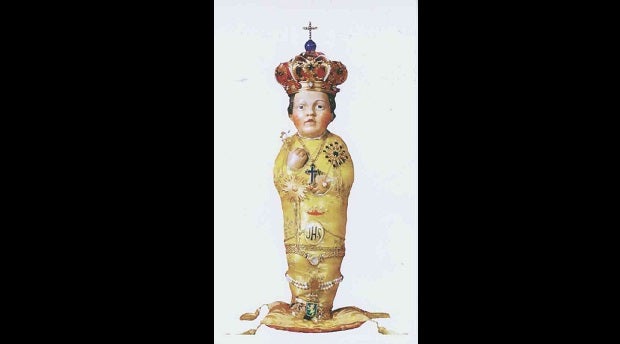 SANTO Bambino de Aracoeli, most loved Holy Child in Rome and in the Catholic world

Thanks to the late Dr. Romeo Echauz, I developed a devotion to the Bambino de Aracoeli, who is much loved in Rome and in the Catholic world. When he was still alive, the good doctor would invite friends and family to the Holy Mass honoring the Holy Child in the Sto. Bambino Chapel in the Filipinas Paradise Complex in Naic, Cavite. It was on May 2, 1897, when Pope Leo XIII crowned the Holy Child in the chapel on Capitoline Hill in Rome.

This statue, dating back to the end of the 15th century, is a carving made from an olive tree from Gethsemane in Jerusalem by a pious Franciscan friar. According to tradition, the friar did not have the necessary paints to complete his work and so it was miraculously completed by an angel.

During his return trip to Rome, a severe storm on the sea forced him to throw  the precious treasure into the water, but its case arrived at the port of Livorno by itself in the wake of the ship.

Preceded by the fame of unusual miracles, the holy image was received with great joy in the Eternal City and was accorded special veneration. One day during the Christmas season, while the Bambino was lying in the crib, a Roman noble matron stole the statue and carefully hid it in her home. However, becoming gravely ill, she was obliged by her confessor to return the statue. A popular tradition has it that the statue left her house by itself during the night and returned to its place on the Campidoglio, as the bells of the basilica rang joyously announcing the miracle.

Rich gifts of gold and precious stones give witness to the gratitude of the faithful for the innumerable graces received. These gifts were always furnished abundantly whenever the statue was sacrilegiously despoiled.

In 1798, a noble Roman citizen, Serafin Petraca, saved the statue from being burned by the troops of Napoleon by paying a huge ransom.

The chapel of the Holy Bambino is visited by pilgrims from all parts of the world. Mothers, before giving birth, visit Aracoeli to receive a special blessing. Later they bring their children to be consecrated to the Divine Bambino. He has been carried to the sickbed of the faithful and oftentimes one could see in the Campidoglio Square a long line of carriages awaiting their turn.

To commemorate the 22nd death anniversary of Msgr. Aloysius Schwartz on March 16, a photo competition has been launched having the theme “Capturing Father Al in the Heart of the Poor.”

Deadline for submission of entries is Feb. 28. It is open to the Sisters of Mary family and friends from around the world, either amateur, emerging or established photographers, to promote the life and works of charity of Schwartz, founder of two religious congregations: Sisters of Mary and Brothers of Christ. The process for his beatification is underway in Rome.

The Peñafrancia Devotees Association of Metro Manila will be holding its Medical-Dental Mission today at San Miguel Elementary School in Bulacan. For 30 years now, the group has been holding the missions, which carry the loving message of the Virgin of Peñafrancia.

The Missionaries of Mary (MOM), a lay Marian community, will conduct a Marian Lenten seminar March 2, 8 a.m.-5 p.m., at Tan Yan Kee Student Center of the University of Santo Tomas. Theme is Living the Spirit of Lent in the Marian Way.

Topics: Protoevangelium, Mary as Co-Redemptrix and Seven Sorrows of Mary.

Our Lady of Medjugorje Prayer Group of Queen’s Row, Bacoor, Cavite, tirelessly prays 2,000 Hail Mary’s every first Saturday of the month, for the sake of people in urgent need of physical healing, financial assistance, approval of visas and reconciliation with broken families. Those whose prayers have been answered are invited to attend the March 1 praying session at the house of Lita Holtz on Queen Mary Road in East Queen’s Row, Bacoor.

The Franciscan Conventuals in the Philippines will turn over the holy relic of the bone of San Sebastian to the Augustinian Recollects during a concelebrated Mass on Feb. 27, 10 a.m., at Basilica Minore Shrine in Quiapo.