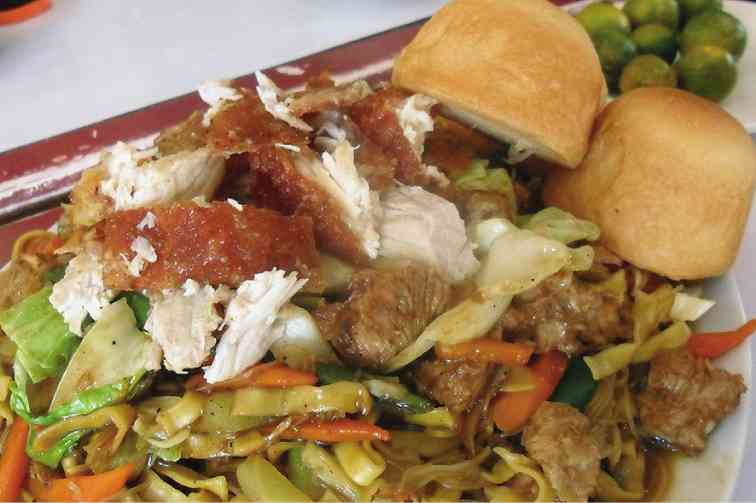 PANCIT miki with pan bonete at Casa Moderna in Naga

Eating our way through Naga

It wasn’t even lunch yet but the pancit miki served was too inviting. There were lechon pieces on top, with the texture and the taste very much like roasted pig, but those were really lechon kawali, fried pork belly in oil.

That was what our hosts—Charmaine Madrid, her mother Lourdes and her aunt Teresita Rada Veluz—told us. We were at the family bakery called Casa Moderna in Naga City, Bicol, where they let us watch how their pan bonete was done, the bread they are known for in the city and which serves as partner to the different pancit the place is also known for.

Bonete in many parts of the country is shaped like a mushroom with the stem long or short or hardly there. At Casa Moderna, we saw how the dough was shaped into balls then a mold shaped like a cone encased each ball. When the bread is baked, the dough expands going through the hole on top to create that mushroom shape.

Yet another pancit made its way to our table, a palabok this time. It also had the lechon on top. One pancit order is too much for one person but customers dining alone ordered them anyway with the requisite pan bonete.

What is it about Bicol that pancit seems to be an important part of their menu? Consider the pancit kinalas, a Naga specialty that is similar to the mami except for its orange sauce with super tender meat and where the name supposedly comes from—kalas, for meat falling off.  Unfortunately that wasn’t tasted because we only had one day there. And then the pancit bato from Bato, Camarines Sur, noodles made from cassava flavored with a combination of soy, vinegar, fish sauce and pepper as described by Ofelia Abay, who won third place in the 2012 DGF Food Writing Award.

Because we had an early lunch, we had to have merienda. On the wall beside the tables, it said “tsokolate with cheese in a pan Legazpi,” which is a favorite snack at the Ruvivar Quality Café, said Rhea Ruvivar. The bread is like monay, a thick loaf with a slit on top, and the chocolate drink was pure with the right thickness and its sweetness tempered.

A second merienda was another noodle dish at the Naga Garden Restaurant, mami paired with toasted siopao. The first sip of the broth convinced me that the particular mami flavor was similar to that of Ma Mon Luk and of Masuki, and which, up to now, is one of the mysteries I haven’t unraveled. The toasted siopao, on the other hand, has become known throughout the country as an invention that came from Naga. The dough becomes hardened because of the toasting and I suppose lasts longer than the steamed kind. The owners, Marvin and Margarita Penas, were kind enough to trace the history of their restaurant, a place packed that afternoon with both locals and visitors like us, both eager to have Naga specialties.

I had told a Bicolana friend that I was visiting her province and she asked me to go try her restaurant, Bigg’s Diner. There was no time to do so in Naga, and so it was in Legazpi when we entered the branch, one of many in the Bicol and extending up to Batangas. Our place mat gave the restaurant’s history.

My friend, Nena Centenera Bichara, with two amigas (Nienie Buenaflor and Maricor Manjon) were the founders. The business was first named Mang Donald’s, which got them into trouble with a big international company because they sold hamburgers to go. They changed the name to Carl’s Diner that eventually became Bigg’s.

On the menu were mostly diner food like fried chicken and ribs and salpicao. Because we were missing Bicol cooking, we had laing on the side. One of us was lucky to have pinangat (packets of taro with stuffing) with the daing na bangus.

Our Bicol fix was at Waway’s, a buffet place recommended by food guides. That evening it had Bicol Express, the popular name of gulay na lada (chili in coconut milk), picadillo (tilapia

What is it with eat-all-you-can places in Legazpi? There were many signs that offered more than reasonable rates for so many choices. Just before flying out to Manila, we decided to eat at the Legazpi Airport. It was crowded, with live music even. The food was quite tasty, especially the menudo, humba, and even the sayote in coconut milk. I guessed that not everyone there was leaving that day but just wanted to indulge themselves with good cooking at a bargain price.

But when we wanted to get pinangat to take home, we had to go to Camalig, 30 minutes from Legazpi. We went to Dad’s on the highway where we saw the gabi packets crowding the dining area. The staff was packing frozen pinangat for a trip to Manila supermarkets so at least I know where to get them.

The other reason for that trip was to visit exceptional specialists I had met five years ago—Bernardita Marques Martillano who made marcasotes, and the Maravillas sisters, Jo and Jierna, who did unforgettable suspiros de pili.

Marcasotes is a kind of cake or bread that looks like an Italian panettone because it is cooked in a brown paper bag. Like the bonete, the top mushrooms into a concave shape when cooked. It has eggs and flour mixed together, poured into the bag then is steamed in a big clay pot lined with pounded saba banana stalks that provide the steam. Marcasotes is now served for special events, but in the old days, it was served daily on the breakfast and merienda tables.

Pili is Bicol’s celebrated nut, used in many of their sweets. The Maravillas sisters taught me how to make suspiros, slow-cooking the pili mixed with sugar and milk then placed into small square containers made from bond paper. How sad that Jierna died and that Jo is just recovering from a stroke. The business closed for a while but the younger generation in the family revived it and retained the excellent quality, pure pili goodness.