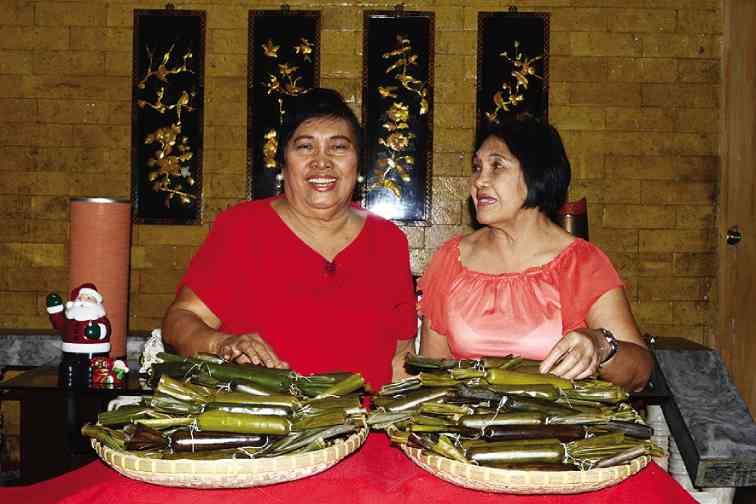 A funny thing happened in our search for moron in post-“Yolanda” Tacloban. We found it when we got back to Cagayan de Oro, but we’re getting ahead of our story.

Moron, of course, is Tacloban’s famous pasalubong. It’s a glorious chocolaty kakanin wrapped in the usual banana leaf and shaped like a sinful, promising bulge. (Tacloban’s other delicacy is the binagol, smoother and multitextured stepsister to Bohol’s sometimes stubbornly gummy calamay.)

During her reign at Malacañang Palace, Imelda Marcos would call up her suki in Tacloban whenever she felt like having a nostalgic taste of her childhood, and order dozens of moron for rush delivery to the capital.

“Meldy would tell Tia Bebe on the phone that she was hosting VIPs from Russia and she wanted to give them a special treat,” confided Norma de Veyra-Oledan. “And so Tia Bebeng would call on us and we would work right away on hundreds of moron for her.”

In Tacloban and the neighboring towns of Palo, Tanauan, Tolosa (where Imelda grew up), Dulag, Majorca, and Abuyog, moron has always been the currency of goodwill.

“From fiestas to birthdays to wakes, a party is not complete without moron,” attested Linda de Veyra-Cabrera, Norma’s sister.

She said the moron is not merely to be consumed at the party—it is also a takeaway goodie visitors expect to take on their way out.

“That’s why we would prepare a lot of moron,” said Linda. “During fiestas, we would use about three gantas of malagkit and rice. People would remember how delicious our moron was for many, many years afterward. You could say that our social bond hinged on moron diplomacy.”

Linda and Norma’s mother was Choleng, who ruled the kitchen with prescience.

“She would rouse everyone to help out in preparing the moron three days before the fiesta,” Linda recalled.

But then again, unlike the usual kakanin where you just mix steamed malagkit into a simmering brew of coconut milk, the moron is a painstaking “labor of love,” as Linda put it.

There is the matter of handpicking the cacao to ensure topnotch quality. Then you roast the cacao until it basks in that optimum aroma. And then you grind it.

While all this is going on, you have to soak the malagkit in water before grinding it.

There’s the business of the coconut milk, too, which has to be prepared fresh, or else.

All that—plus the cooking. And the elaborate final touch.

“The secret of a good moron is the balance of the chocolate mixture and the white coating mixture so that you get just the perfect play of textures,” said Norma.

Norma cooked a lot of moron on Independence Street in Tacloban City, raising a family of professionals. It was a nice residential area, a stone’s throw from the sea. When the storm surge hit during Supertyphoon Yolanda last year, her house was washed away.

A relative, who happened to be a priest, got in touch with Linda, now living in Cagayan de Oro, and told her that her sister’s house was gone.

“I panicked,” Linda said. “I sent my family in a van to look for her and her family.”

From Cagayan de Oro, the van went to Surigao City, hopping on a ferry to Southern Leyte, and then off to the supertyphoon’s ground zero.

“Ours was one of those old wooden houses, very spacious, and with many rooms,” said Norma. “I had many boarders, mostly male students. They saved me and my family.”

Norma spent Christmas at Linda’s house in Patag, Cagayan de Oro. And there they made moron for the holidays.

“Our friends loved it,” beamed Linda’s daughter Jovette, who works for Philippine Airlines.

When Jovette’s father Jack was alive, he used to prod Linda to make moron for his colleagues and even Manila-based bosses.

“It was some kind of a test of my identity,” Linda said. “I’m from Dulag and I must know how to make the best moron. I have a feeling I won over my in-laws with my moron.”

But Linda, who was also a government employee, did not pursue the moron as a business.

With nothing to go back to in Tacloban, Norma has decided to stay in Cagayan de Oro with her sister Linda.

“We’ve decided to open the moron business here,” said Linda’s son Jonathan. Using his marketing and entrepreneurial savvy honed over the years in Australia, where he is based, Jonathan banded his siblings—Joy, Jojo, Jovette, Jeffrey and Jeremy—into a food business venture. They are naming their product “Nanay Choleng’s Chokoleit Muron.”

The family has even organized unemployed women in the neighborhood to train them for this project.

“We may be retirees,” Linda declared, “but I believe it is never too late to be entrepreneurial.”

Quipped Norma, “Besides, the coconut industry in Tacloban has been wiped out. How can one make moron there without that basic ingredient?”

That we can attest to. When our gang went to Tacloban during the Christmas break as part of the Cagayan de Oro Multi-Sectoral Engagement for Tabang Visayas, we could hardly find any moron.

Well, Tacloban’s moron apparently lives on—a burst of gritty chocolate goodness (spiked with peanuts and cheese and butter and anise and whatnots) melting in your mouth even as it evokes memories of sea-washed hometowns and long-ago childhoods and the good Imeldific days of old.

Except that this time around, it’s called muron (yes, with a “u”), and the family blessed with this heritage recipe is leaving the devastation behind. And, with your help, they can move forward.