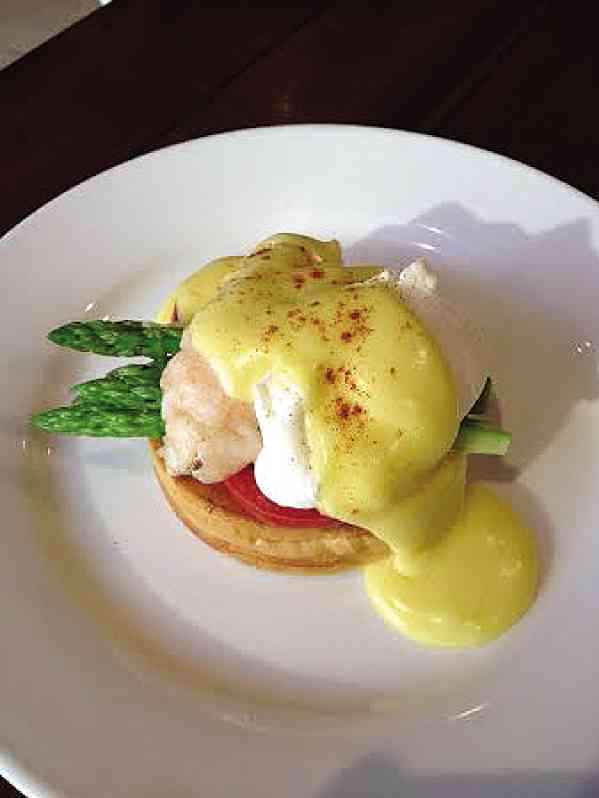 Lobster Benedict–a breakfast dish to fall in love with

Chef Robby Goco has got his finger on the pulse of the country’s bustling food scene. His restaurants always leave an impression and become much talked about—from Tequila Joe’s and Cyma, to Charlie’s Grind and Grill, Achiote and, most recently, Green Pastures. He gets things right and seems to know what the people want.

It’s no different when he’s at home. Partner Chinky Apostol says, “He can execute hard-to-do dishes really well. Even the simplest dishes he can make so good. He makes the best mushroom toast. It’s so simple, but he is able to make the flavors come out.”

She adds, “At home, everything is natural. Even the butter is homemade. He has done a pretty good job in the house.”

Robby sure knows how to please people, Chinky most especially.

“She loves breakfast,” he says. “In fact, we don’t even have to eat dinner. She wakes up early and, if we’re at the beach, she’s the first one out there. That’s why in our house, it’s all about breakfast. She likes Fried Camembert, which she can eat everyday. It’s a whole Panko-crusted Camembert cheese and she can eat it all by herself. I make my own jam, too, which we serve with that. And some strawberry butter.”

If there’s anything Chinky swears by, it has to be Eggs Benedict, and one of her all-time favorites is the Lobster Benedict, which Robby prepares for her.

It’s a unique take on a classic, with a butter-poached lobster taking the place of the traditional Canadian ham. Fresh asparagus and tomatoes are added into the mix and a poached duck egg is used to top everything.

“I made that a long, long time ago,” says Robby. “We just started hanging out then and I wanted her to try something new, something different. She got surprised and thought that I got it from a hotel. She liked it so much that she finished the whole thing when it was supposed to be for the two of us. She couldn’t believe I made it, so she had me cooking another one just to prove her wrong.”

At Le Monet Hotel in Baguio, which Robby helped set up, a station has been installed solely for cooking Eggs Benedict. In that way, when the couple’s up there, Chinky can have her favorite breakfast fare whatever time she gets up in the morning. Now, how’s that for love?

2. Make the hollandaise sauce: Boil water in a sauce pot. While the water is boiling, place the egg yolks in a mixing bowl. Remove the sauce pot with boiling water off the heat. Let it cool for 2 minutes. Place the mixing bowl over the sauce pot and continue to whisk the eggs until the mixture thickens. Do not stop whisking the egg to prevent it from being scrambled. Remove mixing bowl from the sauce pot. While whisking, slowly pour the clarified butter in a steady stream. Whisk until all the butter has been used and the mixture is emulsified. Finish the sauce with the lemon juice, then season with salt and cayenne pepper.

3. To assemble, split English muffin in half, brush with butter and toast until golden brown. Meanwhile, soak the lobster in the butter. When bread is toasted, place tomatoes, asparagus, butter-poached lobster and poached egg on top of toast, then pour hollandaise over it. Garnish with paprika.