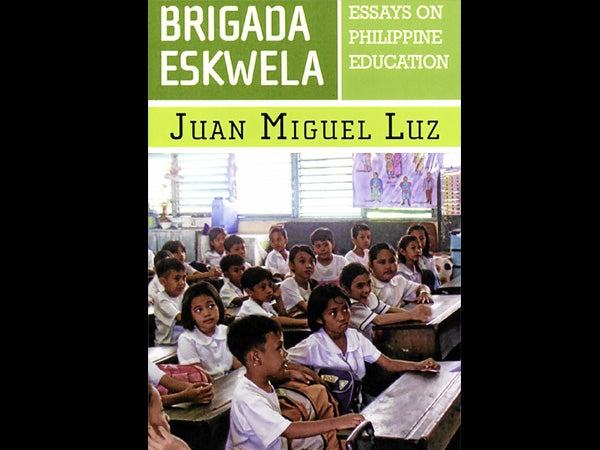 For a society that elevates education to the level of necessity, Filipinos are often and surprisingly perplexed by the varied and deep-seated flaws in the Philippine educational system. Many an armchair critic has complained about the deteriorating state of our schools and students, but thankfully, there are also those who actually take a whack at identifying the specific problems and providing solutions for them.

Such is the case of Juan Miguel “Mike” Luz, the bright educational reformer who toiled at the Department of Education as undersecretary for finance and administration from 2002 to 2006. When Luz refused to accept post-dated checks from Malacanang for a scholarship program in 2005, he remained famously defiant and stuck to his post despite being fired by then-President Gloria Macapagal-Arroyo. Officially a career executive service officer, Luz remained in place until he left the next year when the Civil Service Commission upheld Arroyo’s order.

Fortunately, Luz apparently learned a lot during his four-year stay at the DepEd. His thoughts about the state of Filipino schools have been collected and released as the book “Brigada Eskwela: Essays on Philippine Education” (Anvil Publishing, Mandaluyong City, 2011, 168 pages). Now an associate dean at the prestigious Asian Institute of Management, Luz brings an organized analytical eye to the flaws in the system and, most importantly, possesses the initiative to come up with creative and elegant solutions.

“Looking at how the system was performing, or under-performing, as the case has been, many questions percolated in my mind,” Luz writes in his preface. “Why was the entire system not delivering on the promise of quality education? Despite the large budgetary share in government, were we spending as much for education as we should be? Why is it that there are good teachers and even good schools, but these are isolated islands of excellence that do not translate into system-wide solutions? How do good teachers and good schools succeed in a milieu of lack of support? Why is excellence so elusive a goal in Philippine education?”

“Brigada Eskwela” starts off logically by discussing what Luz believes are the ills that plague the education system. These include problematic national achievement tests, a lack of functional literacy, a two-class educational system (private and public), low pay for public school teachers, starting school too late, and disadvantaged Muslim students, among others. Luz looks deeply into each one, attaching some very convincing numbers and illuminating the causes behind these unfortunate effects.

Most fascinating in “Brigada Eskwela” is the second part, where Luz offers up his ideas to fix our educational system’s faults, some of them actually implemented by the DepEd to a certain degree – everything from a longer 12-year educational cycle and a re-jiggered high school program, to a move away from the English-first approach to a school feeding system. The most interesting suggestion is the same one that’s proven to be quite successful in schools around the country, the one that this book gets its title from.

“Brigada Eskwela” is a nationwide program where individuals (parents, teachers, businessmen, neighbors) donate their time and materials to help fix up the schools within their neighborhoods. Officially called “Brigada Eskwela – the National Schools Maintenance Week” – continues to be hailed for its positive results.

“More importantly, Brigada Eskwela unleashed innovation at the school level we never imagined. Unfinished classrooms left abandoned by government contractors were completed by parents. A principal in Bacolod City took the ten-meter gap between two school buildings, closed and roofed it to make an additional classroom at a fraction of the cost of a new one because two already existing school buildings provided two of the required four walls of the new room,” cites Luz in his book.

That’s very much the can-do spirit of the book in general. Though Luz has a tendency to write densely at times and loves figures, he is a compelling thinker with similarly compelling arguments, particularly when he cites examples that make the broader concepts more concrete. The rest of “Brigada Eskwela” discusses managing reforms in continuity and several more ingenious ideas for possible implementation. It is hard not to be won over by the innovative and yet eminently practical ideas that Luz writes about.

In the end, “Brigada Eskwela: Essays on Philippine Education” is a cogent and clear-eyed look at the Philippine educational system with all its strengths and weaknesses, a most powerful argument for the continued evolution of the same system to address the issues raised here.

“The questions need to be continually asked not only because quality education is a never ending pursuit,” Luz concludes. “But more importantly, because getting our education system to perform as a system has been elusive and a persistent shortcoming all of these years.” •