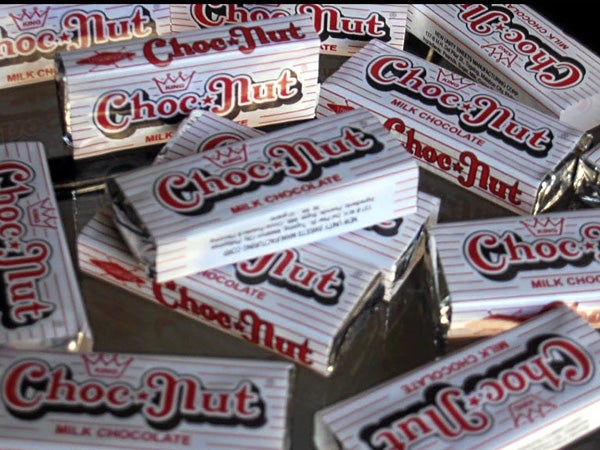 I’m sitting at the dining table watching my 8-year-old nephew Emilio devour one piece of Choc Nut after another, and I think to myself, so what’s the big deal with Choc Nut?

I asked the boy to describe the taste, but he just shrugged and said, “It’s yummy.”  Well, from the way he’s savoring each piece, I can see how yummy he thinks it is.  But I need more information than that.  I mean seriously, what does Choc Nut taste like? And why does Emilio and, for that matter, lots of Pinoys just love it?

Growing up, I always saw these little rectangular bars all over the place – from the candy shelves of our cafeteria counters, to supermarkets, to sari-sari store candy jars. Even when I lived in San Francisco, they were always the bestsellers in neighborhood Filipino stores.

But I have never tried Choc Nut.  And yes, when I admit this to my friends, I get the same puzzled look, the same questioning gaze and the same reaction, “HUWAAAT? YOU’VE NEVER TRIED CHOC NUT?”

Hey I’m probably not the only one! But yes, even though I love chocolates, especially chocolates with nuts, I have never in my entire 40-something years tried Choc Nut.

Before I eat my first piece, I thought I’d ask some grown-ups why they’re crazy about this local chocolate when they have at their fingertips a wide selection of chocolates made of the finest ingredients from all over the world.  Given so many options, why do they still gravitate towards this classic Pinoy treat?

Stockbroker Francisco “Pipo” Liboro declares: “It is probably the greatest Philippine invention.”  He was only half serious when he said that, but considering how long Choc Nut has been in the market and how loyal people are to this sweet, I think many people might agree with Pipo.  When asked what was so great about Choc Nut, Pipo explains, “This chocolate isn’t too sweet nor is it bitter.  But it was the crunchiness that hooked me.  I guess the crushed peanuts provided the perfect combination of milk chocolate and crunch.”

I also noticed that Choc Nut was quite a hit in the ad agency I used to work for.  My former executive creative director, the late Butch Uy, always had a pack on his desk.  Hmm, maybe that was the secret behind all those advertising masterpieces he used to come up with.  I decided to talk to my other former ad agency colleagues and they all gave rave reviews on Choc Nut.

So I asked a few more friends.  Neuron’s managing director, Boboy Consunji, said that what he likes about Choc Nut is how it melts in your mouth.  He started eating it when he was just 7. “It was a welcome break from coco jam, which was always my sandwich filling.  I would eat a lot of Choc Nut because it had a promo or some collectible printed on the wrapper.”

Creative director Ben Deluyas says that for him, eating Choc Nut is more than just about the taste, “It reminds of my childhood,” he says.  Boboy agrees, “It’s cheap, it’s sweet and most of all, nostalgic.”

Which could be true because some people I talked to can recall unforgettable Choc Nut moments.  Pipo says his earliest memory of eating Choc Nut was when he was just seven or eight.  “I was still in short pants so that must’ve been between Grade 1-4, or most likely Grade 1 or 2. We decided to stop at the tennis courts of Felicisimo Ampon along Cordillera street and beside Santo Domingo Church, just a block away from home.  In the premises was a sari-sari store.  I may have originally wanted to buy another candy, probably Serg’s as that was one of my preferred chocolate bars as well, but decided to try the Choc Nut which was kept in glass jars.”

For Rocky and her friends, Choc Nut was the way to a girl’s heart, the sweet guys gave to the girls they were courting. After all, it was affordable and a crowd favorite. How can you go wrong with that?

Don Bautista, managing director of Bacon and my former boss, remembers how he used to hide when eating Choc Nut because they were so precious, “I used to eat a whole pack in the bathroom because I didn’t want to share with my siblings.” He describes the taste as “peanut with attitude.” Hmmm, I like the sound of that.

For most people, the appeal of Choc Nut lies in its being the perfect combination of taste and affordability.  As Pipo recalls, “When I first bought it, it was cheap, like five centavos or maybe even two for five cantavos.  It was a cheap alternative to the more expensive chocolates and it easily fit into our allowance.”

Eating Choc Nut was a way for kids to enjoy chocolates without putting a major dent on  their limited budget. “It remains popular because adults like me have grown up with it,” explains Pipo. “For many who have moved away from local shores, Choc Nut represents a clear and unmistakable link to the home country, as it is one of those truly unique Philippine creation.”

Ben agrees, “It’s one of a kind, there’s nothing like it abroad.”

But does the appeal of Choc Nut go beyond the advertising world? Just to be sure, I spoke to people in more corporate circles.  Says Baby Orlina, a senior manager in a stock brokerage firm: “I like the buttery taste.  It’s different from other chocolates.”  Receptionist May Cagatin eats it her own way and claims she has discovered the perfect combination: “Masarap siyang pulutan with Red Horse! [It’s an ideal bar chow with Red Horse beer]”

Clerk Cristy Constantino describes it as the candy that she grew up with, “Nakasanayan na [It’s become a habit]. And it’s affordable.”  Emong Lim, stock trader, swears on its taste:  “I like that it’s sweet and buttery.” Even people who are not big chocoholics have a fondness for this local treat.  Says Dang Mendoza, a senior accountant.  “Hindi ako mahilig sa sweets (I’m not fond of sweets) but I like Choc Nut.”

While taste and nostalgia define Choc Nut memories, some people look at the chocolate as symbolic of something bigger, “When I bought Choc Nut with my allowance, it became one of the few and earliest times when I felt the gratifying sense of independence versus having to ask my mom to buy things for me,” Pipo recalls.

Indeed, Choc Nut has such a loyal following that chefs have tried using it in other dessert concoctions like Choc Nut Cheesecake or the Choc Nut Ice Cream at the old Uva restaurant in Greenbelt. Why, it’s become such a big hit among Pinoys in the US that store chains abroad like Walgreen’s stock the stuff!

With such loyal following all these years, I thought it was about time for me to try one.  What do you think Emilio, shall we share a pack?