Controversial book on pregnancy not as revolutionary as expected | Inquirer Lifestyle ❮ ❯ 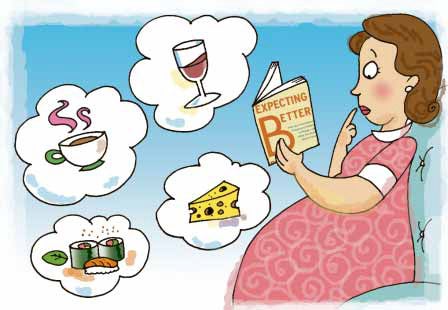 Controversial book on pregnancy not as revolutionary as expected 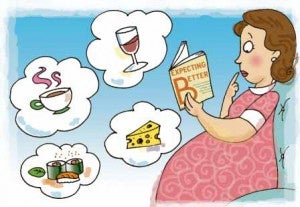 I remember my first pregnancy and my then pregnancy bible, “What To Expect When You’re Expecting.” I read it from cover to cover, earmarked pages and even brought it along with me during visits to my ob-gyn to discuss issues I wanted clarified. I found it absolutely amazing because it covered everything I was going through and answered every question I had, even before I could think about it.

For my second pregnancy, I simply dug out my trusty “bible” and kept it on a nearby shelf for reference. I was quite content to stick to it until “Expecting Better” by Emily Oster was recommended to me.

The book’s title, “Expecting Better,” and the subtitle, “Why the Conventional Pregnancy Wisdom Is Wrong–and What You Really Need to Know” were enough to grab any pregnant woman’s attention. I was excited at the thought of taking this pregnancy by the reins and seeing what new direction I could take it in.

However, as I read the book, I found it to be less revolutionary. Yes, there were some new things that I was happy to learn about (fertility rates in relation to age, vaginal birth after caesarean, sushi and cheese) but many of the popular concerns (coffee, exercise, epidural, alcohol before discovering you’re pregnant) still had the same answers as before. Only now, they were packaged with data from different studies to support the final conclusions of the book.

There were, of course, the chapters that focused on controversial topics (alcohol, for instance) which I suspect was what made the book popular. In a way, the book reminded me of Freakonomics, a nonfiction book explaining both random and not-so-random phenomena in society through economics.

“Expecting Better” was entertaining and thought-provoking, but it also had its expected share of controversy on its chapter on abortion.

Its author, Oster, is an associate professor of economics at the University of Chicago. Based on the tone of her writing, Oster appears to be very dedicated to her profession and is the kind of woman who will not take any information at face value.

She talked about her desire to have complete data, evidence and facts in order to make informed decisions with regards to pregnancy and delivery. She is, in her own words, “a little neurotic with numbers,” which I can imagine would make her a fantastic economist but a challenging patient for any doctor.

Oster was up-front on her lack of medical training and consistently reminded her readers that she is an economist and is simply providing the right information, as opposed to making actual recommendations. However, she contradicted herself several times throughout the course of the book and made strong recommendations for or against different things. Some were easy to accept and quite welcome, while some might raise a few eyebrows.

The best way to read it would, of course, be at the chronological beginning of both the book and a pregnancy. Using data and studies, Oster made a great presentation on the actual rate of declining fertility for women according to age. For too many years, women have been told that upon reaching a certain age, conception would be difficult and considered “high risk.”

Ten years ago, this subject never figured any of the conversations with my friends.

But as my friends and I get older, this issue has started cropping up, with the idea of how much time they have to start their own families. There is so much pressure from our culture on women to have children early because of the underlying belief that once you hit a certain age, it’s mission impossible.

Most people believe that children in your 20s is a cinch and that it starts getting more difficult in the 30s. But according to Oster, between the ages of 20 and 35, the chances of having children do not vary. This means that, assuming you have a regular and healthy reproductive system, it doesn’t matter if you are 21 or 35. You will get that baby.

But the bigger surprise is that between the ages of 35 to 39, women were still 90 percent as likely to have a child as those who tried before the age of 35. A 10-percent drop in chances is certainly a far cry from the doomsday message that has been so often announced.

The book also said that between the ages of 40 to 44, women were still 62 percent likely to have children, while those between 45 and 49 were 14 percent as likely to bear children.

With this as a starting point, the book impressed me and I decided to read on. However, I was disappointed that there was no discussion on the risks that may or may not accompany pregnancies with the different age groups. I felt if you really wanted to give women information, it had to be complete and not just that which was convenient to hear.

There was a full discussion on the challenge, risks and difficulty of sustaining a pregnancy for obese women, but that was about it.

Caffeine intake was also discussed. The final consensus was that a cup or two shouldn’t hurt the baby. But then again, between the findings on smoking and caffeine, it’s nothing most pregnant women haven’t already read or known for the last decade or two.

Then, of course, there was the much discussed portion of Oster’s book on alcohol. If I didn’t know any better, considering what I had heard about it, I would have thought the whole book was about alcohol!

But it turned out to be less than six pages. In those six pages, she detailed countless studies and papers, all of which showed that alcohol is fine (as per the author) for both baby and mother in moderate amounts, especially after the first trimester.

While a number of moms might happily accept this, it could be quite tough to sell on just as many. The risk of fetal alcohol spectrum disorder is not one that many people will take lightly, despite what Oster may say. She acknowledged that the American Academy of Pediatrics, March of Dimes and basically all American health organizations do not recommend any amount of alcohol at all; but she said that in most European countries, it is allowed and that tests that the AAP refer to also included women who were taking cocaine while drinking. Personally, I doubt the AAP would overlook a factor as critical as cocaine use while studying the results of the tests.

In the end, Oster stood by her findings that light alcohol consumption is harmless. I asked a number of friends about this and as expected, got either a delighted Yes or an adamant No. Issues like these don’t leave much space for middle ground. Personally, no matter how many tests showed how safe light alcohol consumption may be, for as long as there is one test that says it is not, I would rather err on the side of caution and listen to the organizations with medical degrees.

Moving on from one controversy to another, I found myself in the chapter on what food one could actually take and the risks involved. There were the usual suspects: sushi, cheeses, deli hams and mercury-tainted fish. All in all, far from being controversial, I found this particular chapter to be one of the most helpful and the one that broke conventional wisdom in the sense that it clearly stated what is the worst that could happen to you with any of these foods.

Knowing which food had the actual potential to truly hurt your baby versus food that would simply make you sick in the same way as any other person, allowed you to weigh the risks against how badly you are craving for that spicy, creamy salmon sushi and then decide for yourself.

As a whole, it was an interesting read if you were looking for deeper explanations as to why something is allowed or discouraged in a pregnancy. It was enlightening to see charts and studies explaining the risks of trying to go for a normal delivery after a CS, and interesting to read Oster’s take on bed rest, though I definitely would not take this book over an ob-gyn’s medical advice.

At the end of the day, if you are unhappy with what you are hearing from your doctor, go for a second, third or fourth opinion—but always from a licensed medical practitioner. There is always an ob-gyn out there who will fit your style and needs perfectly.