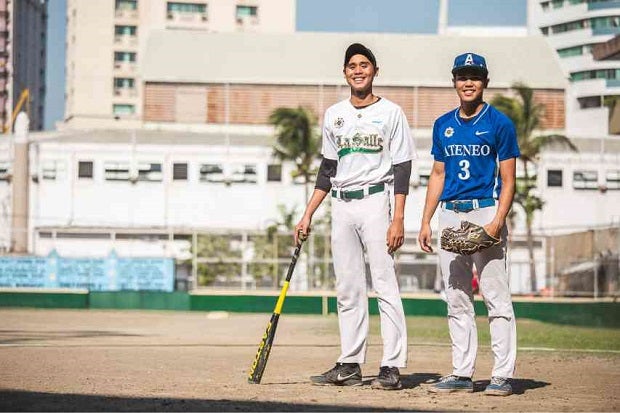 But the Laurel and Ramos siblings, the two sets of baseball brothers playing on opposite sides of the country’s fiercest school rivalry, admit it can get tough when a championship is on the line.

“It’s hard when you help each other and pitch in to make each other a better (player), then end up as competitors,” adds Matt.

The Laurel brothers, though, are not the only ones in a bind. Ateneo pitcher Kevin John and La Salle outfielder Kenneth Ramos know too well how their schools’ storied rivalry also results in muted cheers from their families on the bleachers.

“There’s more pressure when we’re (playing) against each other. I prefer that we’re teammates,” says Kevin. “Our parents also try to be neutral. In our games, they wear white, gray or red (not the blue and green colors identified with our respective schools).”

Although the separate allegiances of the two set of brothers has been a sidelight in seasons past, this year’s first Ateneo-La Salle baseball championship duel in the University Athletic Association of the Philippines (UAAP) magnified the double sibling showdown.

“During the finals we had zero communication, honestly. Even on Facebook or through text, zero,” recalls Kenneth. “I stayed at home, he stayed at the dorm.”

“I didn’t go home during the finals. I didn’t even call Kenneth up,” admits Kevin. “We were just too focused on winning.”

The Laurel brothers, though, could not help it: Coming from a family that virtually breathes baseball, a historic varsity match would be too good to pass up as a topic for discussion.

“Matt also stayed in the dorm and I stayed at home, but he’d be home often,” says Carly. “We talked before and during the finals, but more on how we saw the game and the events that happened. It’s not like ‘I beat you!’, so there. It’s more professional, not childish. We share ideas. I want him to be a better player. Why withhold information on skills when you can help the other improve?”

The Laurels point out that it is not like they are helping the opposing team run away with a victory. It is a sport, they stress, that hinges heavily on teamwork.

“We’re not the type of people who keep stuff,” says Matt. “We say, ‘You’re swinging like this and you have to change it, you have to get better.’ We always help each other out. He does the same with me. No one wants to play a championship game against someone who’s easy to beat.”

Matt and Carly’s father Arsenic Laurel, the manager of the International Little League Association of Manila (ILLAM), also knows his boys can handle their celebrated rivalry.

“It’s hard to watch a game when you both want to win. But my boys, they can take a loss,” says the elder Laurel. “My sons never cry because they lose. I tell them to just play as hard as they can, that’s all they can do. Crying is not going to change it. As long as they’ve given their best, no regrets. So I’m not worried.”

But, he adds with a laugh, “I’m more pikon (a sore loser) when I’m watching.”

So when the Blue Eagles ended up raising the UAAP championship trophy after a surprise sweep of the top-seeded Green Archers, the Laurel and Ramos brothers similarly took the result in stride.

“It’s kind of bitter sweet. I didn’t really cheer so much,” shares Matt. “I hugged (Carly). He played really well. It’s hard when the other good player in the rival team is your brother. It’s also tough because he did a lot of damage on the field, both  defense and offense. But my team had better breaks than his and my team was more composed.”

Says Kenneth: “Sure it hurts, but hats off to Ateneo for winning. They showed they wanted it more than us. Maybe their experience as defending champions was part of it. We both played our hardest. It just so happened it’s their game.”

Kenneth also sees it as a fitting farewell game for Kevin, the 21-year-old team captain who played his final season with the Blue Eagles.

“I have a lot of respect (for him). What a way to end his college career,” says Kenneth, a marketing management senior who has one more playing year with the Green Archers.

As the Ramos brothers played their final big game against each other, both agreed that the decision to go their separate ways in college turned out for the better.

Kevin says they grew up as practically inseparable in baseball since he first picked up the sport as a 9-year-old when an intramurals stint eventually turned into a varsity commitment.

“I knew nothing about the sport. During the intramurals, kailangan lang nila ng pang-puno (they just needed someone to fill up the spot),” says Kevin. “I just said okay. But I started to like it and became serious with the sport.”

Kenneth, who’s a year younger than Kevin, kept tagging along.

“It was a long process for me bago ko siya nagustuhan (before I started enjoying the sport),” admits Kenneth. “At first I wanted to stick to the sport because my brother was there and I can get to spend time with him. But over the years, I developed my passion for the sport and started taking it seriously.”

“During training we teach each other and point out each other’s mistakes,” says Kevin. “After training, we still do extra work together to practice our skills.”

The Laurels also had the baseball field as their playground at an early age.

“We trained in other sports like golf, basketball and football. Dad never stopped us from trying other sports,” says Carly, whose other brothers Jay and Dan similarly grew up with bats and mitts. “Even though we tried those different sports at a young age, baseball was really what came most naturally for us. We stuck to it.”

By playing the same sport, however, comparisons always come into play.

“It’s inevitable,” says Kenneth. “He (Kevin) is older, he’s been longer in the sport than me. In other words, he’s superior. But I don’t listen to (such talk). What matters is winning, rather than being better than this guy.”

The power-hitting Matt, the second of the four Laurel brothers, totes the most stellar baseball resume. Still, the Laurels think it’s not fair to compare the brothers.

“My four boys, they play different positions. They’re all good in the positions they play in,” says Arsenic. “Anybody who plays baseball knows you can’t just say that the catcher is the best.”

“To put it in basketball terms, it’s just like comparing a point guard to a center,” explains Carly. “You play different positions so you really can’t say one is better than the other.”

“If it’s athleticism or fitness, he (Carly) will probably win,” says Matt. “I’ll never compare myself to Carly. He hits differently, I hit differently.”

A member of the Philippine Team since he was 17, Matt saw action in numerous international competitions including the 2012 qualifier for the World Baseball Classic, the sport’s premier international tournament akin to the World Cup, in Taipei.

In the UAAP, Matt bagged the 2013 UAAP Most Valuable Player plum on top of the Most Runs Batted and Most Homeruns awards in the Blue Eagles’ first championship run. This season, Matt shone anew in their back-to-back title romp and collected the Best Slugger, the Most Homeruns and Most Stolen Bases awards.

Even in coaching, the 24-year-old Matt had a string of success as he steered ILLAM to the crown in the Asia Pacific and Middle East Championship that earned the team the right to represent the Philippines in the 2013 Senior League World Series for boys in the 15-16 age bracket in Maine.

“What impresses me most about him is he’s a guy who never gets satisfied, and an award doesn’t gets into his head. For him, an award is an award,” says Carly. “He doesn’t boast. He’s constantly trying to improve his game.”

The Ramos brothers are similarly proud of how each other has grown better in their game.

“I really see his passion for the game. He can be very intense, and for a teammate, that’s a good quality. If he really wants to win, he’ll do anything,” Kenneth says of Kevin, who just graduated with a degree in Interdisciplinary Studies last March.

For his part, Kevin says he likes how Kenneth always puts his team first. “He’s really a team player,” he adds.

Kenneth admits he’ll definitely miss their UAAP battles since his brother plans to focus on “finding a job.”

“There’s a thrill when we compete against each other,” says Kenneth. “When we’re teammates, we’re complementing (each other), which is good by the way. But when we’re (fighting) against each other in the game, it also brings out the best in me. I welcome the competition and the challenge, which is the purpose of sports—to overcome challenges.”

For Kenneth, Carly and the rest of the Green Archers, the next challenge is of course to snap the Blue Eagles’ UAAP reign.

“Carly is a good leader. He can carry the team and lead them to a high intensity game,”

La Salle coach Joseph Orillana says of his team skipper. “But Kenneth is also hardworking. When we give him playing time, he delivers. Yung pagkakapatid, hindi naging issue. Laban sila kung laban. (The sibling rivalry has never been an issue. They’re focused on playing the game.)”

Matt, a Communications student who’s playing his fifth and final year with the Blue Eagles next season, sees a likely repeat of the championship showdown between the two varsity arch rivals.

“It’s very possible that it may be a La Salle-Ateneo finals, I’m predicting it now,” says Matt. “My team is still intact. But both teams have blue-chip recruits coming in, the best in high school. It could go either way.”

While the Laurels hope to relish their final year on the opposite sides of the fence, they also can’t wait to team up anew, possibly in the national team. “We try to push each other all the time. I keep pushing him to show up in the tryouts for the national team,” says Matt.

“Definitely, I like playing with Matt,” says the 22-year-old Carly. “It’s always better because we have our own handshake and similar private rituals. Growing up, we’ve always been teammates. I always enjoy playing with him because he’s the type of player who will get in your face during practice when you do something wrong. I like that because he lets you know what’s wrong, but not in a negative way. It’s more a push to help you get better.”

“So when you  play against Matt, it’s hard. As his brother, I want him to play well and do good,” says Carly, before adding with a smile: “But just not against me.” •