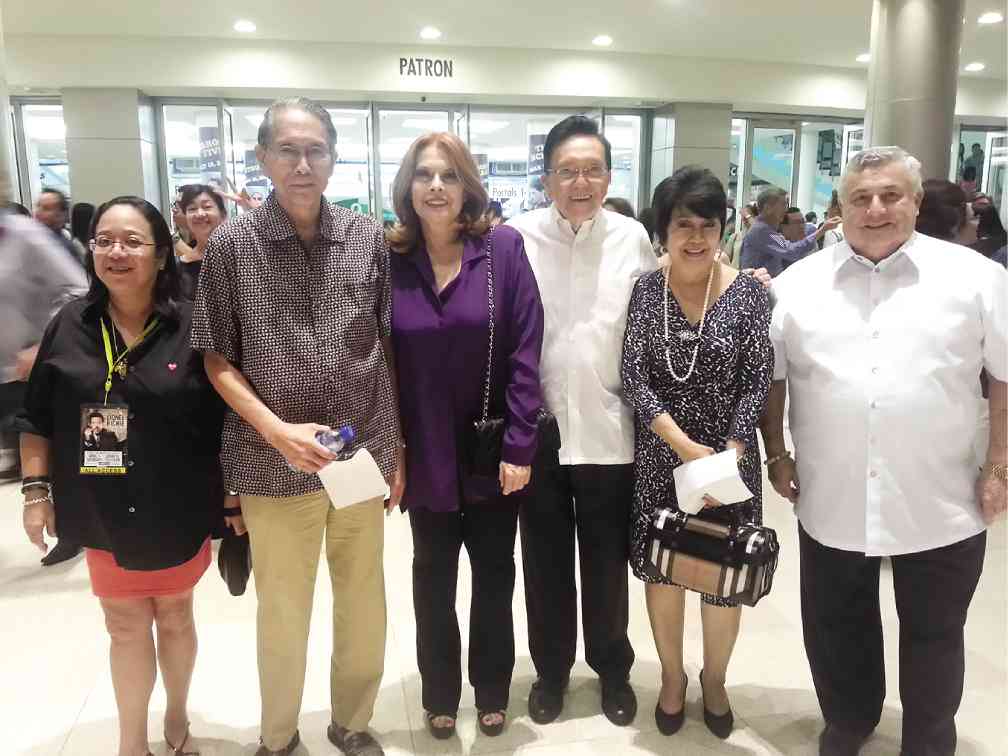 In the 1970s, contemporary music branched out into different directions, giving birth to heavy metal, funk, punk, jazz fusion and disco. These varied genres spilled over into the ’80s, many of the artists achieving major success and influencing lots of fans.

The recent Smart Araneta Coliseum gig of Lionel Richie, whose hit songs comprise two generations—the ’70s with his former band, The Commodores, and the ’80s as a solo act—had a number of Filipino baby boomers reliving the soundtrack of their youth.

Spotted at front row was Bureau of Internal Revenue Commissioner Kim Jacinto-Henares with husband Danby. Beside the couple were a few other government officials, though we didn’t see Henares’ big boss, President Aquino, who probably was either occupied with more important matters or not inclined to listen to Richie’s vintage funk, R&B and cheesy pop ballads.

Prominent members of the Araneta clan were likewise present, including Jorge Araneta with his wife Stella, Veana Fores and Judy Roxas. But Roxas’ son, Interior Secretary Mar Roxas, wasn’t there, although we caught his wife, ABS-CBN’s Korina Sanchez, dancing by herself.

Richie’s performance was inspired by memories of his previous visits to the country with The Commodores (the band recorded a song titled “Cebu” in 1975). In fact he sang quite a lot of Commodores material, including “Easy,” Three Times a Lady” and “Sail On,” which we mistakenly thought as part of his solo stuff.

By the time he urged the crowd to groove with him on “Dancing on the Ceiling” and “All Night Long,” the Big Dome itself was shaking—even if audience attendance was pegged at only 52 percent.

“Good evening, I’m Juan Miguel Salvador with the band Authority, and we play ’80s music,” intoned the frontman, whom we knew as the guy with the theatrical moves in his old band, Rage.

Salvador now leads Authority with a younger set of members, playing every Wednesday at Martinis in Mandarin Oriental Hotel in Makati.

On the night we visited, Salvador’s kinetic energy had him clambering on his keyboards, dashing toward his two guitarists to fiddle with their axes, and rousing up everyone to feel the power of the music.

The band performed quite a lot of songs on its first set—15 tracks that included a Queen medley. We liked the creative spin on “Bicycle Race” which segued to “Bohemian Rhapsody.”

But generally it would be great if Salvador stops trying hard to replicate the original versions of most of his repertoire. His talent deserves more than that.

Martinis’ beef salpicao, by the way, was yummy with red wine.

On the same Wednesday night, the band Mismo was having a ball at Strumm’s on Jupiter Street, Makati, a few hundred meters from Martinis.

When we arrived, Jong Cuenco, one of Mismo’s three lead singers, was playing the flute on the band’s version of “The Hustle,” one of the early hits of the disco years. This was a note-for-note rendition, but unlike The Authority, there was no effort to show off musical skills. Instead, there was just confident, professional performance, which was what mattered most.

Mismo’s manager, Rose Gomez Chia, was celebrating her birthday that same night; we had fun watching her let her hair down with friends on the dance floor. We also loved hearing Depeche Mode’s “Just Can’t Get Enough” interspersed with more ’70s disco stuff.

It’s amazing to know that Rico J. Puno has a debonair son, Rox, whose mestizo looks belie an earthy, soulful voice reminiscent of his father’s.

Rox fronts a band that plays every Tuesday at Aruba Bar in Metrowalk, Pasig.

When he sang “The Way We Were,” the husky tone of his vocals sounded so eerily similar to Rico’s, it reminded us of the wondrous ways that DNA plays in human beings.

It would be good for Rox Puno, who also plays the guitar, to include more Pinoy songs in his band’s repertoire.

Aruba’s crispy tenga, by the way, had a consistent, crunchy taste that went well with red wine.