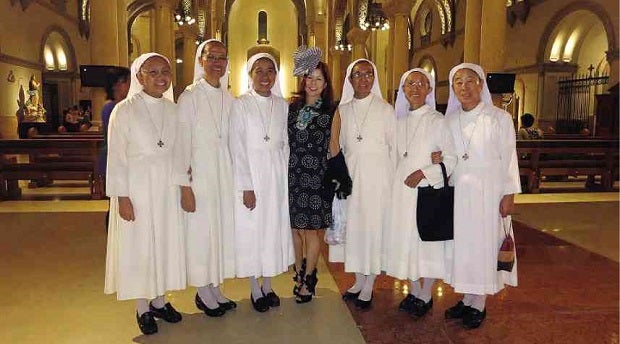 SISTERS of Mary nuns with Sea Princess at Manila Cathedral

Happy Easter, and cheers to the ‘new’ Manila Cathedral!

Happy Easter to all! It’s time to rejoice and celebrate life, especially for those who have gone through weeks of Lenten abstinence.

The historic Manila Cathedral—formally known as Manila Metropolitan Cathedral-Basilica of the Immaculate Conception—has plenty to celebrate with its reopening after two years of structural retrofitting. Manila Archbishop Luis Antonio Cardinal Tagle and a host of other bishops and priests recently officiated the High Mass that marked the ceremony.

The Manila Cathedral is now more beautiful than ever. It has brighter lights and an excellent sound system. Our country’s premier Catholic church is magnificently restored. The nearly half-century-old, Neo-Romanesque structure was also strengthened to better withstand earthquakes.

The cathedral’s origins date back to the 16th century and the structure has not been repaired since 1958. An assessment made two years ago said that key sections had notable cracks that compromised its structural

Just before the official reopening, I was able to visit the cathedral, thanks to my mother Marixi Prieto, who is a member of the Metropolitan Cathedral-Basilica Foundation. The Board of Trustees of the Foundation is composed of Cardinal Tagle as chair and former Ambassador to the Holy See Henrietta de Villa as vice chair.

Also present at the preopening Mass was former Chief Justice Artemio Panganiban and the other board members, Cecile Oppen, Letty Syquia and Danny Dolor, to name a few.

After the Mass, sound and acoustic designer Jiggs Hermano told me that he was still fine-tuning the system for the official reopening. His lovely wife Venisse Laurel was delighted to see the cathedral so brightly lit as she reminisced about their wedding in the same church years back.

My hubby Dennis and I will be celebrating our 20th wedding anniversary this year. Suddenly the Manila Cathedral looks like such a perfect place to renew our vows.

Then again, Dennis is so simple he might just prefer a quiet celebration with a couple of Magnum ice cream bars. We recently checked out the new Magnum Pleasure Store at the Skypark, fifth level of SM Aura.

Called Magnum Manila, it is the first flagship store here, with similar stores set to open in Milan, Cannes, New York and London.

Magnum once again proved its social network savvy as it opened with massive Instagram and Twitter posts.

Check out the Magnum Manila store soon, as it is going to be in the country only for a year. While there, be sure to “Make your own Magnum.” I’ve seen no end of creative Magnums being posted on various social networks.

I was able to create my own Magnum, too—the gold caramel coating with the most varied and sophisticated toppings, which include almonds and crushed chocolate chip cookies, freeze-dried raspberries, queso de bola, gold nuggets, chili flakes or sea salt.

The Manila Pleasure Store is arguably the best in the world, featuring the sleek, modern architecture of Ed Calma. Magnum has also collaborated with the executive chef of Chef Cuisine catering and owner of Nomama, Him Uy de Baron, for its savory dishes, and award-winning pastry chef, Miko Aspiras, for the sinfully delicious Magnum signature dessert offerings.

At the opening, I also had the chance to talk to Go Negosyo founder and RFM CEO Joey Concepcion.

He invited me to the inspiring and enriching sessions of the 6th Filipina Entrepreneurship Summit at the World Trade Center in Pasay City, attended by close to 7,000 participants.

At the summit, I was thrilled to listen to empowered women speakers like Sen. Grace Poe, Kris Aquino and Summit co-chair Alice Eduardo. Go Negosyo partner Myrna Yao of Richwell Trading was also present at the successful event.

A third forum was held, but this time it was Go Negosyo’s 3rd Filipino Technopreneurship Summit. The country’s tech giants Manny Pangilinan and engineer Dado Banatao were part of the insightful dialogue, facilitated by Maria.

That affair at the SMX Convention Center had over 7,000 people and a number of lawmakers. Senators Grace Poe, Cynthia Villar, Bam Aquino, Sonny Angara, Ralph Recto and Allan Peter Cayetano, showed their support.

Generous Alice Eduardo, a Go Negosyo advocate and supporter, and the co-chair of the 6th Filipina Entrepreneurship Summit was also present at the gathering.