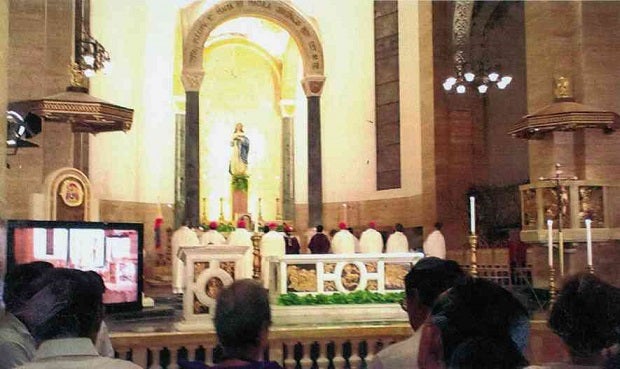 LUIS Antonio Cardinal Tagle and concelebrating bishops face Our Lady of the Immaculate Conception after the Thanksgiving Mass at the reopening of Manila Cathedral, while the choir sings The Magnificat in Tagalog. THEO CRUZ

Twenty-one years ago, on June 12, 1993, Pope John Paul II ordained two Filipino priests, Fr. Stephen Simangan and Fr. Gregory Gaston, in Seville, Spain. The two priests consider their ordination by the pope himself the turning point of their lives.

Fr. Simangan is a canon lawyer and the chaplain of the Philippine Coast Guard in Palawan. Fr. Gaston is the rector of the Collegio Filipino in Rome.

I met the latter on May 1, 2011 at the  office of Philippine Ambassador to the Vatican Mercedes Tuason during the beatification of John Paul II.

Because they were especially ordained by the pope, the two priests feel especially compelled to live good priestly lives.

In an e-mail, Fr. Simangan wrote that the ordination was held at the Seville Stadium. He said his heart was pounding as he walked toward His Holiness for the traditional kiss of peace and paternal embrace. He said he felt much happiness as well a sense of “unworthiness in front of a holy person.”

He added grace seemed to fill him with the strength to serve God and man well as a priest. “It seemed that there was nobody around, except His Holiness and me,” he added. “It was too overwhelming to describe.

“Now that he will be canonized and become one of our saints,” he wrote, “those ineffable feelings I had then, when he ordained me, are the same emotions I am feeling now. Put yourself in my shoes! Just imagine, the bishop who made you priest was the pope!”

He said the canonization is serving again a strong inspiration to renew his priesthood.

“It reminded me of the first zeal I had and made me renew the promises I made to Him—the zeal to defend the Church and to work for the salvation of all souls, the promise to practice poverty, to live faithfully a celibate life, and to obey my Bishop and his successors,” he wrote.

“It reaffirmed and gave me more courage to stand my ground as a priest. Most of all, it reminded me of the deepest humility needed to serve the Church and the people, following after the pope’s motto to be  “the servant of all servants”!

Father Simangan said he was ordained in Seville because of the opportunity to study there as a scholar of Opus Dei.

“I owe everything to them to be able to finish my theological studies, including my doctorate degree in canon law,” he said.

“It was during this period that there was a Eucharistic Congress in Seville, Spain,  where Pope John Paul II was expected to be present. They took advantage of his presence and included the ordination rites in his itinerary where I was one of the only 37 candidates from all over the world to be ordained by him during that occasion.

“It was God’s providence that it happened! Mama Mary, thank you so much!”

Manila Archbishop Luis Antonio Cardinal Tagle exhorted the 2,000 people present to commit themselves to the “true worship of the true God, not the worship of false idols like money and power.”

Parishioners from 92 parishes in the Archdiocese of Manila filled up the newly restored Basilica Minore de Inmaculada Concepcion.

After two years of restoration, the Manila Cathedral finally opened. With DM Consunji as contractor and engineer Salvador P. Castro Jr.  as project manager, the cathedral building was torn apart and put back piece by piece using the same materials.

The  building looks the same as it was when it was built by architect Fernando H. Ocampo over  50 years ago.

Castro attributed the faithful renovation to a miracle. Even Danny Dolor, a member of the board that raised funds and oversaw the restoration, said the same. It’s a miracle!

From cathedral to basilica

The Manila Cathedral serves as the seat of the Archdiocese of Manila.

Dedicated to Our Lady of the Immaculate Conception, patroness of the Philippines, the cathedral is located at Plaza de Roma in the Intramuros.

The cathedral was originally a parish church owned and governed by the diocese of Mexico in 1571, until it became a separate diocese on Feb. 6, 1579 upon the issuance of the papal bull, “Illius Fulti Praesido,” by Pope Gregory XIII.

The cathedral was damaged and destroyed several times,  since the original structure was built in 1581.

The eighth and current version of the cathedral was completed in 1958.

The last two visited the structure during their Philippine trips, and John Paul II issued  “Quod Ipsum,” declaring the cathedral a minor basilica by his own, “Motu Proprio,” on April 27, 1981.

It is propitious that, exactly 33 years after the cathedral was declared a basilica, Pope John Paul II will be canonized today in Rome with Pope John XXIII.