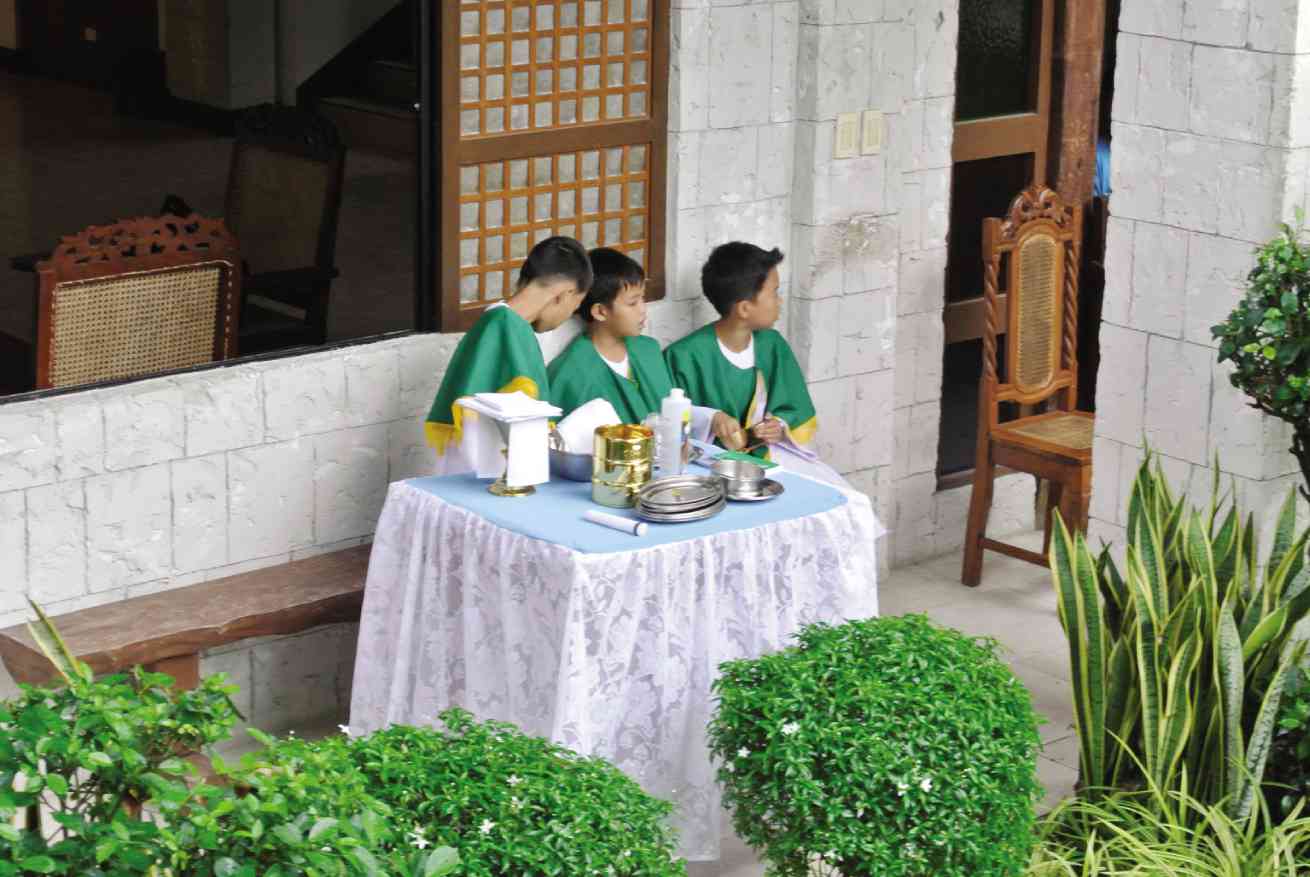 WHILE parishioners file into the temporary tent-covered area in front of them, sacristans wait for Mass to start at a makeshift altar in the front porch of the Baclayon Churh parish hall.

Here is an interesting response to last week’s column about leaving seriously damaged Bohol churches as ruins rather than totally reconstructing them.

“I am told that natural deformities [exist] in the base soil of the churches e.g. sinkholes, limestone natural tunnels, etc. If these churches are restored where they are, their foundations would always be suspect.

“I agree with you, make monuments out of the remains. Build proper, earthquake resistant churches.”

“But I disagree with you about Boholanos being the final decision makers,” referring to the emotional attachment many Boholanos still have toward their lost heritage and their natural inclination to restore.

Should they be the final decision makers, “I want to have a say because a portion of the taxes I pay will be used to assuage somebody’s hurt feelings.

“We have to learn to be more objective and more practical.”

Being objective and practical is undoubtedly the approach to take.

Before arriving at that point, it helps to have all stakeholders and conservation professionals harmoniously thinking the same way because they understand the rationale and approach for the work to be done.

The rationale and approach are a set of conservation guidelines which to most individuals are a hard-to-understand mumbo-jumbo of principles handed out from Paris by Unesco and Icomos that need to be interpreted by qualified conservation specialists. (A future column will discuss international conservation principles.)

Misunderstanding by stakeholders of conservation principles upheld by professionals sometimes breaks out into a divergence of opinions, or worse, into emotional issues difficult to resolve—and, speaking from experience, that’s putting it mildly.

Each person attending a meeting is coming from a page of his own, and it takes a lot of talking for everyone to finally be on the same page.

The issue at hand was pressing: There is an undisputed, immediate need for a temporary structure where parishes that had lost their churches can hold services, which now are held under temporary tents in church yards.

After completion of permanent church facilities, whether restored or new, the temporary structure will be repurposed into a parish school.

Preliminary designs presented by the project architect were presented, and after intense discussions, revisions were suggested with a concern that the architecture be “compatible” with the heritage architecture of the damaged church.

Agreeing on what was “compatible” architecture that did not look like an inferior replica or a modern pastiche of the damaged heritage church was almost impossible. There was more discussion, livelier this time, but no resolution was reached.

Where to place the new structure in relation to the original church was another thorny issue. Should it be adjacent, placed at an angle, or at a close distance to the heritage church? Another lively dilemma this was.

To solve the issue of placement, national and international conservation principles were decoded for the participants to understand.

Most importantly, Philippine law protects the churches as National Cultural Treasures under the supervision of the National Museum. Therefore they are subject to the protective and regulatory provisions of RA10066, the National Heritage Act.

Furthermore, since the Philippines is a signatory to the Unesco World Heritage Convention, our national heritage is further subject to international heritage principles that are specified in the Icomos-Venice Charter and the Operational Guidelines of the World Heritage Convention, the two major international resources for the conservation of heritage.

Both the Venice Charter and World Heritage Operational Guidelines stipulate that each heritage monument must be located within a protective core zone where nothing can be built, and further encircled by a secondary buffer zone to assure additional protection of the monument and its surroundings.

Therefore, following international guidelines, the temporary church structure could not be constructed within the core zone delimited by the official, titled boundary of the church property that surrounds the heritage structure.

Consensus among all groups was to construct the temporary church structure outside the church property, where design no longer had to “conform,” as long as its architecture appeared as a good neighbor that did not detract or call attention away from the heritage structure.

In some parishes, sites for the temporary church were properties located at a small distance away, leaving the core zone totally untouched.

As in most meetings, the process of arriving at a unified solution took a while; everyone who had anything to say was heard, and finally emotions subsided into logic that allowed consensus to finally happen, with everyone understanding why the decision was to build the temporary structure outside of the church compound.

We should talk to each other more about heritage so Filipinos see through the shrouded mystery that makes heritage untouchable. Heritage principles are actually proactive and not restrictive as we misunderstand it to be.