In ‘Ghost The Musical,’ something is really dead | Inquirer Lifestyle ❮ ❯ 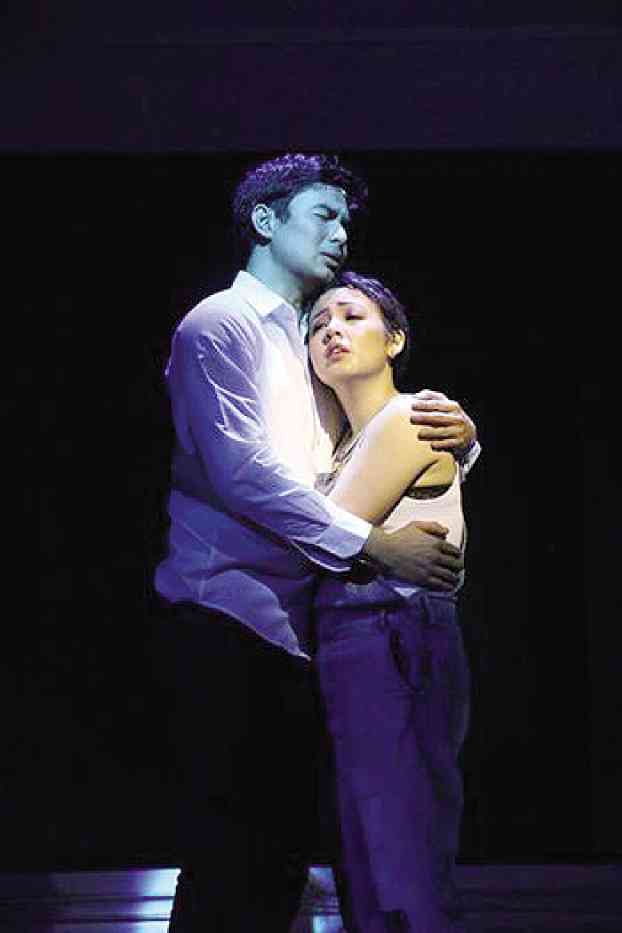 In ‘Ghost The Musical,’ something is really dead

Musicals based on movies are a tricky concoction, mainly because it’s rather impossible to predict that balance between faithfulness to the material and new creative input that would guarantee a respectable adaptation, if not a first-rate hit.

Take the case of two hugely popular Disney films. On Broadway, the critically acclaimed “The Lion King” has been running for 16 years and continues to earn more than a million dollars each week. “Tarzan,” in contrast, was labeled as “clumsy,” “cartoonish,” “attention-deficient” and “wrecked by its concept,” and closed after 16 months.

With this thought, one enters the Carlos P. Romulo Auditorium, where “Ghost the Musical” is playing until May 11. Minutes into the show, it hits you: Someone, or rather, something, is dead in this “Ghost”—inspiration.

Recall the film: an Academy Award-winning  hit and now undeniably one of the enduring celluloid romances of the 1990s. The story is about Sam, the titular ghost, trying to protect his lover Molly from his murderer (and former friend) Carl through the aid of the psychic Oda Mae Brown.

“Ghost” the movie is a master class in making an audience (perhaps excluding the heartless and the hifalutin snobs) swoon at its unfolding romance, shed tears over the tragedy of lost love, and laugh heartily at Whoopi Goldberg as Oda Mae attempting to cash a $10-million check in “tens and twenties.”

“Ghost the Musical” pretty much drags the whole movie onstage. But, along the way, it looks like the musical has dropped its heart.

“Ghost” is not exactly lightweight material—it’s stuffed with human issues. But the musical rings hollow.

The romance has been reduced to literal-mindedness, much of the comedy has been sapped out, and for the most part, this musical makes you feel like you’re watching a retelling of some melancholy-suffused tale, except that you’re no longer required to feel something.

It’s mind-boggling to think how Bruce Joel Rubin, who won an Oscar for the movie’s screenplay, could have written this plodding adaptation, one that tells the story in a fractured manner, somewhat like the way you’d watch an amateur marionette show at the children’s park retell “The Iliad.”

With the stark exception of “Unchained Melody” (which, by the way, is not an original from either movie or musical), most of the songs have the uncanny ability to pass through the ears like ghosts, unable to register in the mind.

The otherwise capable ensemble is even burdened with group numbers that seem to have been written just because the makers felt they were a requirement for a splashy musical. One of them, we now recall in shadowy snippets, has the ensemble scrambling atop furniture, supposedly to enact the daily grind that underlings of the Manhattan financial district undergo.

It’s a great shame that Atlantis Productions, whose track record includes some of the finest local staging of Broadway imports (the exceptional “Next to Normal” and “Avenue Q”), has to open its 15th anniversary season with a musical with such a soulless material.

If anything, “Ghost” is middling proof of director Bobby Garcia’s ability to steer his people in (mostly) the right direction, even as the ship they’re all aboard is hopelessly sinking.

How, by the way, is pop balladeer Christian Bautista in the role of Sam? He’s all right, actually—not exactly enough to make you jump up and down your seat, especially given that weird look of bewilderment on his face in all the emotionally charged scenes. But it’s a decent turn.

The songs sit comfortably in Bautista’s willowy tenor, and he even treats us to a memorable “rock-ified” rendition of the musical’s only inherently memorable song, “Unchained Melody.”

The only remotely cartoonish element in Bautista’s Sam arises during the fight/action scenes. Which is to say, if the man has any ambition of becoming a kung fu star, he needs more practice with his moves.

In contrast, Cris Villonco is simply devastating as Molly, the role of Demi Moore in the film. Eternally saddled by a seemingly unspeakable sadness, her slender frame almost too delicate, her voice half-drowned in tears, Villonco’s Molly is, at times, almost too painful to watch.

It is this very pain that Villonco brilliantly translates into music, elevating her big Act I solo, “With You,” from being just another sob song to a searing anthem of human despondency, along the vein of Les Miserables’ “I Dreamed a Dream.”

And of the two other major characters? Hans Eckstein, in his first big stage role, is an annoyingly sinister Carl with a dreamy singing voice that has difficulty swimming past the roaring chorus.

The role of Oda Mae Brown is a tougher call: Its linguistic and behavioral peculiarities, plus the fact that Goldberg originated the part, have cemented it as an African-American woman’s part.

The good news is that Ima Castro does not, at any point, attempt to be a mere Goldberg impersonation. Instead, she makes the role her own—a sassy, perky, occasionally vulgar woman who appears to have wolfed down an amplifier.

Witness Castro attempt to bring the ceiling down in “I’m Outta Here,” her big solo written like a nightclub act, complete with her name in neon marquee and her body garbed in a skimpy red dress.

All this happens on Otto Hernandez’s admirably economical and functional stage. A wall of stainless white cloisters the performance space, and when Sam’s ghost appears onstage, it not-so-obviously conveys the sense of his being “trapped” in the in-between.

This same wall also serves as an all-around canvass for GA Fallarme’s projected backdrops (the scene where Sam and Carl are “riding” an elevator is excellent), but one sometimes wishes the images were of a higher resolution.

The lights (by Dong Calingacion) do a serviceable job in identifying who’s dead and who’s alive, and the flying objects shtick is mostly a recycled technique from last year’s “Carrie.”

But Bautista as a ghost passing through doors happens in too dark a spot to even be appreciated. Here, the word “illusion” is apt: the illusion that something is even happening.

Those looking for something really fresh, something genuinely rousing, would have to wait till the middle of Act II—yes, it may seem like an endless search at first—for the solo number of the hostile subway ghost, played by Jamie Wilson.

The title of the song is “Focus,” and—surprise!—it’s a rap number. Suddenly, as Wilson vibrantly tackles the tongue-twisting demands of this number, with sparky lyrics that go, “Now feel the tension/That’s the key factor/Focus your attention like a nuclear reactor,” this increasingly tiring piece of theater acquires a sheen of novelty.

Truth be told, it’s quite tempting to bob one’s head, tap along to the rhythm, maybe even shout, “Uh-huh, uh-huh!” or some other random hipster phrase in response to this unexpected moment of authentic creativity.

Throughout this song, the subway ghost teaches Sam how to move things like a poltergeist, and every now and then, Sam would exclaim lines like, “What am I doing wrong?”

During those moments, though, a different thought interjects in the mind: “It speaks!”—in reference, of course, to the entire show itself.