Will Flip-Hop Save OPM? | Inquirer Lifestyle 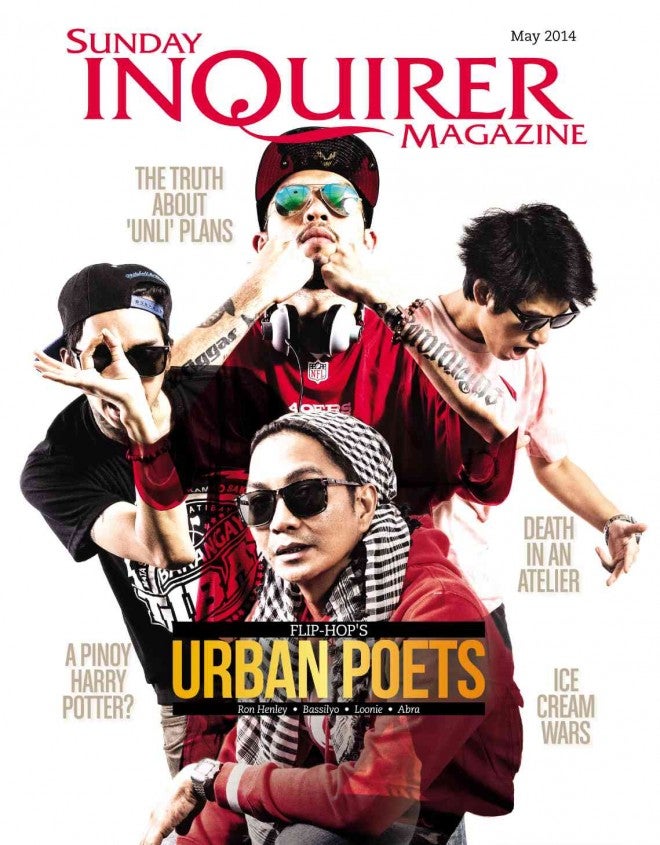 OPM’S not dead—it was just beginning to smell funny.

But thanks to a new generation of Filipino rap MCs (emcees), possessed of mad verbal skills honed in the trenches of the FlipTop Battle League, its atherosclerotic heart has received a much-needed jolt of adrenalin.

While not exactly in the pink of health, OPM has, at the very least, been reanimated for the time being.

The local music scene hasn’t seen this much crossover excitement since the glory days of the Eraserheads and the “alternative rock” avalanche they unleashed in the mid-’90s.

Kids are actually buying CDs again, a rare occurrence in an age of digital downloads.  Hip hop songs such as Abra’s “Gayuma” and Bassilyo’s “Lord, Patawad” have been ruling the charts (although these days, the charts are measured in terms of YouTube hits rather than CD sales).

Even the mainstream has taken notice.  Last year, “rap battles” featured prominently in noontime shows, and the networks scrambled to get name MCs on their programs.

“We are the new Mecca of hip-hop,” says Loonie, a.k.a. Marlon Peroramas, one of the leading lights of the new school Flip-hoppers.

Hip hop may be on the wane in the land of its birth, he says, but we Pinoys are in the midst of a golden age of hip hop, and now rappers all over the world are looking to us to get our views.

“It’s like a second coming of hip hop: new artists are emerging, albums are selling, shows are packed.  This has never happened before, it’s only now that we see a multitude of hip-hop artists coming up at one time.”

We have actually gathered a representative sampling of the new school to show Flip-hop’s diversity: apart from Loonie, there’s his Pasig homeboy Ron Henley (yes, his real name) and Bassilyo a.k.a. Lordivino Ignacio, the man behind the hit song “Lord, Patawad.”

Last to arrive is baby-faced sparkplug Abra, a.k.a. Raymond Abracosa, arguably the MC who has penetrated furthest into the mainstream with 27.5 million views (and counting) for his “Gayuma” video and a song on a  network telenovela soundtrack.

Again, not since the Eraserheads have the recording companies invested this much capital in releasing relatively new artists, and seen a return on their investments.

If there’s one thing that separates the new school hip hop artists from their predecessors, it’s their time in the trenches of the FlipTop Battle League, the home-grown rapping competition founded in 2010 by rapper Anygma, which was patterned after the US Grind Time battle league.

Rap battles have been around for as long as hip hop.  Basically “cutting contests” in which MCs challenged one another to see who could come up with the most scathing insults, the snappiest putdowns, the wittiest comebacks, all set to the most excellent rhymes, the form entered mainstream consciousness after Eminem’s film “8 Mile” hit the screens.

With lyrics often composed freestyle, or spontaneously on the spot, battle rap quickly separated the men from the boys, the MCs with the skills to pay the bills from the wannabes.

In a matter of months, FlipTop snowballed from a handful of hardcore enthusiasts to millions of hits on YouTube.  Within a couple of years, FlipTop surpassed its American model in terms of YouTube hits. (One classic battle alone, Loonie vs. Zaito, has over 13 million hits.)

FlipTop also resonated deeply with the Filipino audience, who are culturally receptive to verbal jousting and displays of linguistic skill, thanks to the tradition of the Balagtasan and other folk forms that involve poetic improvisation.  Although most academics took pains to point out the differences between battle rap and Balagtasan (most notably the absence of four-letter words in the latter), most members of the lay audience couldn’t care less, embracing Filipino battle rap as “the new Balagtasan,” a legit art form in its own right.

“It was a big help,” admits Bassilyo, speaking in his characteristically deep Tagalog.  Hailing from Malanday, Marikina, Bassilyo is, at 36, something of an elder statesman for the group, having started as an MC way back in 1996.

“We used to sell tickets just so we could perform at Club Dredd,” he recalls.

After Francis M. died in 2009, the local hip hop scene was in the doldrums, he recalls.  But thanks to FlipTop, the scene has been reinvigorated.

“Sometimes you get nervous when you get up to sing, more so when there’s an opponent waiting to get back at you,” he says.  “Sometimes you choke and you are forced to freestyle, you turn your opponent’s words against him.  It keeps you from being lazy.”

“As Bassilyo I combine everything I have learned about making poems and rapping.  I put in melodies, and variations.  I tell a story, often with a twist, and 90 percent of what I write is based on my life experiences.”

Apart from his solo work, Bassilyo also performs with his cohorts Crispin and Sisa as Crazy As Pinoy.  Having grown up in Marikina among natives of Bulacan and Binangonan, Bassilyo has an ear for pure Tagalog idiom, which he injects into his rhymes.

“I want to bring out the real Pinoy flavor in my work,” he says.

“A rapper’s first aim is to reach as many people as possible with his words.  The more people hear my words, the better.  I want to reach young and old alike, that’s why personally I prefer the mass audience.  It would be a waste if we kept our lyrics for just the hip hop audience.”

Thanks to the crossover success of “Lord, Patawad”, it would seem that Bassilyo has realized his wish; his mall tours now see entire families in the audience.

For Loonie, the Internet has been critical to new school Flip Hop’s success. 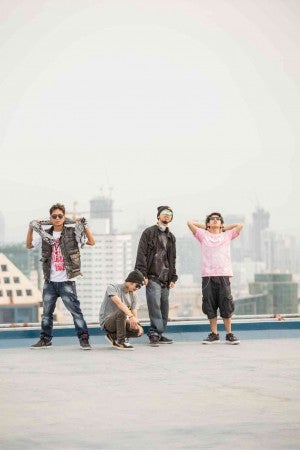 “Kids in the Philippines are tech-savvy, and there are internet cafes everywhere you go,” he says.  “That probably explains why FlipTop gets millions of views on YouTube.  The battle leagues in other countries are wondering how we can get so many hits, they think we’re padding the figures.  Where they’re from, one million hits is a lot, but in the Philippines, it’s commonplace to get 10, 15, 20 million views.  So you could say that it’s the Internet that has made Pinoy hip hop mainstream.”

Coming up in Pasig City, where Ron Henley was a year behind him in high school, Loonie gives props to Francis M.

“Without him there would be no Pinoy hip hop culture,” he says.  “The man was an artist.”

Loonie cut his MC teeth backing up Francis M., while juggling an IT course and a succession of call center jobs.  All the dues-paying have made him a formidable wordsmith, and he gets props from other MCs.

“I use conversational Tagalog in my rhymes,” he says.  “It’s more freestyle.  I used to practice composing lines in my head, without writing them down.  I started with eight lines, and worked up to 16 lines, straight to the mike, without putting them down on paper.  That was how I wrote ‘Ang Bagong Ako’ which I recorded with the Greyhoundz.”

Although he prefers to keep the language simple, one line can have two or even three interpretations.  A good MC can compose verses with many layers of meaning, he says.

“Sobrang free,” he continues.  “This is the most open genre, and you can inject it into any other genre.  For me rap is the most versatile style of music, and one of the most extreme forms of public performance or performance art, because it’s spontaneous, it’s raw, because whatever you’re feeling you can express on the fly, on the spot.  It’s like poetry, sports and music rolled up into a single entity.  That’s why battle rap is so interesting to the youth, it’s like drama to them.  You can learn about the state of society through listening to battle rap.  You can find universal truths in it that you won’t find in today’s sugar-coated media.  You’re going straight to the source.”

Much has been made in the press of Abra’s suburban origins (he came up in the mean streets of Valle Verde, and went to Colegio de San Agustin, not exactly a hotbed of hip hop).

“It’s not really my choice, and I can’t exactly deny it just for the sake of being ‘street,’” he says.

“It’s hard being an artist these days, because of widespread piracy, and also because there’s a lot of hate within the community, and outside the community.  But I’m glad because OPM artists are so supportive of each other, regardless of genre.  They’re more open now, just like the Internet which is open to everything.”

From a young age, he recalls, he roamed around freely, being an adventurous sort, gathering material for future rhymes.

“My rhymes incorporate what it’s like to be me, how I grew up as Raymond Abracosa in an environment without hip hop around me.”

By his own account, Abra was a late bloomer as far as hip hop was concerned.  He was already in third year high school when he discovered Pinoy hip hop via Gloc 9 and the Stick Figgas, and found himself enamored by these artists’ lyrical gift.

“How can anyone think it’s baduy (gauche)when it’s so hard to write, multi-syllable rhymes, and not just last syllable rhyming?  How can you form a perfect thought in a perfect verse with a unique rhyme scheme?  I loved the art that also seemed to have a science within it.”

Eventually, Abra formed the Lyrically Deranged Poets with a couple of like-minded MCs, and like most of the new school found himself centerstage sparring with other MCs at the FlipTop battles.

“The battle is where you sharpen your sword,” he says.  “It’s like a slam dunk competition, it’s a battle of skills.  Hip hop is really a warrior sport.  You know that the people listening to you are going to judge you.  You need to always be hungry, because people will know if you don’t have that hunger.  You’re not out to please the audience because you’re just making your music, but they will judge you.”

Like the other MCs, Abra is surprised and bemused by the mainstream’s embrace of Flip Hop.

“It went beyond my expectations, that’s why I’m so grateful to those who support us and listen to our music,” he says.  “But I’m also grateful to those who want to pull me down, because they’re the fire that fuels my drive.  If you have the blood of a battle MC, you want to get back at those who criticize you.  The love and the hate: that’s what inspires me to do my best.”

As far as mainstream acceptance is concerned, it doesn’t really bother Abra. “What else can you do if you make your music and a lot of people happen to like it?  Why limit yourself to the underground?  Just because you’re mainstream doesn’t mean you can’t go underground, and vice versa.  It’s just a matter of platform: if you’re a good artist, you’re a good artist.  But if the people like you, then you have no choice, you’re going mainstream.” •